A tiny African tribe, the Hadza continue hunter-gatherer lives on the edge of the sedentary world. They recognize no official leaders, but vote in national elections for the most practical reasons.

GUIDA MILANDA — It's election time in Tanzania. And though the nomadic Hadza tribe won't be changing their ancient ways, they will find the path that leads to the voting booth. These archer hunter-gatherers are camped in the north of Tanzania, not far from the Kenyan border. The women gather berries and dig up roots. Men, when they're not collecting honey, shoot poisoned arrows at giraffes and baboons.

The African country's smallest ethnic group, which counts no more than 1,000 people, recognizes no official leaders nor property rights. Nevertheless, this ancient people weighs in regularly on modern politics, participating in last October's Tanzanian presidential election, casting their ballots in a polling station set up in the rugged bushland.

If the Hadza take no orders, share food and are peacefully bound one to another, their world is hardly some benign state of nature envisioned by French philosopher Jean-Jacques Rousseau. In the east African savannah full of acacias, hunger often reigns. Sometimes, they must request help from neighboring tribes. Wild animals are everywhere, with the proof in the marks left on the hunters' skin by snake, scorpion or leopard bites.

The search for food is endless in Guida Milanda, a camp that is lost on the sandy banks of Lake Eyasi. The Hadza have never converted to farming or livestock breeding, activities born some 10,000 years ago in eastern Mediterranean. They continue living day-to-day in camps of about 30 people and do not store food nor set-up production plans. Armed with bows and arrows, they go hunting every day seeking game through the thorny shrubs. When the wind is blowing and the mammals are hiding, the nomads shoot flamingos or little white owls.

Still, when elections roll around, they take the time to vote. Most of the Hadza back the ruling Chama Cha Mapinduzi (CCM, Party of the Revolution) who have held onto power since the independence of Tanzania in 1961. This political strength, founded by the father of the nation Julius Nyerere, is still popular in rural areas, particularly thanks to food assistance programs.

"Why do I vote for the Party of Revolution?" ponders Onwas, an old archer from Guida Milanda who doesn't know his own age. "Well, just because they are the best. They don't forget the Hadza, they give us food." 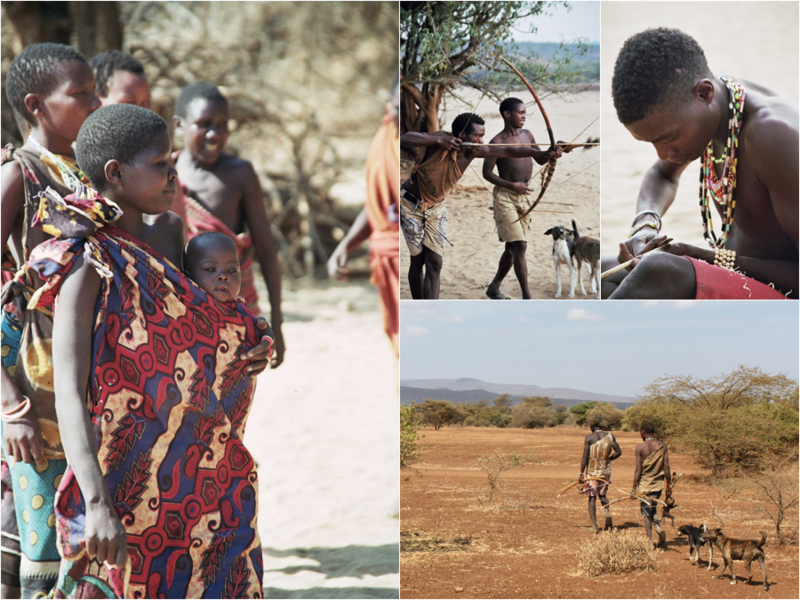 However, the last time he went with members of his family, in a village 70 kilometers north from his camp, to take back the promised 100 kilograms of government-supplied ugali (corn flour), Onwas left empty-handed. A public servant just asked him to use his thumb dipped with ink at the bottom of a page as signing.

Still, the Hadza rarely worry for too long about failire, as the notion of "planning" is foreign for them. So Onwas says he just smiled and went back to the path of Guida Milanda. Hunter-gatherers targeting baboons and zebras aren't a priority for the government in a country where agriculture engages 80% of the population.

Over the past century, the Hadza have lost around 90% of their territory. Year by year, the game they hunt has been reduced despite tremendous animal reserves around Lake Eyasi: Lake Manyara National Park in East and the mythic Ngorongoro Crater in West. They have been removed to a place — a thorny and infertile savannah — that is occupied by herds of goats and zebus belonging to the Datoga tribes from Sudan. Looking for new grasslands, these herders lead the cattle further up into the hills where the hunter-gatherers are living. The cattle are drying up watering holes and their hoofs trample the plants that ensure food balance in the tribespeople's diet.

In 2011, the CCM-led administration enabled the Hadza to get customary land rights of more than 20,000 hectares in the southeast region of the lake. Among the some 120 ethnic groups in Tanzania, the nomadic hunters benefited from the decision along with their Datoga neighbors and herders. But how to know until what point the Hadza territory extends?

Nobody knows exactly where these mysterious hunters come from. They don't leave traces, except arrowheads, a few stones blackened from fire and some scratches on the acacias. Over the past centuries, they welcomed into their society farmers ruined by droughts, herders deprived of cattle, alcoholics facing piles of debt. As in any society, the Hadza community is less a biological reality than a lifestyle, coming from "the bow civilization," the oldest surviving one in the world.

In spite of their customary land rights being recognized, the hunter-gatherers have learned to count only on their own resourcefulness, and not on anything that might come down from the sky. No recognizable form of religion exists in the society.

When we asked the elders, we discovered their spiritual secrets that are closer to taboos, focused on a single word in their Kiswahili language: epeme. Simultaneously, it refers to a passage, a privilege and a tribal identity. It embodies the transition of hunters into adulthood. When a young Hadza manages to kill a large animal, he is entitled to remove organs from the game: livers, testes, heart. Then, on a moonless night, fellow men of the tribe open the dance circle to him. The one who doesn't respect the steps of the epeme rite, like eating an organ, is guilty of serious misconduct and will bring the group bad luck.

Sulphur-yellow huts, strong wind, a few antelope skins drying in the sun: We have to content ourselves with the essential in Guida Milanda. The fire is lit with sticks twirled between palms; the meat is placed directly on the fire; tamarind bark is used for drying hands.

Just as women, men are "serial monogamists." Most Hadza change spouses every few years. Marriages come and go. In spite of hunters' radical individualism, personal aspirations are rarely in conflict with requirements of a common life. The archers move freely. Sometimes, they disappear for days at a time. Nobody thinks about supervising them or taking advantage of their absences. If an ongoing conflict arises between two nomads, one of them simply decides to move to another camp.

Most Hadza are small with a lean body and yet suffer frequently from a chronic cough due to use of tobacco and marijuana. The hunters can easily follow an animal that escapes in the shadow, between ditches and thorny foliage. But there is also the pursuit of honey, calling out to the passerines who are guiding them to the hives hidden in the hollows of trees. Hunters take off their sandals, climb up onto the branches and chip away at trunks with axes before coming back down with cells flowing with honey. Birds take debris that they leave behind them as a fair exchange of goods and services.

In the evening, archers gather their arrows and check the piles of torches. In a single set, they are able to kill an antelope, a warthog or a monkey. If a lone hunter manages to catch a large mammal, he brings it back to the group. The nomads have very little but give everything away. There is no ostentation, no search for prestige in this profligacy. The distribution of goods occurs according to need. Equality is practiced, and thus doesn't have to be claimed.

Around 400 Hadza have decided to live at the edge of the sedentary world where they have developed a "show" for tourists: hunting trips, archery training, sale of craft products. The show is often faked. Several extras – impoverished Bushmen – pretend to be Hadza without even knowing their language. This "bush comedy" is organized by unscrupulous travel agencies, with support from local guides who are living hand-to-mouth.

Dressed in a baboon's skin and making grunting noises, hunters exaggerate the features of their culture to play to the vision of romantic fictions. The West wants to see "living fossils" in these nomads and primitive people who have endured in time and remained the same. The Hadza perfectly understood the character of these fantasies and manage to make them true with a notable flexibility.

Although they are no more than 1,000 people in total, and that their possessions can be summed up in bows and arrows, these hunters do not worry about vanishing. They know who they are. They frequently repeat "We are Hadza." Their society has traveled through millennia, evolving in contact with other peoples. They borrowed a few inventions from the modern world — t-shirts, flashlights, corn flour; but have foregone other crucial ones: authority, accumulation of goods, social inequalities.

If they eat impala fetuses, wash and rub themselves with stones, they also know how to make use of the city, where to find food aid offices and use Secure Digital memory cards to listen to music on their mobile phones. An anarchist stronghold at the heart of the Tanzanian savannah and far from the concerns of the Party of the Revolution or the presidential elections, the archers' community keeps its gaze toward the future with a quiet confidence. No one can force a society to doubt itself.

As Tanzania seeks to decongest Africa's fastest growing city, more women are stepping up to become registered as professional engineers.

A Trip To Rehab With Zanzibar's Heroin Addicts

DAR ES SALAAM — Sitting on a stone bench, in a shaded back alley of the historical center of Stone Town, the capital of the Zanzibar archipelago, Ali Nassor Ali is making ...