Pope Francis' recent encyclical on the climate had a major blind spot: cattle farming and meat consumption. Nowhere is the damage more evident than his native Latin America.

BOGOTÁ — Pope Francis should have cited the harm meat and meat-eating are doing to the planet in his encyclical on the environment. Perhaps Adam was banned from Paradise not for biting into an apple, but for trying his first steak.

Our close ties to livestock farming began about 9,000 years ago. DNA tests have shown the presence of domestic livestock in southeast Asia and India about 6,000 years ago, an evolution of that small proportion of herbivores that were prone to domestication. The zebu bull for example, had descended from wild aurochs that are now extinct but were immortalized in cave paintings like those of Altamira in Spain. They seem to have died out around 1627, the last one having been seen in Poland.

Domesticating animals is a source of salvation that turned into something of a curse. In contrast with our vegetarian ancestors, humans could develop a bigger brain thanks to eating meat, a "detail" many vegans forget. But with livestock and animal farming came diseases: tuberculosis, measles, smallpox, flu, whooping cough, malaria, field fever and ailments of similar origins. Measles, for example, is just one variant of bovine typhus, which mutated and became lethal to humans who lived surrounded by their livestock's fecal matter and pustules. The most horrific of pandemics, flu, may have had its source in poultry and ducks.

Livestock may be one of the greatest sources of new bacterial strains. Consider how the guts of ruminants are a giant cauldron of microbes where food is turned to the fatty acids that provide the animal with energy. Infections that then require the use of pharmaceutical drugs and antibiotics appear when livestock are fattened up through intensive feeding. The continuous use of such medications favors the appearance of increasingly resistent strains of pathogens, some of which are potentially lethal to humans.

In terms of pollution, information from the United Nation's Food and Agriculture Organization (FAO) indicates livestock to be one of the biggest sources of greenhouse gases, emitting more than cars. Bovine manure and "escape valves" are estimated to emit 65% of all nitrous oxide (300 times more polluting than CO2), 37 of all methane associated with human activity and 68% of the ammonia present in acid rain.

Livestock are also one of the main causes of soil degradation and water pollution. More than 30% of the earth's surface is used up to produce food and raise cattle, excluding the immense expanses of land devoted exclusively to producing corn, just to feed the livestock.

The worst environmental disaster is happening in Latin America, where cattle farming is one of the main causes of deforestation. Producing 1,000 calories of beef requires 36,200 calories, primarily of grains and feed, three times more than the amount required for pork and four times more than what's needed to produce the same quantity of poultry meat. Producing that quantity of meat requires an average of 1,642 liters of water, much more than required by pork and poultry industries together. 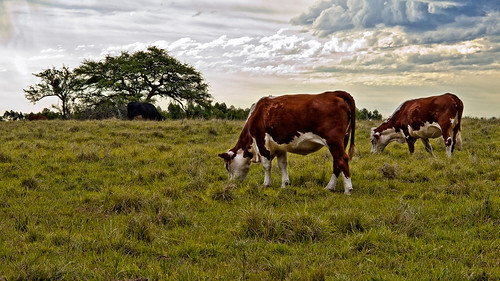 Overgrazing causes massive soil degradation and is a leading cause of desertification. Production of feed requires enormous amounts of water resources and its residues pollute rivers and seas. The FAO estimates this to be a direct cause of nitrogen and phosphorus pollution in the South China Sea, and directly responsible for much of the loss of biodiversity in marine ecosystems.

Socially, in contrast with crop farming, cattle raising provides very few jobs. One of the world's biggest ranches in Texas needs just seven people to manage 43,000 head of cattle. In Colombia, massive estates almost as big as entire counties may typically employ a couple of cowboys who live in conditions comparable to those of medieval serfs. And unlike Europe and the United States, land taxes are derisory.

Finally, there is the issue of the cruel treatment of animals, be it of cattle, pigs or poultry. We are not not talking about the spectacular and occasional suffering caused in bullfighting rings, but a continuous, minute-by-minute suffering of countless animals forced to live and die in overcrowded and vile production facilities.

Perhaps, in the end, livestock farming offers enough material for a whole papal encyclical of its own.