Normally, the so-called "Pearl of the Adriatic" would be teeming with tourists right now. Instead, the Croatian coastal city is strangely — but also wonderfully — empty.

DUBROVNIK — The city seems to be crawling with them these days. They're everywhere, basking in the shade of stone houses, trotting around in the evenings on the white marble, making a ruckus at night.

For the past three months, cats have had Dubrovnik all to themselves. The "Pearl of the Adriatic," as it's known, is Croatia's top tourist destination. And yet, since the lockdown ended in May — and despite it being a country that the COVID-19 pandemic largely spared — hardly anyone has returned.

Normally, the charming medieval center would be swarming with tourists right now. Instead, Dubrovnik is experiencing a most unusual period, one that for older residents brings to mind the summer of 1992, after the city's siege by Yugoslav forces, when there was no water or tourists.

On the weekend of June 20-21, fewer than 2,500 visitors spent the night in Dubrovnik, an 89% decrease compared to the same period in 2019. There aren't any people debarking from cruise ships, which may or may be back in action toward the end of the summer. There aren't many flights operating here either, and the city has never been easy to access to by car.

What's more, people from the United Kingdom and United States — the top two sources of tourists in Dubrovnik — aren't even allowed to visit right now. On the other hand, some wealthy Russians and Ukrainians have taken advantage to moor their yachts in the marina and enjoy a moment of calm unlike anything the bay has experienced in the past 20 years.

"It's fantastic and strange at the same time, like a Giorgio de Chirico painting," says Karmen Gabrilo, a 28-year-old art historian and Dubrovnik resident who had learned to hate the summer season, which she equates with crowds, noise and a stench of fried food.

This year, though, things feel different, she explains. What she smells now is the sea, or the pleasant odor of a home-cooked stew wafting out through someone's window; she hears the clip of the Croatian language, and children's cries. Walking along Prijeko Street, she can also see a part of the cathedral that would normally be hidden behind the parasols of the many sidewalk cafes and restaurants.

"There are usually so many tables and restaurants blocking the way that I hardly dared walk around here, and when I did I'd have to watch where I stepped," she says.

That also means space for more bicycles. And on close inspection, we even noticed a patch of green in this famous city of stone: Grass had sprouted up through the marble paving.

Gabrilo, like just about every other young person here, worked last summer in a tourism-related job. But this year most hotels and restaurants are still closed because of the pandemic. She decided to take advantage and do a bit of traveling herself — to rediscover the greater region. She even invited some friends to join her, which is itself a novelty, because normally she cautions people not to visit during the period beginning in May.

"The worst thing that ever happened to Dubrovnik was when it stopped being a city and instead become a destination," she says.

For now, the city still has more locals (roughly 43,600, as of 2011) than available tourist beds (31,000), but with the former in decline and the latter going up every year, the two numbers are on track to even out. Eventually tourists could even outnumber real residents. That's especially true for the medieval city center, where the population of locals went from about 6,000 in 1965 to fewer than 1,600 at last count (in 2017).

In the 2000s, much of the old city was sold to investors, most of them foreigners. Locals sold their family homes for previously unimagined prices — up to 8,000 euros per square meter — using the money to buy spacious apartments for the whole family away from the coast.

"It wasn't the tourism that was aggressive; it was the privatization and the arrival of foreign capital," says Marina Missoni Barisic, a guide for 18 years who, like Karmen Gabrilo, has noticed how different the sights and sounds are this year. The nights are finally quiet again. She can hear the singing of the birds.

Barisic says that before the war, the Yugoslav regime kept tight controls on tourism. But since then it's been a free-for-all, and the entire economy has been transformed as a result. Farmers left the fields, factories shut down and everyone — heartened by tax incentives — put their stake in the tourism El Dorado.

Average income in the city and its surrounding is the second highest in Croatia after Zagreb, the capital. And yet, there is shortage of shops selling basic goods. Hospitals are understaffed. And housing is expensive — 30% higher than in Split, another stunning, seaside city about 200 kilometers up the coast. 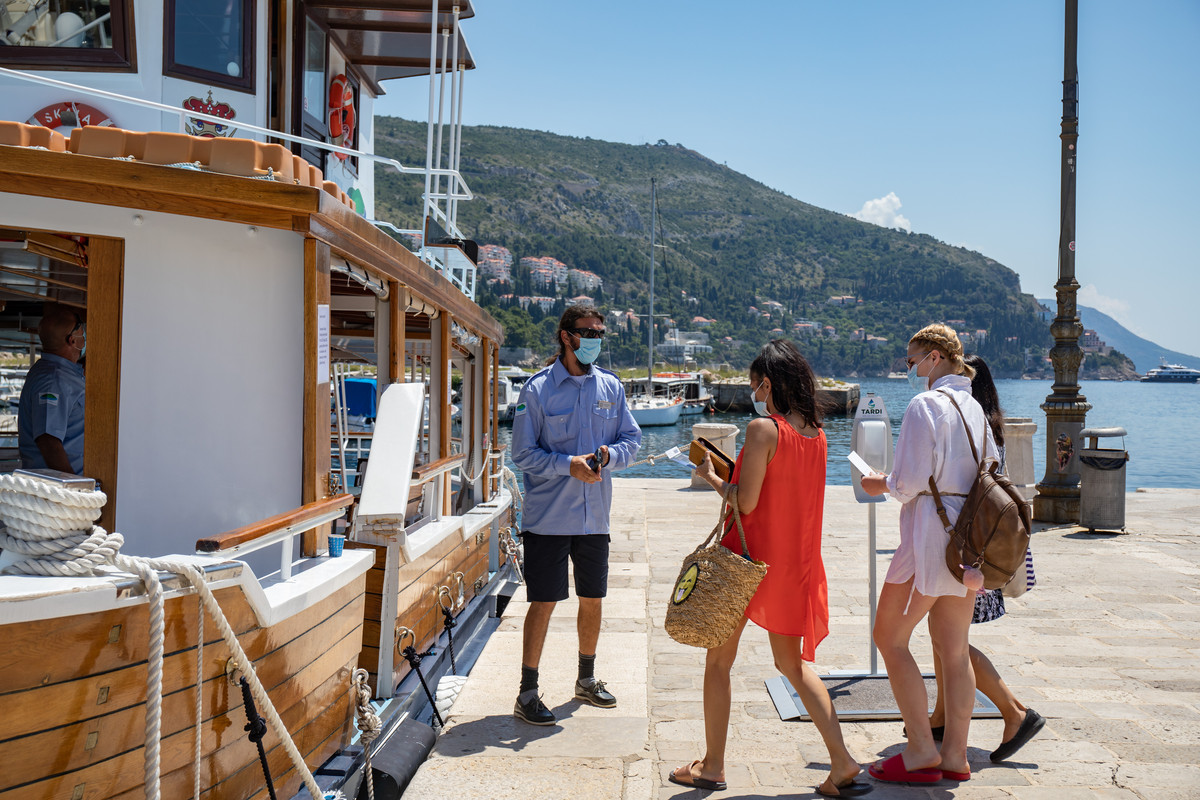 On top of that, it's only possible really to rent an apartment in Dubrovnik between October and March, because during the spring and summer months, owners prefer to put their properties on Airbnb. There are laws in place that are supposed to regulate the short-term rental market, but they're only loosely applied. The same goes for the use of sidewalk space by restaurants and cafes, and for city planning in general.

To get a sense of what's wrong with Dubrovnik, take a stroll down to the Porporela, the historic pier and breakwater that juts out into the harbor at the base of the old town. The old jetty offers a stunning view of the adjacent hills, which are now covered with rental apartments — at the expense of the receding treeline. The old forest now covers just half of the space, which UNESCO still classifies as a "buffer zone."

Tomi Soletic, a 31-year-old architect, opens a beer as he starts to discuss the construction taking place. "That one," he says, pointing to particular building in the distance. "I would have a hard time explaining how it can be legal."

Soletic cannot find words harsh enough to express his thoughts on Dubrovnik's urban management plan, which dates back to 2000 but is regularly amended to allow for this and that exception. The city's curator, Zana Baca – the person responsible for issuing building permits – has just left her position and is under investigation by the Ministry of Culture.

Here's another number that illustrates how much things have changed for Dubrovnik in recent years: Of the 233 weddings celebrated there in 2019, more than half involved foreign couples who came for the postcard view.

Nikolina Farcic, a caterer and party planner who especially works with British couples, earns a living because of it. But of course this year, things are much different. What's her take on the sudden disappearance of tourists? "I'm not sure that there's one good answer," she says.

Farcic is pleased on the one hand that there's space this summer for children to run around and play, for example, in front of the old clock tower. But she's also concerned about the future. "What will it look like?" she asks. "Like it or not, everyone here depends on tourism. With the [wedding] parties, I'm giving jobs to hairdressers, decorators, florists, lighting designers, make-up artists, DJs and so on." Indeed. A full 80% of all earnings in Dubrovnik are tourism related, the city government reports. 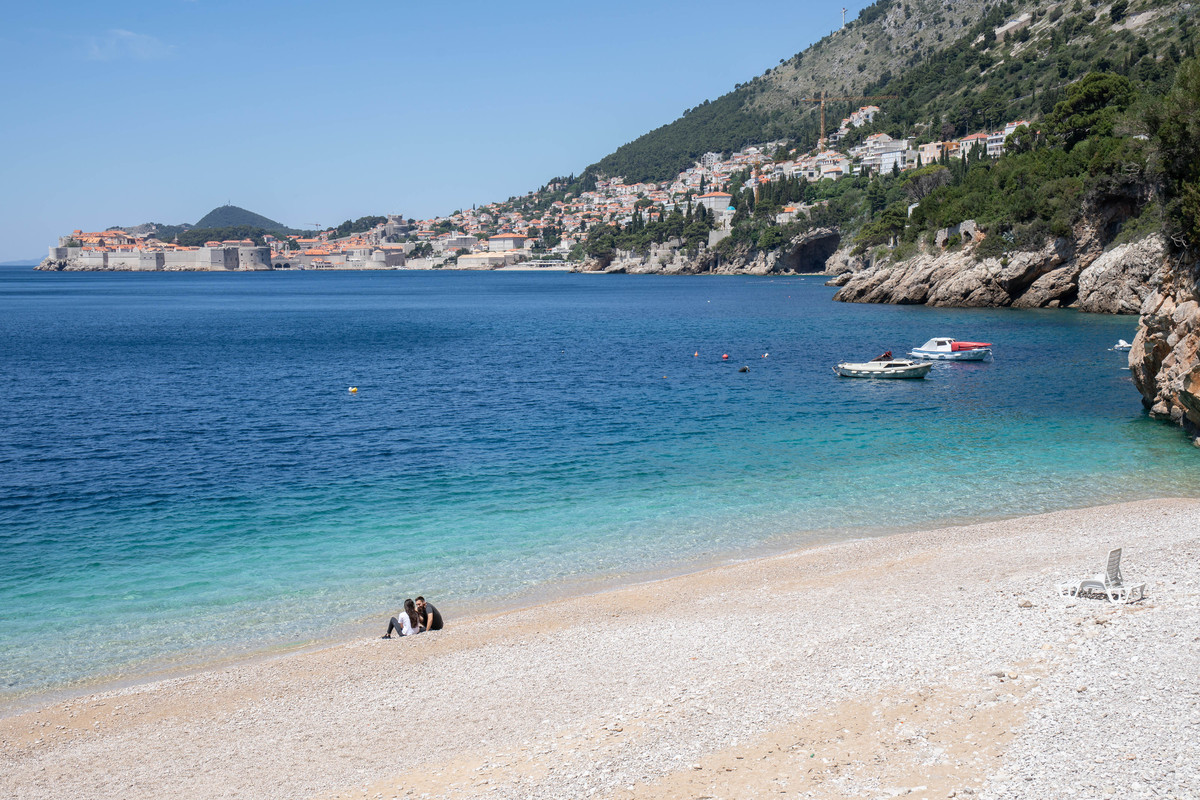 Sitting outside the majestic Gradska Kavana café, Farcic takes out her phone and pulls up a picture from Facebook. The image, taken six years, shows a monstrous jam of tourists bottle-necked at the famous Gate of Pile, one of three main entry points into the old city center. Such scenes are typical of Dubrovnik over the past decade, when low-cost airlines added to the stream of visitors already transported by cruises.

"Tourism has always been there," Farcic explains. "But, before the war in 1991, the people who came were loyal customers who returned every year to the same hotels and stayed for one week or two."

Then, starting around 2000, she adds, cruise ships starting docking in Dubrovnik. "We were thrilled," Farcic admits. "But when we started having difficulty entering the old city, when city buses were full and we couldn't park our own cars, that's when we realized how unbearable it had become."

Tourism is a golden goose that, nevertheless, needs protecting from over-tourism.

Nearly 1.5 million tourists spent at least one night in Dubrovnik in 2019, a 13% increase over the previous year. Add to that 750,000 cruise passengers, who stay for just half a day and don't tend to spend a lot, and it's no wonder that Dubrovnik ranks third worldwide (behind Cancun and Las Vegas) in terms of tourism intensity, calculated as a ratio between the number of full-time residents and the tourist accommodation capacity.

Still, some locals say they're used to the crowds and the festive atmosphere, and find that this year they're actually missing the normal summer hubbub.

"Seeing the city like this makes me sad," says Ivan Pijevic, a 20-year-old communications student. "Let me have one more month to enjoy things as they are now, but then I'd be happy if they all came back!"

For many residents, the ideal would be to find a happy medium: Tourism is a golden goose that, nevertheless, needs protecting from over-tourism. "The system is going to collapse," worries Robert Bender, a 40-something man who manages seven rental apartments in the old town. "It's not sustainable."

UNESCO, which works closely with the city government and is tasked with helping preserve the historic site, agrees. For that reason, the body had a plan in place for this year to spread out the arrival of groups and cruises. The plan was to never have more than two boats docked at the same time.

What UNESCO didn't anticipate, obviously, was that with the pandemic, no ships at all would dock. But Marina Missoni Barisic, for one, sees the crisis as a blessing in disguise: an opportunity for collective reflection.

Tomi Soletic is also making the best of the current situation. Soletic recently renovated a house on an island in the bay, and now — post-lockdown — is taking advantage of it himself. The water, he says, has never been so clean. And he's spotted different species of birds that have been missing since his childhood.

Overfishing: Italy And Croatia Reel In To Preserve Adriatic

Experts are pushing for expansion of the Fossa di Pomo project, which limits fishing to two days ...

Will Croatia's Quest For Energy Independence Cost It Krk?

A popular tourist destination in the Adriatic sea is bracing for the construction of a floating, ...