Airline operators and manufacturers are taking one on the nose and scrambling to contain the fallout from a crisis that appeared out of the blue.

CHÂTEAUROUX — Already there are nine of them lined up one after the other on the Châteauroux Airport's Tango 2 taxiway. A 10th — an A380 plane from British Airways — will join the the row of grounded giants at the end of the week. And by the end of May, they'll be joined by yet another.

In total, more than 50 airplanes could soon be sitting idly at this former NATO base in central France, some 250 kilometers south of Paris. Not since the Americans left in 1966 has the airport seen so many planes for storage or maintenance. But in the time of COVID-19, nothing is unimaginable.

"Airlines around the world have immobilized the vast majority of their fleet for months, making difficult decisions. Many of our clients are literally battling for their survival," explained Guillaume Faury, the head of Airbus, in an email he sent in April to 135,000 employees.

With traveling restrictions, confinement measures and border closures, over half of the revenue generated by airlines could disappear this year, according to the International Air Transport Association. As a short-term measure, the French government plans on giving 7 million euros of financial support to Air France-KLM.

But the industry downturn isn't expected to end anytime soon. The consulting firm Archery worries that it could take anywhere between three and five years to regain the same level of air traffic as in 2019, and that between now and 2024, demand for new planes will be down by between 40% and 60%.

Airline industry companies such as Thales, Airbus, Safran, Daher and Stelia are understandably concerned, and with each passing week, anxiety is only growing. "This crisis is going to be deeper and longer than what we thought a few weeks ago," says Philippe Petitcolin, CEO of Safran.

"This will force us to take structural measures and not just short-term precautions such as partial unemployment," he adds.

Another top executive anticipates successive failures in the sector. "It will be impossible to save everyone," says the source, who wishes to remain anonymous. A third industry insider warns that short-term responses can help the companies buy time but won't be enough to ensure their future.

In a letter to his employees, Daher's CEO, Didier Kayat, announced that the group's turnover was going to collapse by 400 million euros in 2020 compared to the planned budget, falling to 940 million euros.

In the United States, GE Aviation will be cutting 10% of its workforce. Boeing just dropped plans to buy Embraer, and investors are expecting the 787 Dreamliner's production rates to be lowered. Already hard-hit by the flight ban on the 737 Max, the Seattle-based giant might also reduce its workforce.

"We need a Marshall Plan for the aeronautic industry,"

For sanitary reasons, Airbus employees are currently divided into a blue team and a red team. One works from 7 a.m. to 1 p.m., and the other from 3 p.m. to 9 p.m., which allows for complete disinfection of their posts. The company has also put partial unemployment in place for its French sites after imposing two weeks of vacation.

"We're working to optimize our payroll in regards to the evolution of our activities. We froze all recruitment in March," the conglomeration's HR director, Thierry Baril, explains. "In France, thousands of temporary contracts are being terminated and a group of 3,000 employees was put to part-time factory work last week. A second wave of partial activity will be implemented in the coming weeks. It will be much larger and will affect all other areas of the company."

All these potential scenarios are giving the sector goosebumps. "What is more dramatic than when your last customers disappear?" exclaims Emmanuel Crespin, a union manager at Daher. 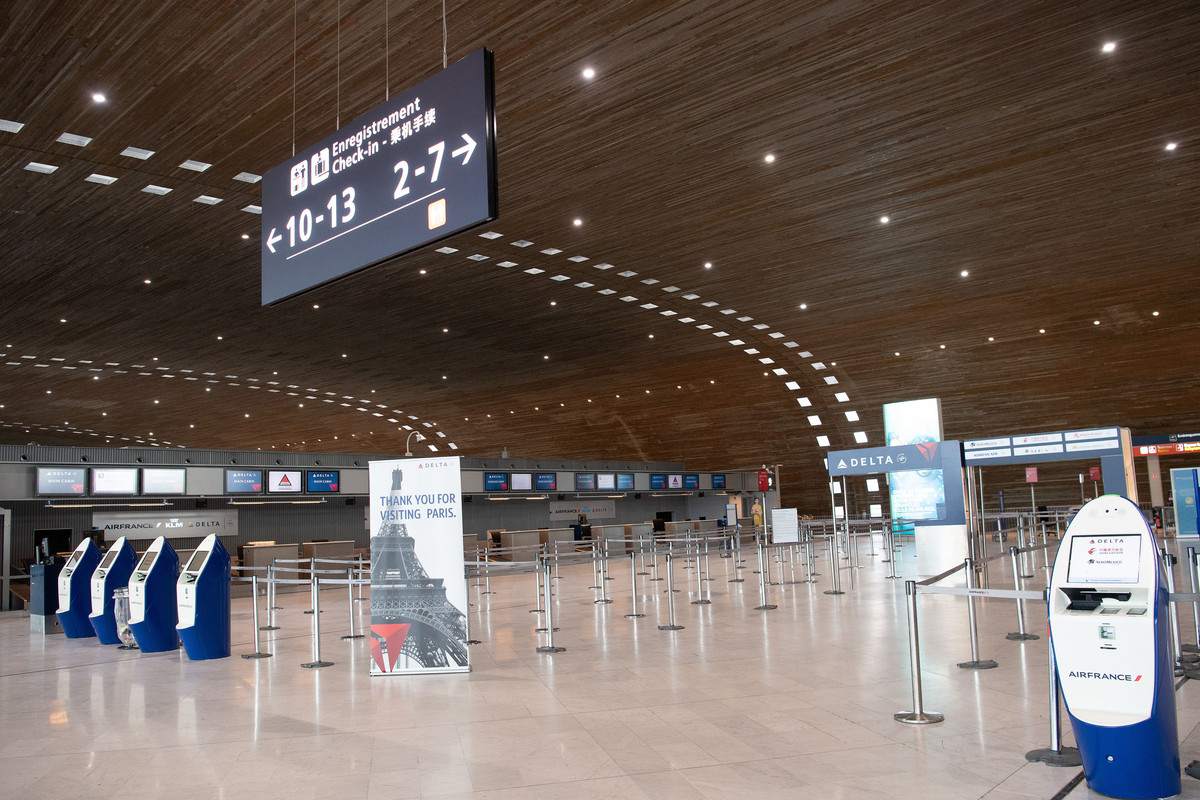 In Occitanie, France's southernmost region, the sector accounts for 40% of jobs. "We are facing the Detroit syndrome," warns Alain Di Crescenzo, president of the Occitanie Chamber of Commerce and Industry. "This crisis is of unprecedented violence, depth and duration. Our hypothesis is that, with production stoppages, we will be 50% less active in 2020. If we translate this decline in terms of jobs, this represents between 40,000 and 50,000 fewer jobs, mainly in subcontracting. And if you then take into account the indirect jobs, that means that 100,000 jobs are at risk in Occitanie."

These figures are considered exaggerated by some, relevant by others. "Between 2015 and 2020, we created 20,000 jobs in the region, gradually increasing from 40 to 60 A320s per month," explains Yann Barbaux, senior vice-president at Airbus and president of the Aerospace Valley competitiveness cluster. "These are the jobs that we risk losing."

The crisis could also have consequences on business models and revenue balance, forcing major readjustments. In the 1990s, Rolls-Royce relaunched itself by selling aircraft engines at near-cost prices and getting paid for the service.

This model was also adopted in the 2000s by Safran and General Electric. It enabled airlines to pay less cash all at once and engine manufacturers to regain control over maintenance while gaining visibility on their revenues. The model exists too for braking systems, landing systems, avionics and seat maintenance. The problem, though, is that when aircraft are no longer flying, it has a very significant impact on cash flow.

But the department most anxious about the economic impact is, without a doubt, research and development. Today, these programs are financed on a 50-50 ratio between the public and private sectors. Will companies still have the resources to keep up this model?

"We've received alerts that there will be problems finding the cash to finance our Horizon Europe program between 2021-2027," says Christophe Grudler, European deputy at Renea and a member of the industry commission. He and his colleagues are arguing now for a 70-30 ratio.

Military aeronautics are also constrained. "If the programs are frozen, there will be significant consequences for every sector," worries François-Xavier Bellamy, the European deputy of PPE. At the Thierry Breton agency, they feel the best way to help the entire industry is by saving airline companies first. "Then we'll have a bit of time to create a recovery plan for the aeronautic sector," he says.

"We need a Marshall Plan for the aeronautic industry," Philippe Petitcolin insists. "It must amount to at least 10 billion euros over five years and help all areas of the sector. It's vital to maintain our level of innovation and competitiveness in relation to our North American and Asian competitors. I don't see us depending on Europe for this, because it will not help the bigger industrial picture."

The ideal, rather, would be AIP-type funding. The CEO of Safran is also worried about possible buy-outs of French companies by countries like China, even if the French Ministry of Finance considers their decree on foreign investment to be an effective bulwark.

Far away from all these debates, the line-up of A380s at the Châteauroux Airport continues to surprise drivers passing by every day along highway A20. Given the health measures and passenger concerns, these grounded behemoths aren't likely to be airborne anytime soon. Twice a week, technicians from British Airways come to inspect them, running the engines regularly. But always in "idle" mode.