The Beauty And Brutality Of Occupied Hebron

Also known as al-Khalil — the friend — the historic, contested city is steeped in enmity and overshadowed by Israel's commanding military presence.

HEBRON — As an academic and D.C. Beltway analyst on issues about the Arab world, I've been closely following discussions about the accelerating Arab normalization with Israel. And what strikes me as being most absent from those deliberations is talk about what held back such normalization for decades: namely the Israeli military occupation of Gaza, East Jerusalem and the West Bank.

Earlier this year, I visited Hebron, a Palestinian city in the occupied West Bank that exemplifies a particular sharpness of the occupation more than anywhere else. In Hebron, at the very core of the ancient city, the military occupation divides the civilian population. There's an awesomeness to Hebron that cannot be compared to any other holy site. But there's a devastating desolation to behold as well.

After Israel moved toward normalization with the UAE and then Bahrain, Washington was awash with widely believed rumors among analysts and politicians that other Middle-Eastern countries would follow suit. Sudan, a country suffering tremendously under deeply debilitating American sanctions, decades of a dictatorship that its people managed to force out last year, and a humanitarian disaster owing to mass floods, was the latest country to signal a process of normalization, although that is still subject to a future Sudanese parliament. To put it bluntly, normalization with Israel is being used as leverage to get Sudan off the sanctions lists, at a time when Sudan desperately needs it to save its population from a crisis.

But it is also clear that the push to normalize Israel's position in the Arab world is far stronger than that to de-normalize the Israeli occupation of Arab territories, which is illegal under international law.

Two causes were prominent in my family upbringing: the South African anti-apartheid struggle, and the Palestinian cause. Both were deeply significant for me through my adolescence and into adulthood. And they both resonated for me on my visit to Hebron, although when I went there I tried hard not to have any expectations.

I've read about Hebron for more than two decades, and the very name has a certain resonance for me. But still, I tried hard not to think too much about it. Instead, I thought about how to get to Hebron — which is a mission in and of itself.

I went straight from the Old City of Jerusalem, which I had also visited, and arranged a taxi with a Palestinian Jerusalemite, who had one of those rare passes — for a Palestinian — that allowed him to drive anywhere in the Holy Land. He wasn't an Israeli citizen — he was from east Jerusalem — but with that particular pass, he was able to go to Haifa, Jerusalem, Bethlehem and Hebron.

The sublime sanctity of this place stands in stark contrast to the rank injustice of the quite literal apartheid that exists just outside its walls.

As I drove with him from the Old City, I remembered very clearly that he wasn't free in his land. His ability to travel depended on this pass, which was granted and could be withdrawn at any time by an occupying power, the Israeli state.

If the patchwork of different roads and Jewish-Israeli only settlements that we passed on our way to Hebron were a reminder of that occupation, there was something far starker ahead of us. Hebron is one of the most symbolic cities in the Palestinian occupied territories. With around 215,000 inhabitants, the old town of Hebron is a UNESCO World Heritage site because of one particular place — a place that is now completely wrought with subtle beauty and piercing pain.

Hebron is the English name for the city, derived from the Hebrew Khevron. Its inhabitants call it al-Khalil, which means "the friend," as does the Hebrew name. There's a reason for that: The old town of Hebron is where the Patriarch, Abraham, is said to be buried.

Abraham is cherished by Jews, Christians and Muslims, and indeed, in the West, we describe their religions as the Abrahamic faiths, noting their common claim of Abraham as a spiritual progenitor. For Muslims, Abraham is known as the prophet who built the Kaaba in Mecca and established the Hajj rituals that all Muslims are called upon to perform once in their lifetimes.

Abraham's privileged position is so highly regarded, that he is called Friend of God, as per the Quranic verse:

"Who can be better in religion than one who submits his whole self to God, does good, and follows the way of Abraham, the true in faith? For God did take Abraham for a friend."

And thus, the name al-Khalil is the name of the city itself, although that notion of friendship is now deeply troubled. On the one hand, it is there in the old town of Hebron and where Abraham is reported to rest. But on the other, friendship's precise opposite — enmity — is tremendously evident.

I think the first time I heard the name Hebron was because of a murder. In 1994, an American-Israeli religious extremist entered the enclosure of the Tomb of the Patriarchs and proceeded to massacre and injure 29 Palestinian Muslims at prayer. It was one of the most extreme singular examples of the Israeli occupation and the settler movement, and three decades later, it's still very much remembered in Palestine and around the world.

As soon as you enter the room of the tomb, the occupation slaps you in the face.

That was probably part of the emotion that I felt as I proceeded closer to the old town — remembering that awful event. I've never been able to disassociate Hebron from that massacre. And at the same time, Hebron is al-Khalil — the friend. It is where the Sanctuary of Abraham, al-Haram al-Ibrahimi, exists. That sanctuary is where, even before the Arab-Muslim conquest in the mid-7th century, residents believed that the biblical figures of Abraham, Isaac, Jacob, Sarah, Rebecca and Leah were all buried.

And such is it to this day. The Mamluks in the 14th century built a cenotaph for each of those figures in the enclosure; the Ottomans ensured that the tombs were covered in splendor; scores of believers have visited the sanctuary throughout history. The Prophet Abraham, perhaps like no other, resonates so tremendously across religious boundaries. I've long heard the term "Abrahamic faiths" in my work — but in Hebron, it's given a new meaning.

Alas, that meaning — in practice — isn't a gentle or kind one. The sanctuary is in the heart of the old city of Hebron, and it is in the area around the sanctuary where the most brutal and visible evidence of the Israeli occupation is brought to bear. As you get closer and closer to the sanctuary complex, the otherwise bustling city of Hebron becomes quieter and quieter. Shops that would have been busy in earlier years because of their proximity to the sanctuary appear to be scarcely surviving. And then you reach the entry point to the complex, and you're subjected to the security checkpoint of the Israelis. 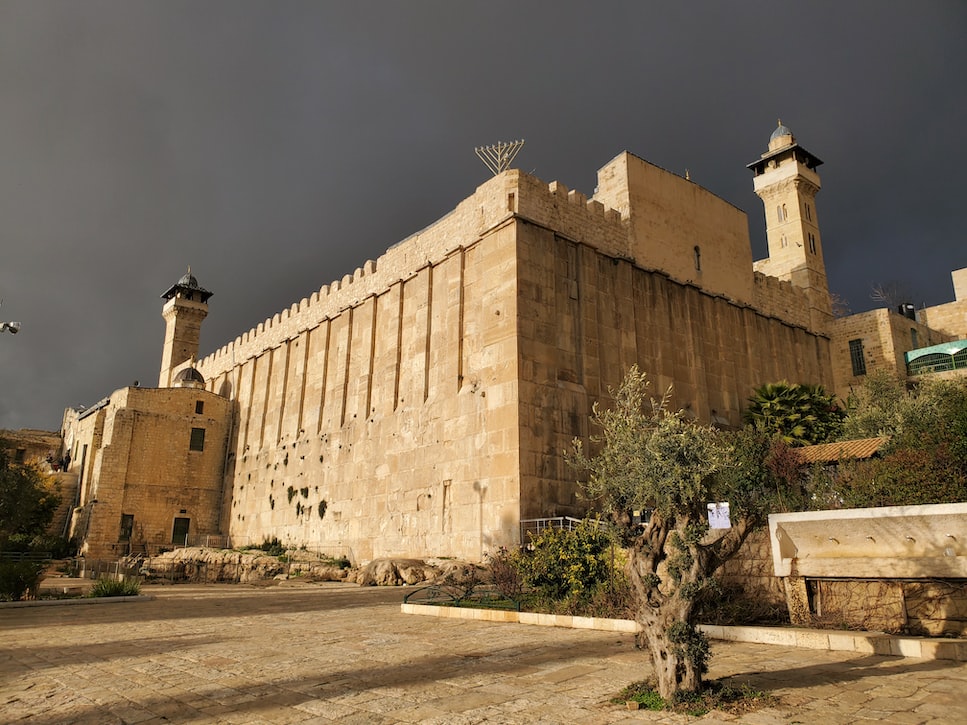 The Cave of the Patriarchs in Hebron — Photo: Dan Rosenstein

There's a heavily armed Israeli presence around the sanctuary. It's not there to protect the Palestinian population, of course, who make up some 99% of the population of Hebron. It's to protect the few hundred extremist Israeli settlers that have decided to live in the old city since the Israeli occupation began in 1967, who are renowned for being of the most ideologically strident of the settler movement — and most intolerant of the Palestinians that they live among.

It's that 'until' that casts a shadow over any experience of visiting al-Khalil. Because as one gets further and further into the mosque and the sanctuary, one realizes that one is approaching the source of what makes Hebron so special: the resting place of the Patriarch, of the Prophet Abraham. It's an experience that should be replete with wonder and awe alone. The Patriarch's resting place should evoke feelings of marvel and contemplation at the deep significance of the site.

But as soon as you enter the room of the tomb, the occupation slaps you in the face. The outer room of the tomb is cut in two — there's a security barrier, separating you from one side. And within the actual inner room, where the tomb is housed, there's another security barrier, where if you peer through the window, you can see Israeli settlers on the other side. The occupation here is raw, intense, ferocious.

At the same time, there's that unmistaken sense of a powerful presence, and the knowledge that for hundreds of years, people have visited that same spot to pay their respects to the Prophet Abraham. As a fellow analyst, and friend of mine who lived in Palestine for many years, put it: "The sublime sanctity of this place stands in stark contrast to the rank injustice of the quite literal apartheid that exists just outside its walls."

When one exits the mosque and tries to go to the other side of the sanctuary, the Israeli military is there — to stop Palestinians from entering a massive part of the old city. It's that part of the old city that the Israeli settler movement is so keen to populate and, as a result, several hundred extremist settlers hold the rest of the old city, and Hebron writ large, hostage. All under the gaze of the occupation.

I was told I could try to enter that area, as a non-Palestinian. I was tempted. But it seemed abysmal for me to even consider it, as it would mean leaving my Palestinian companion behind, a person who had far more right, in my opinion, and international law, than I to do so.

Instead, he took me on a brief tour of the rest of the old city. It was a complete ghost town. The shops of that area used to be busy with commerce, but because it is so difficult to enter with the security restrictions, there is no business to be made. No one wants to put themselves constantly at the mercy of Israeli security arrangements when they can go shopping elsewhere in the city, where the occupation is less directly intrusive. So they don't — and the businesses ended up shuttering their stores, and looking for opportunity elsewhere.

There are still Palestinians who persist in living in their ancestral homes in that area. They have to take difficult and torturous routes to get through just a tiny piece of the city, to reach their homes, owing to all the restrictions the occupation places upon them. In their city.

There's a wondrous sacredness in Hebron that is difficult to imagine witnessing anywhere else. But there is a tragic sadness to witness too.

It's particularly painful walking through that part of Hebron — but it's a clear microcosm of how the occupation functions and operates. From the perspective of the occupying military forces and their political leaders, the needs and requirements of the Palestinians are so minor compared to the desires of a tiny number of extremist settlers — and those desires will be protected by the barrels of guns. Their own, as well as the Israeli army's.

*Dr. H.A. Hellyer, a scholar of international affairs and religion in the West and the Arab world, is a senior associate fellow at the Royal United Services Institute in London and the Carnegie Endowment for International Peace, based in Washington D.C.

When it was first published in 2013, Tanya Habjouqa's groundbreaking series "Occupied Pleasures" ...

A Manifesto for Tali'at, a new movement seeking to put the feminist cause at the center of the ba...