Testing A Mother-Daughter Relationship At The Gaza Border

CAIRO — I dropped her off at the first of many stops that make up the long journey back to her home, and I went back to mine. We both like "homemaking;" we hoard the smallest of things, collect candles, eat what we grow – both of us are lovers of life, even fighters for it.

What we're not fond of are goodbyes, like this one. Her home, which is as small as mine, is not across the street, or in another neighborhood or even another town a two or three hours' drive away. Her home is over there, beyond that border, where all the injustice of the world is distilled. My mother's home is on the fifth floor of an apartment building on Lababidi Street in Gaza, Palestine.

A few hours earlier, I had been standing in the shower, contemplating the shampoo bottles lined up along the edge of the bathtub. Her suitcases were tightly packed with her old and newly bought belongings. Only her bottles of baby shampoo remained; she wasn't taking these. I liked that – it meant that in the coming days, every time I caught a whiff of shampoo, I would have an excuse to think of my mother.

She had arrived in Cairo one month and seven days earlier, following two full years of absence and a 40-hour journey. Forty hours spent on a bus progressing slowly through the desert and the multiple checkpoints, sleeping on the floor of the Egyptian terminal at the border, before finally crossing the canal and advancing towards the congested faraway city (separated more by time and hardship than by actual distance), where I, her daughter, reside. Two days ago, we had received the always arbitrary news that the crossing was open, and abruptly commenced the rituals of goodbye. And so the decision made by others decreed that International Women's Day would also be the day that my mother and I began to learn how to be apart again.

Palestinians who cross from Gaza into Egypt do not have the luxury of choosing when to make the journey, when to arrive, or when to leave – their plans are always tentative and suspended. In order to travel, they have to first get their names onto one of the long waiting lists, then wait and pray for the moment when the crossing is finally opened. Only then, if they are lucky enough to be on the list approved by Egyptian authorities, have fulfilled all the requirements and paid the often costly fees, does their arduous journey begin – with a prayer that it may be less arduous than anticipated, less harsh than the stories heard from the road, involving fewer hours standing around at checkpoints such Rissa in Arish and without losing any important papers or belongings in the recurring searches and chaos at those checkpoints.

The Palestinian traveler returns again to the state of waiting and praying.

Finally, many long hours later, the Palestinian traveler arrives in Cairo or to a plane that may take them away for work, medical treatment, or a long-deferred visit to loved ones. When they want to return, having fulfilled the purpose of the trip or because of commitments back home, the Palestinian traveler returns again to the state of waiting and praying for the crossing to open. When that finally happens, the unfortunate traveler, and their loved ones on both sides, proceed to the state of praying for a safe arrival in Gaza.

My train of thought was interrupted when she spoke to me from the other side of the shower curtain. I smiled, then answered one of her many, often unnecessary, questions. The details of a mother-daughter relationship are still alive between us, the traces of our shared life of old still occasionally detectable. However, none of that cancels out what we have lost in the years of distance since I left Gaza, particularly during the past two years, when a combination of long periods of border closure, road difficulties, a few missed opportunities and work commitments meant that we hadn't seen each other at all.

In distance, we are two independent women in two separate homes. The dynamics that are part of the history of the relationship recede. Each of us lives in her own world, dives into the details of her work, weaves her relationships, celebrates her successes, analyses her failures, constructs her ideas about the world and feminism and society, and takes care of her heart. In the evening, we check in with each other with a picture or short message. 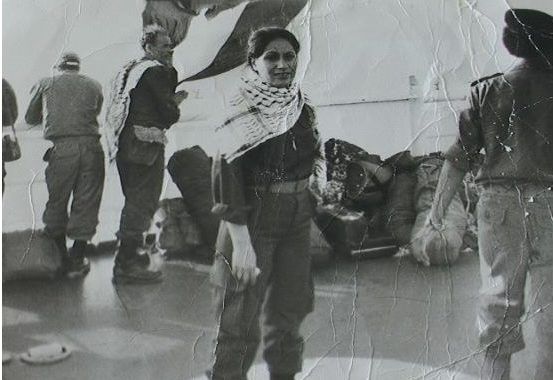 When we meet, which usually happens on short notice because of the crossing, the spaces of difference are exposed, giving rise to a certain awkwardness as we try to restore, temporarily and for an unspecified period, what we remember about sharing a living space and about the material aspects of being a mother and daughter. In quick clumsy movements, like in a game of musical chairs, we move in circles around the house and around each other, awaiting a signal that will allow one of us to sit down and relax.

If you be generous then, like a lover, come to me

Or deny me, then lament me beneath the jasmine tree

I've been humming this Sabah Fakhry song to myself since getting home, as I recalled the previous few hours. On the morning of her departure, my mother had let me pack her bags, in tacit acknowledgment of the skills I've acquired over years of moving between cities and homes. Then she sat on the sofa, finishing the final pages of a massive Waciny Laredj novel she had bought at the Cairo International Book Fair earlier in the month, while I sat beside her answering some emails. For the first time since she'd got here, I talked to her about my intention to do more writing. We went over the plan of the day to make sure we were not forgetting anything. Then we ordered grilled fish and, as we waited, listened to Sabah Fakhry sing. We laughed at the clip of him dancing in the middle of the song, as we had done since my childhood, and then we started dancing along. We danced together for the first time in a long time. It felt like a controlled celebration of each other: So, our ability to dance together had not been affected by distance. Dancing still brought us together.

My mother was older, and so was I.

The month we shared wasn't easy. Every time we part, the distance between us multiplies, and we age separately. This time was particularly difficult. We hadn't seen each other in two years – my mother was older, and so was I. Take two strong, independent women, one in her 60s and the other in her 30s, put them in one room with hardly any notice and for an unspecified duration, and see how that works out.

At first, we went through a phase of daily arguments. Sometimes I just don't get my mother. What is she saying? What is she doing? Who is that 60-year-old woman in my kitchen? In my bedroom? In front of my mirror? And since when does she like jam so much? Without a doubt, she found me strange too, even if she didn't openly express it. When, for instance, did I develop this hatred for neon lights? And why don't I like jam? I oscillated between feeling annoyed by the sudden lack of personal space and feeling energized by the love and warmth. I was continuously and simultaneously awed, bemused and exasperated by the similarities between us.

Our meeting after a long separation is a process of partial reclamation, inevitably punctuated by some mourning for what was lost. While apart, we are not really aware of the loss – phone calls, photographs and text messages don't reveal the cracks in our bond. We are fooled by virtual communication, but only until a real encounter lays us bare, exposing everything that we have tried, consciously or unconsciously, to hide from one other.

The first few days with my mother usually go by in something akin to the stages of bereavement – an interchange of denial, anger, sudden elation, sadness, and confusion. But with time, and luck, we regain some calm and arrive slowly at acceptance: accepting loss, age and difference, accepting new ways of living, accepting the transparency that comes with closeness and the fragility that accompanies it, and finally, accepting once again the mother-daughter relationship. Our conversations start to flow, cohabitation becomes less stressful, cooking together more enjoyable. Little by little, each begins to redraw her own space and to comprehend the other's. We begin a process of rediscovery.

But our time comes to an end before we reach the point of normality. The Egyptian authorities always seem to announce the opening of the Rafah crossing just one moment before we get used to our new – or reclaimed – togetherness. The stages of mourning, of celebration, of growing familiarity, all come to an end. The past evaporates, concerns about the future disappear; we just have one day left. Two women, friends, mother and daughter, seizing the last few hours to love, dance, enjoy food, music, and conversation, and to pack.

Yesterday, at dawn, my mother crossed the dangerous desert once more to return to her home in Gaza. She will dive again into her daily routine, and the work that she will remain attached to until her last breath, for she is simply incapable of being unproductive. Back at my Cairo home, I too dive back into the details of my work and my everyday life – friendships, traffic, dreams of travel, the rising cost of living. Years ago, when she chose to stay and I chose to leave, we thought that we were a mere road trip away. We thought that Gaza and Cairo were two fairly close points on an unbroken line between us. We didn't know what lay ahead: multiplied distances, political complications, long queues, complex planning and risky roads.

Today is March 8. I'm thinking that the crossing was opened in time for my mother to wake up in her own home on International Women's Day and to participate in the celebrations and activities as she does every year. After an entire month off work, I can imagine her voice — the voice I grew up with – in seminars, meetings, debates and campaigns, soaring to defend women's rights.

As for me, I woke up alone, without her voice. I prepared my favorite breakfast, changed the bed sheets and sat down to write these words, wavering between the weight of silence and aloneness, the freedom of having my personal space back and the long wait ahead until the next meeting, with all the longing, love, loss, confrontation, grief and rediscovery that the wait will bring.

March 8, 2018 – In the year that has passed since this article was first published here in Arabic, Farah and her mother have not managed to meet again.

*Translated into English by Nariman Youssef

The Beauty And Brutality Of Occupied Hebron

Also known as al-Khalil — the friend — the historic, contested city is steeped in enmity ...

When it was first published in 2013, Tanya Habjouqa's groundbreaking series "Occupied Pleasures" ...