Arab-Israeli Rapprochement: Is Saudi Arabia Next?

The accord to normalize relations between two Arab countries and Israel is a major diplomatic victory for U.S. President Donald Trump, who has made good on a pledge to bring a breakthrough to Middle East negotiations just before his bid for reelection in November.

Still, the fast-moving events of the last month — culminating with Tuesday's signing ceremony at the White House of what's being called the "Abraham Accords" — are above all a sign that real change may be on the way to the region. Israeli Prime Minister Benjamin Netanyahu noted that it took Israel 26 years between the second peace agreement with an Arab country (Jordan) and the third last month with the United Arab Emirates, but only 29 days to seal its fourth, with Bahrain last Friday. In a video posted to his Twitter profile, Netanyahu promised "there will be more" Arab countries that follow this path.

Whether that "more" will include Saudi Arabia, Washington's most important Arab ally and economic partner in the region, is the next big question. Despite promising not to normalize relations with Israel until a peace deal is agreed between Palestinians and Israelis, it is in the Kingdom's interest to see that Israel is normalizing relations with other Gulf states.

What's bringing former foes together, of course, is a common enemy: Iran. Riyadh and Tehran have been in a longstanding battle for regional dominance, including numerous proxy wars in the region: Syria, Yemen, Iraq and even Lebanon. The two countries represent the two main denominations of Islam : Sunnis (Saudi Arabia) and Shias (Iran). Even though they share the fundamental beliefs and practices of Islam, the divide, which is 14 centuries old, originated over the question of who would succeed the Prophet Muhammad as leader of the Islamic faith.

What's bringing former foes together is a common enemy: Iran.

But what is shaking up the region today is not only religion, but questions of global influence. Zvi Bar'el, a columnist for Israeli daily Haaretz, noted that last Friday's deal announced with Bahrain has an important military component. "Bahrain is an important part of the Persian Gulf's strategic defense against Iranian influence," he writes. "It hosts a U.S. Navy base with around 6,000 service members, and could serve as a launch pad for attacks on land and sea threats from Iran."

The first deal with UAE announced in August was particularly notable for the Emirates influence (and independence) in the Gulf region. But Bahrain's overture may have even more long-run significance for what comes next. "Bahrain's king, who is entirely dependent on Saudi Arabia — to which it is linked via a 25-kilometer causeway — received a Saudi "license" to move forward with normalization" writes Bar'el. "Crown Prince Mohammed is demonstrating for Trump his power to build the Arab mantle for the president's Middle East peace plan." 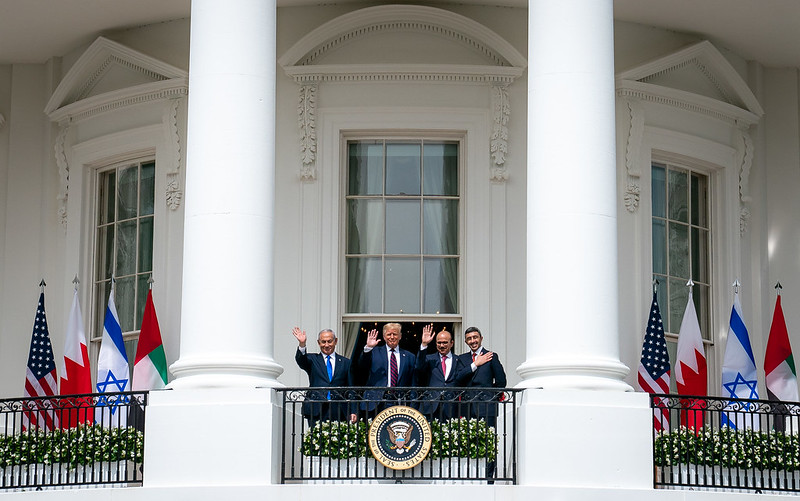 Another sign that Saudia Arabia may be preparing the terrain for its own deal with Israel was visible last spring — on television sets. Two drama series broadcast during Ramadan in Saudi Arabia, which featured Israeli characters, appeared to be a prime example of the Kingdom using "soft power" to get its population ready for a new era in the region where Israel is now regarded as a partner. In Exit 7, one of the actors asserts that the Palestinians are the real "enemies'' who insult the kingdom "day and night", despite decades of financial aid, while featuring a friendship between a Saudi and an Israeli through an online video game. The second series, Oum Haroun, follows the life of a Jewish community in a Kuwaiti village in the 1940s. Both formats were produced by the MBC Group, under the control of the Saudi government, and scored high ratings during Ramadan, even as they were lambasted by some on social media.

As for the Palestinian National Authority, which remains an unrecognized state by the international community, the smiles and signatures on the White House lawn are largely seen as bad news. Ahmad Majdalani, Minister of Social Affairs of the Palestinian Authority, called it a "stab in the back," a metaphor that has circulated in the region ever since another peace deal, between Egypt and Israel in 1979.

Now all eyes will be on whether Saudi Arabia keeps its promise to normalize relations in Israel only if there's a peace deal with the Palestinians. If the Saudis decide not to wait, it could be the mother of all back-stabbings.

The Silicon Wadi, as Israel's tech sector is known, has a penchant for creating innovative new co...