Kastellorizo is just a mile off Turkey's coast - Mark Gregory

The easternmost island of the Dodecanese archipelago is just a stone's throw from the coast of Turkey, where the president's neo-Ottoman rhetoric is cause for concern.

KASTELLORIZO — There is no indication that the horseman Giorgis, who struck down the famous dragon in Lydda with a single blow of his sword or spear, ever stopped in Kastellorizo during his adventurous life. And yet, the name of the man who became Saint George for the Christians is found everywhere in Kastellorizo — or Megisti, as the Greek island is known to locals.

The monastery bears his name, as do churches and even some boats. Evoking the name of the patron saint of knights, it would seem, is a kind of plea for protection. These days, there are no dragons, of course, trying to harm the easternmost island in the the Dodecanese archipelago. But the inhabitants of Kastellorizo do live in the shadow of another threat, one that goes by the name of Recep Tayyip Erdogan.

The Turkish president suddenly rekindled tensions with Greece this summer by ordering his ships to conduct a gas exploration campaign in the eastern Mediterranean. Fighter planes crisscrossed the skies. And in the nationalist and expansionist speeches that he is so fond of, Erdogan doesn't hide that for him, it's only logical that an island lying far from the Greek mainland and so close to Turkey (Kastellorizo is just 2 km off the coast) would one day return to the Turkish bosom.

The island is a long disputed territory, and was controlled at various times by the Ottoman Empire. And as part of his feisty discourse, Erdogan has warned Greece that it will face "bitter experiences" and "ruin" if the two countries can't resolve their maritime sovereignty issues. Even the name of the territory is dispute: Kastellorizo was inherited from the Crusades and remained in use until 1957, when Athens decided it should regain its ancient Greek name of Megisti.

And yet, in taverns around the port of Kastellorizo, people smile when the topic of Erdogan comes up. The Kastellorizians have assumed for decades that armed conflicts are a thing of the past, and don't think Erdogan, for all his neo-Ottoman bluster, will really change that. There's nothing to worry about, or so they say. Besides, they know Turkey, as embodied by the town of Kas, which is clearly visible from Kastellorizo. In ordinary times, islanders go for a daily walk there to the bazaar.

"We have been living for a long time in a cycle of tensions between Ankara and Athens, but here, the relations between the Greek and Turkish populations are excellent," says Stratos Amygdalos, deputy mayor and spokesman of Kastellorizo, while sipping an iced coffee on the terrace of his bistro, Stratos. "With Kas, we are like twin cities. We are friends."

It must be said that the inhabitants of both shores have everything to live peacefully. Kas, located in the province of Antalya on the Turquoise coast, has become a popular place for both scuba diving and cultural activities. It attracts Turkish artists and bohemians. And Kastellorizo, for its part, is a veritable paradise island. It's a bridge between two worlds, as evidenced by a fort of the Knights of the Order of Saint John of Jerusalem, Orthodox churches, an Ottoman mosque and colorful houses of various inspirations. Its charm attracts travelers from all over the world, including princes and billionaires who anchor their yachts offshore. After being engulfed by centuries of war, it has become very prosperous.

The island is a bridge between two worlds.

Since the the days of ancient Greece, the island has seen its share of invasions and destruction. It was part of the Roman Empire and later the Byzantine Empire. In that period it was attacked six times by the Arabs and deserted the first time, with the survivors taking refuge in Anatolia. Later the Turkish Seljuks conquered the island and gave it the same of Meis.

Afterwards it was taken by the Crusaders, then the Mamluk Sultanate of Egypt, the Catalans, the Kingdom of Naples, the Ottomans, the Republic of Venice and again by the Ottomans. The Ottoman period was very prosperous for Meis, as the Sultans of the Sublime Porte allowed the island's sailors to trade freely in the Mediterranean.

Self-administered during the Greek War of Independence in 1821, it was still occupied by the last Ottomans, then by France, Italy and finally the United Kingdom. Those who survived World War II were taken to Palestine by the British and then emigrated to Australia. The population of Kastellorizo had shrunk from 14,000 at the beginning of the 20th century to 250 by the time the war ended and the island officially joined Greece in 1948. The population is now officially 500, including officials sent by Athens and Albanian immigrants who arrived 20 years ago. The number of inhabitants whose ancestors are Kastellorizo is comparable to that of 1948, or about 40 families.

Suffice it to say that this Mediterranean jewel, which has suffered tragedy after tragedy and rebuilt itself on the memory of these sufferings and exiles, does not appreciate war threats or the patrols of warships and fighter planes.

As loggerhead sea turtles come to the edge of the dock to see if a cook has thrown fish heads into the sea, the Kastelloriziens on the terraces of the Lazarakis or Alexandra restaurants exaggerate their lack of concern. You have to push the conversation — accompanied by rounds of ouzo — to get them to admit a slight worry. 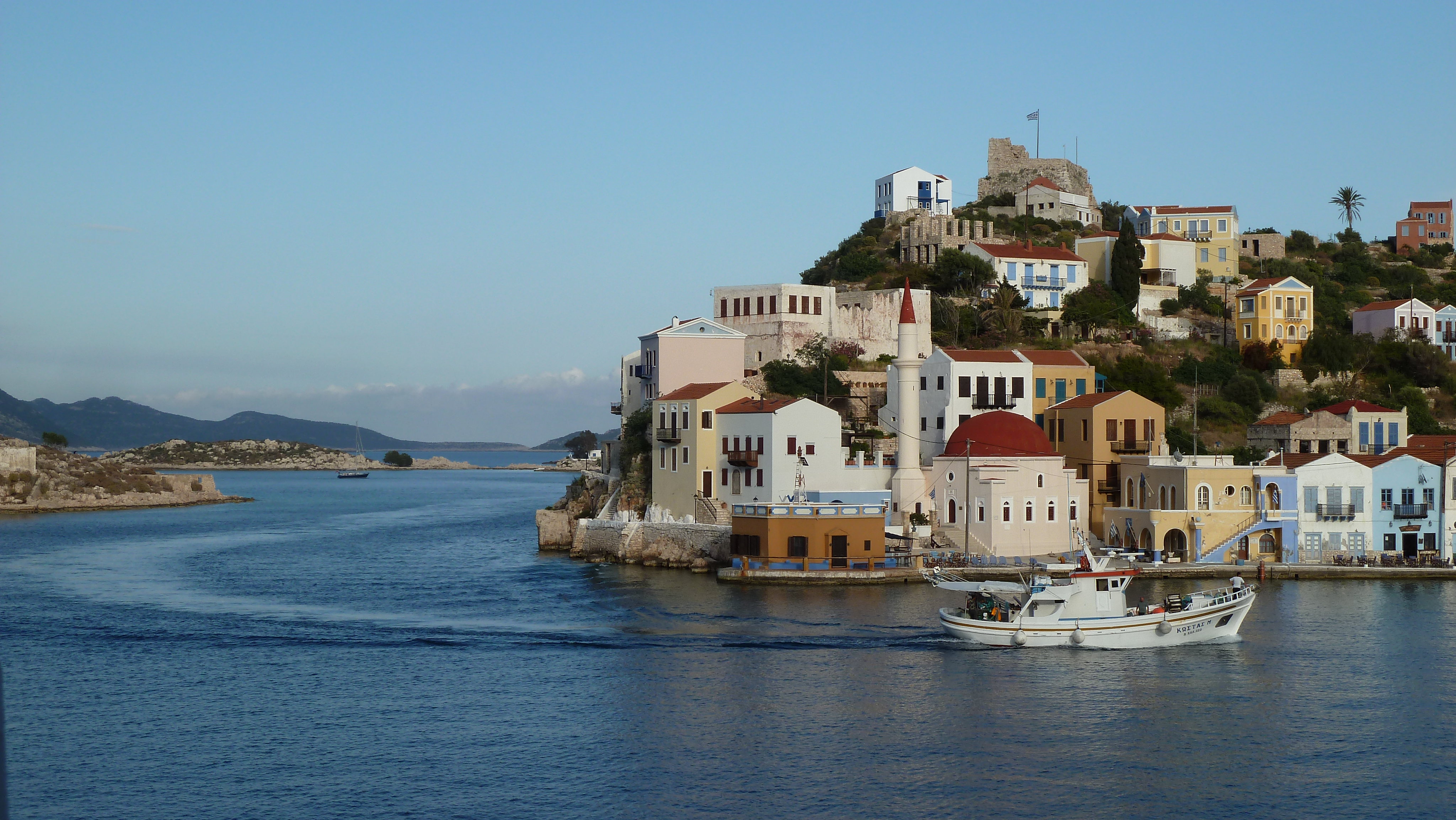 The island has become a popular place for both scuba diving and cultural activities — Photo: Kostas Limitsios

"It's true that political tensions are reaching an unusual level," deputy mayor Stratos Amygdalos admits. "This summer, some people were afraid that a war might break out."

Even before the Turkish ships came to punctually tease the waters around Kastellorizo, an unusually long display of fighter planes from both countries caused panic on July 21. After a pilot broke the sound barrier over the island, tourists fled on the first outbound ferry.

"Erdogan is unpredictable, and his speeches are still very harsh," says Amygdalos. "For us who live in perfect harmony with the Turks on the coast, it makes us sick to hear him threaten to sink Greek ships."

Georgios Karagiannis, a ship captain with a boat named Barbara (after his mother) and another, of course, called Saint George, dismisses "Erdogan's old tunes" as just more of the same. "We know that even if there were a diplomatic agreement on gas exploration, he would do it again next year for some reason. That's the way he is," he says.

But Father Christos Symeonidis, a newcomer to the island who was sent recently to take over from the aged priest who'd run the Orthodox Church here for decades, worries about the possibility of a military mishap. He emphasizes, however, that he tries to stay calm, and says that when it comes to relations with everyday Turks, there's nothing to fear. "They know each other," he says. "They appreciate each other, and life goes on..."

The long ferry to Rhodes

Kastellorizo's biggest concern, right now, isn't the "sonic boom" that cracked the sky in July — and sent tourists scrambling onto boats — but the lack of visitors due to the COVID-19 pandemic.

Border closures mean that Turkish visitors from Kas, who had two daily shuttles to the island, have been absent since March. Also, to buy what they need, the islanders — whose only industry is fishing — must now go by ferry all the way to Rhodes, which is much further away. Missing too are the "Kassies," as the Kastellorizian diaspora from Australia has nicknamed itself, who traditionally spend their summers in their ancestral village. This year they're confined to the Pacific. In Kastellorizo, seasonal revenues are down by approximately 70%.

Marie Rivalant is one of five French residents on the island, and the only one working there. Rivalant arrived as a student 30 years ago and then spent every summer there with her French family. She has now lived in Kastellorizo for 20 years and is married to Georgios Lazarakis, the son of a smuggler — like almost all islanders — and owner of an historic tavern bearing his name.

An architect who builds and renovates houses, she also runs the charming guest house Mediterraneo, named after the Oscar-winning Italian film by Gabriele Salvatores. The movie has greatly contributed to popularizing the island's sublime landscapes and attracting tourists for the past 20 years.

In Kastellorizo, seasonal revenues are down by approximately 70%.

Rivalant says she wouldn't leave this "balcony on the Orient" for anything in the world. She loves both shores so much that she also bought a house near Kas and an apartment in Istanbul. She finds the political situation "disturbing," even if, as a good Kastellorizienne living from tourism, she minimizes the crisis and sneers at the aerial displays. She says that she was swimming quietly when she saw, in amazement, the panic that gripped tourists this summer.

Rivalant says that "islanders are much less anti-Turkish than visitors from Athens." What offends her, she adds, is that the Greek warship Upopliarxos Mykonos, when not out patrolling at sea, is anchored in the port of Kastellorizo. Its powerful generator breaks the precious silence day and night. "It could be anchored elsewhere around the island," she says.

But while for so many travelers Kastellorizo is a haven of peace, it's also a garrison island. In addition to a patrol plane and Greek navy boats moored in the port, a few hundred soldiers live in Kastellorizo.

Stationed at the top of the cliffs and on the surrounding islets, they watch out for Turkish maritime movements. In the afternoon at the Faros café, where the beautiful come to bathe, and in the evening at the port terraces, soldiers not on guard have their eyes elsewhere — on the local island girls, to whom they wink and offer beers.

Such is life on this idyllic, arid rock surrounded by a turquoise sea but that is also at the heart of the geopolitical conflict between Greece and Turkey. The Kastellorizians pray for a diplomatic agreement as much as for the end of the coronavirus epidemic.

From a café emerges the sound of David Gilmour's guitar. The waitress is playing the album that the former Pink Floyd guitarist composed after falling under Kastellorizo's spell. After Castellorizon, the instrumental opener, comes the poetic title song: On an Island. "Sharing a dream, on an island, it felt right," Gilmour sings.

In the meantime the sun sets. A woman laughs. Her companion orders an ouzo. The threat of war seems so distant.

Testimony from Afghan and Somali migrants, as well as locals on Greek island of Lesbos, where Eur...

Greece And The Dark Forces Of Modern Mobility

The word krisis was coined by the Greeks three millennia ago, meaning "turning point in a ...