WUHAN — Cheng isn't really into hip-hop, but when a friend suggests they go see the Bad Guys in concert, she didn't hesitate. "We were so bored during lockdown," the 20-year-old woman, her hair dyed electric blue and her ears adorned with piercings, explains.

Next to her are dozens of young people wearing massive sneakers and oversize hoodies, quietly flocking in front of the stage of the Vox, an independent concert hall in Wuhan. Eight months after the central Chinese city of 11 million inhabitants was sealed off, its young people are craving some party-time.

Entering the Vox only requires a quick temperature check. Inside, masks are optional and social distancing non-existent. For Xiao Xian, the club manager, the only undesirables are smokers. Nevertheless, the COVID-19 epidemic continues to cast a shadow. "We reopened in May but we still can only operate at 50% capacity," Xiao Xian explains.

For 76 days between late January and early April, this sprawling metropolis in Hubei province was cut off from the world. Now, though, life is slowly going back to normal. Visitors can even come from Beijing by train now without having to present a green health QR Code, the precious "open sesame" number people still need to pass through the doors of many Chinese cities.

"Wuhan is the safest city in the world," says Mr. Yi, all smiles and no mask, as soon as a group of foreign travelers climb onboard his white and yellow Citroën taxi. He goes on to explain that the entire population was tested in the spring. Then, to make sure they understand, the cabbie stammers a few words in English."

Beijing is turning Wuhan into a symbol of the "Chinese victory".

My country: good!" he proudly says as his taxi speeds over the Yangtze River.

In Paris, Berlin or New York, face masks continue to be mandatory. But that's no longer the case in Wuhan, or in the rest of China for that matter. In the Old Concession District of Hankow, people are lining up to grab breakfast from the many food trucks. Traffic jams are back in the main streets of what was merely a ghost town last winter. At at rush hour, the metro bursts with commuting workers. And on Snake Hill, tourists pose again in front of Yellow Crane Tower, one of city's most emblematic monuments.

In the middle of a war against a virus that is still raging in the rest of the world, Beijing is turning Wuhan into a symbol of the "Chinese victory" over an illness authorities recently dubbed the "devil." The statement came at a lavish ceremony at the People's Palace, held on Sept. 8 to celebrate the anonymous "heroes" of this "people's war" against COVID-19.

All of the emphasis that's being placed right now on the rebirth of Wuhan is part of an extensive propaganda campaign that's designed, it appears, to neutralize international criticism over China's initial handling of the epidemic. State-owned media hailed the reopening of schools earlier this month, along with a massive techno party that several thousand people attended last month, as further evidence of Wuhan's "victory" over the epidemic. 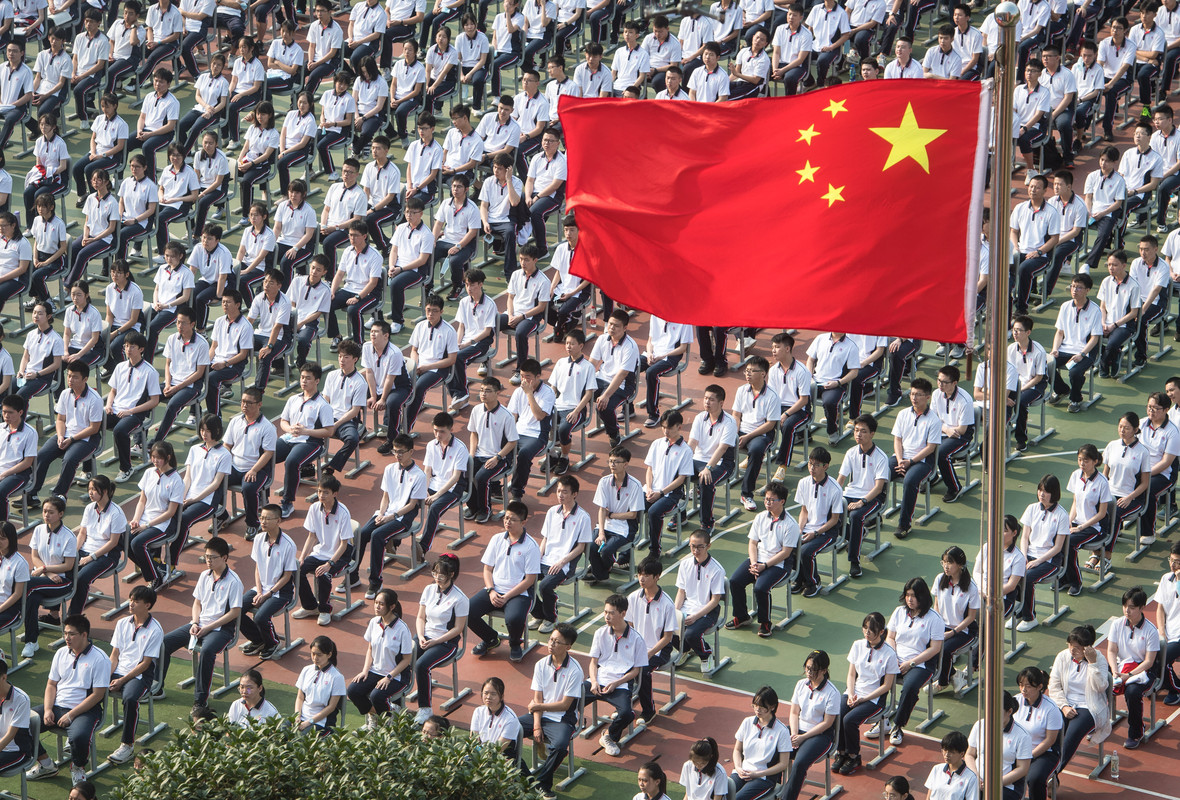 And yet, for some residents of Wuhan, which accounts for approximately 80% of the 4,634 coronavirus deaths officially recorded in China, these celebrations are hard to swallow. "The authorities turn us into heroes so people forget that what we really are is victims," one young artist, who prefers to remain anonymous, explains.

Thanks to a small camera and her voluntary caregiver status, which granted her access to most facilities, the woman kept a record of the tragedy. "When I went to the funeral home right after the lockdown lifted and saw this woman holding her father's ashes in her arms while trying to control her grief, I couldn't help but burst into tears," she recalls.

A nurse adds her own insights into the crisis. She says that despite the construction of field hospitals, there were still a lot of people queuing for treatment. "It felt like the whole town was sick," she says. And even though she's now regaining her footing, one step at a time, the nurse confides that she feels haunted still, especially at night, by her memories of the dead.

There's a reason people are cautious about protecting their identities. Chinese authorities are determined to control the COVID-19 narrative, and they muzzle victims' families who hold them accountable.

Still, Zhang Hai, who lost his father to COVID-19, refuses to back down. Speaking over the phone from Shenzhen, he says that if authorities "hadn't hidden the truth and reacted so late, the situation would never have been so catastrophic."

Zhang Hai is convinced that his father caught the virus when he went to a hospital in Wuhan in mid-January. But the Wuhan Intermediate Court rejected his complaint, as it did with those filed by other families as well. Determined not to be intimidated, he submitted a new complaint with the higher court.

"My father, like the other victims, deserves official apologies," Zhang Hai says. "The authorities must be held accountable for their bad management of the crisis."

For some, the lies and the delayed reaction at the beginning of the epidemic are hard to forget. The death of the young whistleblower Li Wenliang — noticeably missing from the ceremony in heroes tribute held in Beijing — had a particularly big impact.

Still, many Wuhanese prefer to move forward and salute the government for having successfully controlled the epidemic. "We were not satisfied with what the local authorities did at the beginning, but as soon as the central government took over, it quickly improved," a young woman says, echoing the official speech.

Chinese authorities are determined to control the COVID-19 narrative.

Seated in front of a plate of spicy chicken feet, her friend agrees: "The people of Wuhan and the government have done a good job. Look at the situation abroad, it's frightening."

Indeed, while the rest of the world lives in fear of a second wave, China's success against the illness has granted even more legitimacy to the Communist Party and to President Xi Jinping's authority.

Since the lockdown lifted, Wuhan has taken the time to work on its trauma. The Museum of the Revolution put together an exhibition on the epidemic, complete with symbolic items such as coveralls. In a pavilion not far from the Yellow Crane Tower, drawings are on display.

"Wuhan deserves to be called a city of heroes," says one visitor. "In a short time and thanks to everyone's efforts, we kept the virus from spreading in this great city. Lockdown was the price to pay and now things are back to normal."

But to get the real, full picture of Wuhan's return to normalcy, it's important to look beyond the propaganda. Economically speaking, the city is still recovering from a 40% drop in its GDP in the first quarter. Many don't hold back their concern regarding a bumpy recovery.

"On a rainy day like today, I wouldn't normally have to drive around looking for clients," a taxi driver explains. "But people don't go out as much as before, and they have less money."

In the night market on Jiqing Street, seafood restaurants lament the absence of tourists. "Last year, customers were queuing outside every night waiting for a table," says one restaurant owner. "But today we were again only half full." 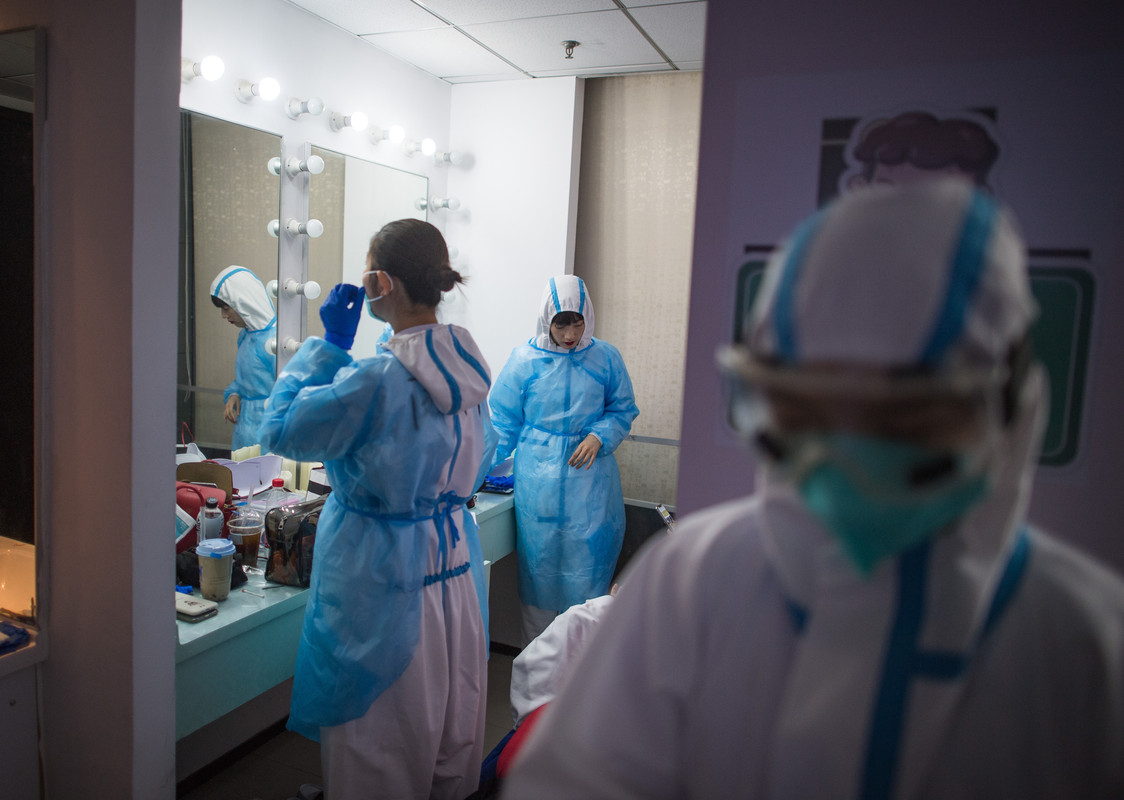 Actors from the People's Art Theatre of Wuhan changing costumes during a drama — Photo: Xiao Yijiu/Xinhua/ZUMA

Among the first people infected in Wuhan, many worked at the Huanan fresh market, closed by authorities in January. Since then, it has been abandoned behind tall blue partitions, to the dismay of the surrounding businesses. "No one comes here anymore," says a cigarette seller. "The market must be reopened."

Authorities are working towards restoring Wuhan's image as well as reviving the economy. In an attempt to lure visitors come back, entrance to more than 400 tourist sites across Hubei province is free until the end of the year. A relief fund of 100 billion Yuan ($14 billion) has been set up for low-interest loans to struggling small- and medium-sized businesses. And new infrastructure projects have also been announced, including construction of a gigantic 1,650-meter bridge over the Yangtze.

"It's Hollywuhan," one observer says. "Money is pouring out and companies wanting to set up here are getting the red-carpet treatment."

Wuhanese people, in the meantime, are finally beginning to regain confidence. Even after the end of the lockdown, many waited before going out again. "It's only really been since last month that I see people in shopping centers again," on city resident explains.

No new COVID-19 cases have been recorded in Wuhan for several months, but the fear hasn't completely disappeared. "I am ashamed to say, but I'm still afraid to meet friends who've been infected," says another resident.

On campuses, students are still asked not to go out unless absolutely necessary. People in Wuhan also have in mind that the easing of sanitary measures may be short-lived, as Beijingers discovered in June, when the Chinese capital experienced a sudden increase in new cases linked to a cluster from its main wholesale market. Authorities there responded by immediately quarantining contact cases, locking down residences near the market, and conducting mass testing.

Another sign that things are going back to normal is that on Sept. 16, Wuhan airport became receiving international flights for the first time since January. CCTV broadcasts showed the arrival of first travelers wearing masks. Staff members were pictured wearing full protective gear and face shields.

The passengers — most of them Chinese people returning home — must present a negative test done less than 72 hours prior take off. Once in China, they must undergo a strict quarantine in a hotel designated automatically. In Wuhan, the danger now comes from outside.