China's Bogus Death Counts And The Benefits Of Realpolitik

The insidious path of COVID-19 across the planet reminds us how small the world has become. Worldcrunch is delivering a daily update on this crisis from the best, most trusted international news sources — regardless of language or geography. To receive the daily Coronavirus global brief in your inbox, sign up here.

SPOTLIGHT: CHINA'S BOGUS DEATH COUNTS AND THE BENEFITS OF REALPOLITIK

Can China be trusted? The question, posed by its neighbors for centuries, has moved to the center of the world's political and economic agenda with Beijing's emergence the past decade as a virtual superpower. With the global pandemic of COVID-19, the trust factor now has taken on another set of implications, and gravity: Friday, after weeks of doubts about the impact of the virus, officials dramatically revised the death toll by 50% in Wuhan, the central Chinese city where the novel coronavirus is thought to have originated late last year.

The veracity of the death toll raises other questions about the management of the crisis, which has since spread to virtually every country in the world. Speaking to the Financial Times, French President Emmanuel Macron tersely said: "Given these differences, the choices made and what China is today, which I respect, let's not be so naive as to say it's been much better at handling this."

Indeed, the COVID-19 crisis marks an unforeseen turning point for China's place in the world, after 40 years of carefully weaving its soft power and imposing its manufacturing might. The country's initial response highlighted the one-party rule's capacities in enforcing a tough lockdown, which some saw as an opportunity for China to fill the void left by the U.S.'s inaction and Europe's self-confessed woefully inadequate responses to the crisis.

But to be a true leader of the world pack, you also need trust. For large swathes of the population, coronavirus is — as U.S. President Trump put it several times before thinking better of it — a "Chinese virus," leading to reservations about how we can trust the country to successfully contain a pandemic it's seen as having unleashed. But as the South China Morning Post notes, more than the speculation surrounding the origin of the virus, it's Xi Jinping and his government "penchant for secrecy", silencing of whistleblowers and general tendency for covering up domestic problems that is losing China the world's trust and hampering any ambitions of bonafide Chinese leadership.

U.S. historian Hal Brands puts it bluntly in Bloomberg: No, in the long run, China cannot be trusted. Still, he says, that doesn't mean that the world shouldn't work hand-in-hand with Beijing. It has no choice, really, as scientific, medical, economic and social cooperation between nations is the only way out of the current situation. "A coronavirus detente," his piece concludes "could well be a good idea, so long as we keep its limitations in mind."

It is a keen reminder that the old precepts of realpolitik can, and sometimes must, be applied to unexpected events in the modern world. "Can we trust China?" may not be quite the right question to ask right now, but rather: "How can we still work with China, knowing fully well that we don't?"

• Revised tolls: Wuhan revises death toll by 1,290 to 3,869, an increase of 50% following updating reports and statistical reviews. China denies accusations it has covered up deaths. Meanwhile new figures in Ecuador suggest thousands could have died, far beyond 403 so far reported.

• Economic blows: For the first time in decades, China GDP shrinks by 6,8% in first three months of the year. In the U.S. 22 million jobless claims have been filed since the pandemic began. Stock markets nevertheless are heading toward second straight week of gains.

• Crackdown on shutdown: Philippines President Rodrigo Duterte threatens to send military and police "like martial law" in Manila, following reports of an upsurge of cars on the capital's roads.

• "Lucky" break: Donald Trump's former personal attorney Michael Cohen will be released early from prison due to the pandemic.

• Back to (different) Earth: Three members of the International Space Station crew return to Earth after spending almost a year in space.

A WORLD WITHOUT SPORTS: An American springtime without baseball, European soccer leagues shut down, cricket season on hold in India, no Roland Garros nor Wimbledon. Health experts around the world all seem to agree that resuming sports would be too risky if the outbreak persists or recedes and reappears after summer. Here are snapshots of what is happening for major sports around the world:

• Soccer: Play was shut down in mid-March in all European leagues, with a strange exception of Belarus, which hasn't even imposed restrictions on fans coming to watch. In the meanwhile, the German Bundesliga is set to become the first major league to return to action as its players started training last week. La Liga in Spain disclosed its first protocol on how football teams should return to training when the government allows it. According to the Spanish daily sports newspaper Diario AS, the league is also polishing a protocol for matches behind closed doors — confirming that stadiums will take time to open for fans.

• Basketball: The NBA was the first sports league in the world to suspend its season "until further notice" due to the coronavirus pandemic. One month later, no decision has been made about when basketball could return. Moreover, with the season on hold, many players have been "unable to even touch a basketball", and will need weeks to get back in shape, reported NBC Sports Boston. Meanwhile players are having some sweat-less fun with the eternally slow playground game of H.O.R.S.E.

• Baseball: Holding the world's first professional baseball game in 2020, Taiwan's league went ahead with its regular season and played its opening game on Sunday, April 13. In Taiwan, playing behind closed doors doesn't mean the stands were completely empty — a crowd of mannequins and cardboard cutouts, some even wearing face-masks stood in for the missing fans.

• Tennis: With the pandemic shutting down ATP and WTA stars including Rafael Nadal and Kiki Bertens will clash in a virtual match from their homes, swapping their rackets for a PlayStation 4. The innovative Mutua Madrid Open Virtual Pro will take place from 27 to 30 April.

• Cycling: The Tour de France is down, but not out. Yet, at least: The legendary monthlong cycling race has been rescheduled to begin August 29. Crowds will hopefully be lining French roadways, with proper distance between them.

• Dog days: Finally, there is this "sports video" that tells us where our quarantined existence has brought us! 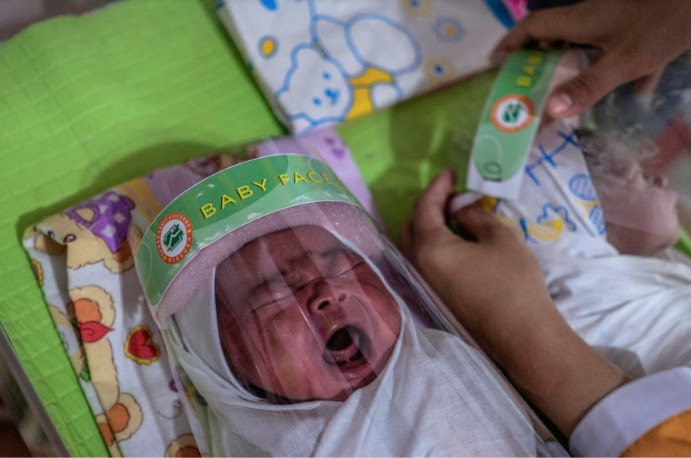 IRAN — PARLIAMENT V. GOVERNMENT ON DEATH TOLL: Iran's parliament has publicly challenged the government's official figures on the spread of coronavirus inside the country. In a report, it estimates that 8 to 10 times more Iranians are infected than the government has reported, and that the death toll is actually twice as high.

• According to the ISNA agency. the report also stated that government figures effectively only include the really sick, and that test results on suspected patients were not entirely accurate.

• Deputy-health minister, Alireza Raisi, according to Hamshahri news, admitted that there were "certainly" more infections in Iran than the official figures but nobody knew enough about the dynamics of contagion in Iran to "cite five or six times the official figures" as a more accurate count.

Anything can come from anywhere, turning anything or anyone into developed or undeveloped.

— Buenos Aires-based jurist and lecturer Marcelo Elizondo in Argentinian daily Clarin. Read his full piece here, translated from Spanish by Worldcrunch: Globalization: As Fragile And Irreplaceable As Ever.

AUGMENTED DISTANCING: The New York Times is rolling out a pretty nifty feature on its iOS app, using augmented reality to "show you how social distancing guidelines can apply in real life: at the grocery store, on the sidewalk, or anywhere else." The app superimposes social-distancing circles onto live footage from your smartphone's camera — and even on the feature's demo video, we can see how tricky it is to fully respect them.