The Niche Businesses Feeding "Chinese Stomachs" In The U.S.

The coronavirus pandemic has been both a boost and a challenge for delivery services like Chowbus, which specialize in Chinese fare.

NEW YORK — Like many New Yorkers, playwright Zhu Yi stopped taking public transport and eating out at the end of February — even before Mayor Bill de Blasio ordered the shutdown of all restaurants, bars and cafes to counter the daunting rise of confirmed COVID-19 cases. But that also meant ending her regular visits to Chinatown, which is more than an hour's walk away.

Instead she started using food delivery platforms for certain vegetables like chives and for Chinese favorites such as "phoenix claws" (spiced braised chicken claws). Not only are these items rarely found, if ever, in a regular American supermarket, but they are astronomically expensive. Whole Foods, now owned and operated by Amazon, sells Chinese chives, for example, at around $3.60 per ounce. Customers using a Chinese delivery platform, in contrast, can buy the same product for a twentieth of the price.

In New York alone there are several dining apps, including Chowbus, Yun Ba Bao (YBB) and HungryPanda. For fresh commodity delivery there's FreshGoGo as well as a number of Chinese-Asian supermarkets. Websites such as Yamibuy focus on the snacks and hot foods that Chinese consumers crave.

These specialized services cater to a niche market in the United States — the Chinese diaspora mostly — and have grown little by little in recent years. But with the pandemic upending the way people go about their normal lives, the catering and fresh food delivery businesses suddenly have new relevance, along with new challenges.

The platforms are similar, in many ways, to America's mainstream food delivery platforms such as Uber Eats, Seamless, Seamless, or even Amazon. What sets them apart are the Chinese interfaces, their use of social media such as WeChat and the cuisine options, of course.

Interestingly, not every minority ethnic group's eating habits have given rise to their own delivery sector in the United States. Italian or Mexican foods have evolved to become part of the country's mainstream cuisine, and thus can be easily found on major U.S. delivery apps. But genuine Thai or Japanese foods have, up to now, failed to attract a loyal audience massive enough to support their own delivery system.

But with the pandemic upending the way people go about their normal lives, the catering and fresh food delivery businesses suddenly have new relevance, along with new challenges.

The rise of Chinese takeaway and supermarket platforms says a lot about the demographics of their users. Customers are Chinese students and new immigrants who are numerous enough to support such businesses, yet not so many that the mainstream apps join the battlefield.

Users also tend to be people who have not fully assimilated into local life, even if they've been in the United States for quite a long time. Their shopping habits and language preference remain distinctly Chinese.

"We Chinese people have special needs for our Chinese stomach," says Paul Yang, founder of the YBB. "The world is perfect when a Chinese stomach is comforted."

The coronavirus outbreak has opened a new chapter in the evolution of these businesses. With so many Chinese restaurants now closed, Chinese takeaway services are in even greater demand. Chowbus, one of the largest Asian food and commodity delivery platforms in the United States, has had to increase its workforce from 3,000 to 6,000 drivers in the 14 cities it operates.

"Our business has doubled in less than a month," says Chowbus founder Wen Linxin.

Even before local governments began ordering restaurants to close, foot traffic in America's Chinatown dropped sharply starting as early as February due to the racial stigma that was originally attached to the coronavirus. Sadly, there have been reports of racist attacks as well. 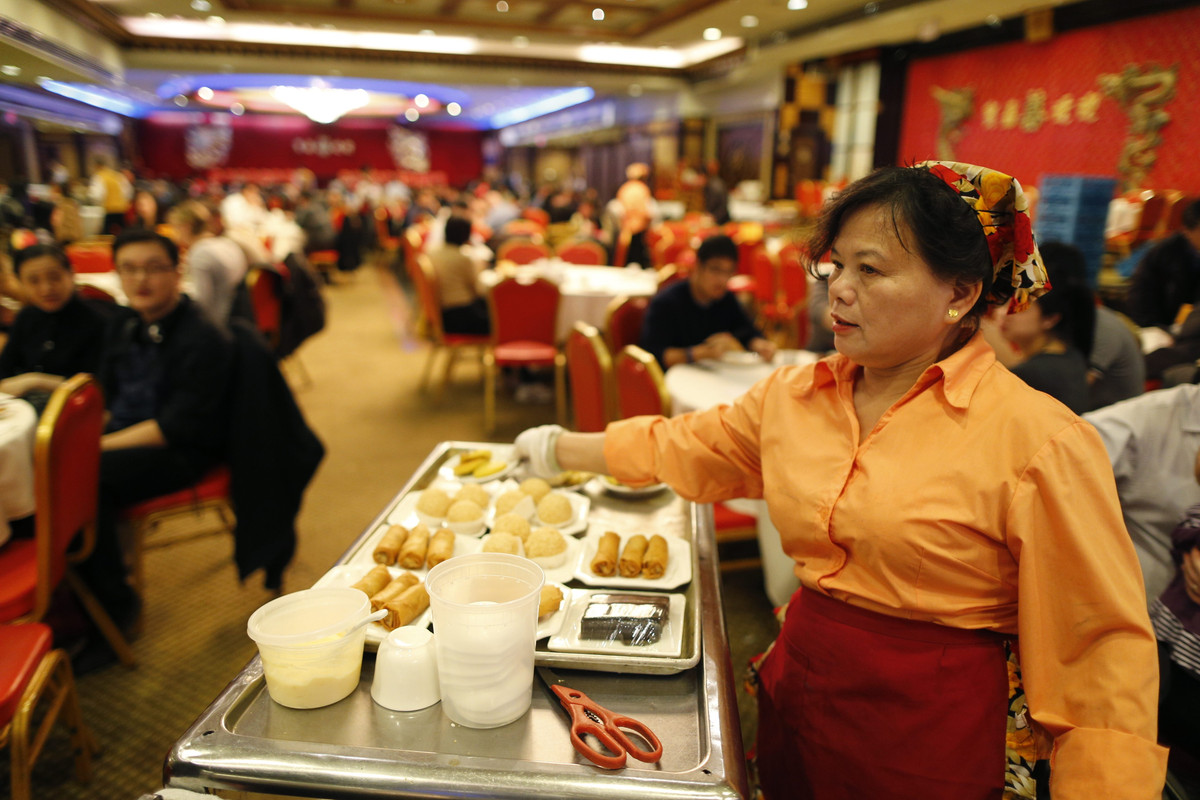 Inside a Chinese restaurant in Chinatown — Photo: Pascal Deloche /Godong/DPA

Sanitary safety considerations, difficulties in obtaining key ingredients and rising costs caused by the pandemic have also contributed to the shutdown of many Chinese restaurants. And yet, as Paul Yang would say, there are still plenty of "Chinese stomachs" to feed, which is good news for Chowbus and other delivery services, albeit complicated, in some cases, for the short-handed and short-stocked restaurants trying to supply them.

"We are all trying to survive," says Jessie Zhang, owner of the popular Little Tong Noodle Shop, in New York's East Village. Orders have indeed soared lately, she acknowledges. But the eatery's earnings are still down because of the profit shared with the delivery platforms.

The coronavirus outbreak has opened a new chapter in the evolution of these businesses.

The platforms, in the meantime, face their own particular set of challenges, especially when it comes to supply chains. Valerie Imbruce, an academic specialized in the sales of Chinese vegetables in the United States, says that in New York, for example, produce destined for the Chinese diaspora come mostly from local American farms. Nevertheless, the production and distribution channels, she adds, are very different from those of the mainstream market.

Most of the fruits and vegetables in American supermarket chains come from wholesale giants, and they do not offer things specifically catering to the Chinese diaspora. In contrast, the suppliers of Chinese-Asian supermarkets, fresh food delivery services and takeouts are often small farms specializing in Asian produce. With the pandemic, these decentralized suppliers have added even more uncertainty to the food chain.

For that and other reasons, YBB — which is particularly popular with the white-collar Chinese workforce in places such as Wall Street — has had to change its business model. It can no longer, for example, do group deliveries, with customers waiting in line to pick up pre-ordered lunches. Also, the number of restaurants YPP partners with dropped suddenly from nearly 80 to fewer than a dozen.

To offset the loss, YBB added more than 20 delivery vans and switched from a collective delivery model to one-to-one services. The strategy has worked, and its revenue has reached a record high.

The platforms are also having to go to extra lengths to reassure customers and protect their workers. HungryPanda, launched in February, has a large stock of masks for all its couriers, and offers non-contact delivery services. YBB requests all its drivers to wear protective gear and conduct a sterilizing of food packages once they reach their destination.

In the meantime, certain Chinese delivery platforms and restaurants are showing solidarity with the country that hosts and shelters them. "A lot of restaurants are so busy already, but they still go out of the way to make free meals for health care staffers, so we are delivering them for free," says Mr. Wen of Chowbus.

More than anything, though, these delivery services are a bridge. Many Chinese people in the United States found themselves cut off, starting in March, not only from their circles of friends, but from their daily rituals and eating habits. Even more than before, they're isolated islands in a foreign country. In their small way, the Chinese delivery apps help bring those islands closer together.

HONG KONG — The Beijing authorities have finally decided to set aside the Hong Kong Special ...

After months of quiet amid the COVID-19 crisis, Hong Kong demonstrators attended an unauthorized ...