The Solitude Of Sicily's Tunisian Wives And Widows

A woman on the Foro Italico in Palermo, Italy - Francesco Militello Mirto/NurPhoto/ZUMA

Most Tunisian men in the Sicilian port town of Mazara del Vallo work in the fishing industry. But while they're out at sea, their wives stay home, where the rules of tradition leave little room for integration.

MAZARA DEL VALLO — In her home in this historic fishing port in western Sicily, Habiba Harrazi prepares three different types of makroud, the typical sweets of Tunisia. "Dates, chickpea flour and sorghum," she explains to those who want to place an order.

Cooking used to be a pastime, but since her husband, Salem Alilou, died in 2018, it became much more than that. Her son is a college student in Siena, and Habiba's monthly income consists of her 500-euro survivor pension. And so, to make ends meet, she cooks. "I also embroider clothes for weddings," she says in her blue and white tiled living room, which overlooks the street.

Originally from Mahdia, a coastal city 200 kilometers southeast of Tunis, Habiba Harrazi, 63, is the oldest of her neighbors. Raised in a family closely tied to the customs of the Tunisian tradition, she inspires authority.

"It was my father who introduced me to Salem, telling me he was the man he had chosen for me," she explains. "Salem came to the meeting directly with the engagement ring. Within three months we got married and he took me to Mazara in 1980."

Habiba's home has become a meeting point for the Tunisian women of Mazara del Vallo, and at least 10 of them are also fishermen's widows. Among Mazara's Tunisian men, roughly four out of five work in the fishing industry. Deaths and injuries are common, according to Italy's Institute for the Insurance for Injuries on the Job.

Be it injuries or war, the dangers leave Mazara's women in limbo, in particular because, as local sociologist and journalist Francesco Mezzapelle explains, the Tunisian wives don't integrate. "They came to Mazara only to join their husbands," he says.

Once this bond has disappeared, Mezzapelle explains, the initial reaction of the widows is to close themselves off even more. "The men they married are the only link they have with the city, even if they are always absent because they are at sea," the sociologist says.

Mazara del Vallo is a town like no other in Italy. A short walk from the city center will take you from Baroque buildings to the casbah, the old Arab town that sprawled around the fortified citadel. It is a maze of short alleys and courtyards that sprung up after the Arabs conquered Mazara and Sicily after 827 AD. Today, this part of Mazara del Vallo still has strong Tunisian vibes, and a substantial Tunisian community — most of the town's 3,000 Tunisians live here.

Near Largo Mahdia, a couple argues in Arabic in front of their house. A Mazarese on a bike interrupts the conversation to complain about the noise they made the night before: "We must stop with this loud music at all hours!"

In the heart of the alleys, along via Pilazza, Ali Jmar's house is a must for tourists. Paolo Ayed, a local guide, explains to a group from northern Italy the origin of the red and blue decorations that everyone wants to photograph.

Mazara del Vallo is a town like no other in Italy.

"Ali's wife didn't tolerate him smoking indoors and he didn't want to be on the balcony. So Ali made the ground floor his refuge, decorating it in his way," Ayed explains. "From the inside, he moved on to decorate the outside. As a former fisherman, he managed to be a craftsman."

The Tunisians arrived in Italy in the late 1960s, and many settled in Mazara where the fishing industry was booming. They arrived thanks to the relations maintained with the Sicilians who emigrated to Tunisia from the second half of the 19th century and returned to their homeland after Tunisian independence in 1956.

Until the 1980s, Tunisian immigrants were almost exclusively men — then women arrived through family reunification policies. Today, women make up 40% of the community. After the earthquake of 1981, many buildings of the Casbah, damaged and abandoned, were occupied by the Tunisians who settled in the neighborhood.

The same year an elementary school opened where Arabic and French were spoken. "It was born at the behest of the Tunisian government, which intended to help its citizens abroad, in anticipation of a project to encourage the return of emigrants which then failed," explains Antonino Cusumano, president of the Euro-Arab Institute of Mazara del Vallo.

Salah Omri, the school teacher, proudly explains that "the Tunisian government still wants to make its presence felt." In reality, in poor condition and with only 18 students, the school is what remains of a vanished idea, the symbol of an integration that was never fully realized.

Like Habiba Harrazi, 50-year-old Zahira Hamza is also from Mahdia. She lost her husband, Rachid, to cancer. He'd spent 30 years working on fishing boats. "In 23 years of marriage, we only spent five years together," she says. "I didn't imagine life would be like this — I didn't know that being a fisherman meant being at sea all the time."

On one occasion, because of his work, Rachid Hamza was even kidnaped in a case that sounds a lot like the Libya stalemate. In 1996, Rachid was arrested by the Libyan coast guard while he was on board a fishing boat in international waters — which Tripoli considered Libyan territorial waters — and was imprisoned in Misrata. 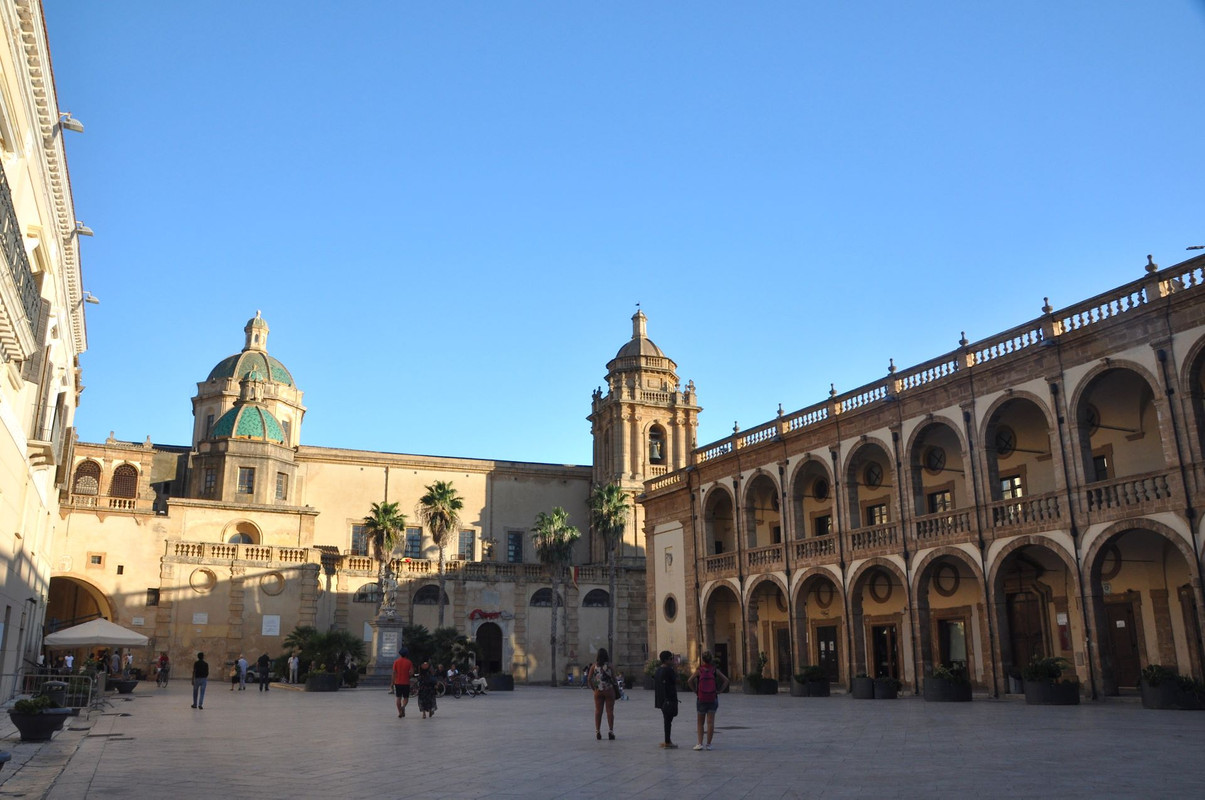 Rachid Hamza was released after six months. Today the 18 seafarers arrested on Sept. 1 have been waiting for more than a month to learn their fate. The eastern Libya militias accuse the fishermen of trying to smuggle drugs and said they would release them only after Italy releases four Libyans who were sentenced to 30 years in prison after they were found guilty for the deaths of nearly 50 migrants on Aug. 15, 2005. Libyans call them the "four footballers," and say they were just trying to seek their fortune in Europe.

Unemployed and with four children to support, Zahira Hamza lives with the small amount of savings that her husband left her, while waiting to get a survivor's pension, which is not always easy. It is a slow and tortuous procedure through Italian and Tunisian red tape.

In addition to economic problems, Zahira has to deal with the judgments she feels weighing on herself. "Some would say that now I'm happy to take my husband's money, but I miss him," she says.

When one of the young daughters asked her to take a bike ride, she forbade it, even on Habiba's advice, because it was not suitable for the period of mourning. "I was always waiting for Rachid to come back to make the decisions together," she says.

Now her life is guided by her friend's advice and the rules of tradition. For the first time, she has to decide for herself what to do and discuss with the family in Tunisia about the children, the house and the type of job to look for. "I try to tell her how to be a widow with dignity," explains Habiba.

This is common among Mazara's widows. "Some women live in the shadow of their husband," says Samia Ksibi, a cultural mediator of the San Vito non-profit foundation in Mazara del Vallo.

"When they become widows, their status among compatriots changes. The community tends to pity them, identifying them just as widows," she explains. "Sometimes they despise each other because they think they can't get by on their own. But over time they turn out to be better than their husbands at managing every aspect of life, redeeming themselves. Paradoxically, in their new condition, they acquire greater autonomy, perhaps even taking a driving license."

As Zahira herself explains: "I try not to be just 'Rachid's wife' anymore — just Zahira. I'm preparing to stay clear of people who tell me what to do with my life."

Across the sea, in the port of Tunis, the customs officer on duty must have been surprised when, on Aug. 1, a young woman arrived holding a bouquet of flowers.

"When they become widows, their status among compatriots changes."

The woman, 22-year-old Chedlia, was born and lives in Mazara del Vallo. She speaks Arabic but does not read it, which is common among second-generation Tunisians. With her mother, Fatima, she made the trip to visit her father in Bizerte, 65 kilometers north of the Tunisian capital.

"The flowers are for my father," she told the official when asked to explain.

Bechir Lazrak, originally from Bizerte, was the latest victim among Tunisian fishermen in Italy. On June 14, the 57-year-old fell from the Maleno fishing boat that was moored in the port of Cagliari and died of cardiac arrest. That same morning, Chedlia had called him to tell him of the date of her graduation in Palermo, and her father had promised he would be back for the occasion. Less than two hours later, the owner of the Maleno boat showed up at her house to report the incident.

"I am 99% Mazarese, like all of my friends," says Chedlia. "But through mourning, I rediscovered my Tunisian origins."

She explains that up to middle school she was ashamed of her foreign-sounding name because classmates would mock her for it, so she went by "Lucia."

"I have always been an observant Muslim, but now I am even more so," she explains.

The mother, Fatima, only works occasionally and her late husband's savings — he earned around 700 euros a month — have almost dried up. She finds comfort in her confidence in her daughter. Unlike her mother, Chedlia is more integrated into Italian society and has all the tools to understand where to go from here. Right now, though, the young women is focused not on her studies, but on trying to find a new balance to her identity.

Chedlia does not know how she'll feel upon returning to Italy. For the time being, she's ok with having brought the flowers to her father and having graduated in political science. "What should I do in Mazara now that he is gone?" she says. "It seems to me as though he might still return from the sea."

It was nearly nine years ago that Mario Draghi first burst onto the world stage. The ...