A staff member clears snow from a miniature replica of the U.S. Capitol in Miniwelt, a tourist attraction in Lichtenstein, eastern Germany. - Jan Woitas/dpa/ZUMA
WORLDCRUNCH
2020-02-10

Welcome to Wednesday, where Myanmar police side with protesters, the Senate votes to continue Trump's trial and Europe's oldest person survives COVID. We also look at the reasons why the "capital of Canadian humor" isn't laughing so much lately.

• Myanmar update: Police officers join protesters in the state of Loikaw calling for the reversal of the coup, while some 100,000 gathered in the commercial capital of Yangon. One woman is in critical condition after being shot in the head while attending protests.

• Trump trial: Democrats presented sharp words, video footage of the Capitol mob and Trump's own tweets, while Trump's legal team argued that it was unconstitutional for a former president to be impeached. Six Republicans joined all 50 Democrats in voting in favor of the constitutionality of the trial, but 11 more will be needed to convict Trump.

• "They were clearly warned, and yet they went ahead": Experts from the People's Science Institute told the Indian government back in 2014 that the construction work in the Himalayas could lead to avalanches and landslides. The death toll in the glacier collapse disaster currently stands at 31, with another 165 still missing and at least 30 still stuck in a tunnel.

• Kobe Bryant crash probe: The National Transportation Safety Board has determined that the fatal helicopter crash carrying the basketball superstar was the result of the pilot's decision to fly in cloudy conditions considered "legally prohibited."

• Catty trial on Zoom: A Texas attorney was forced to say (for the record) "I am not a cat," after he was unable to remove a cat face filter on the Zoom court proceedings. 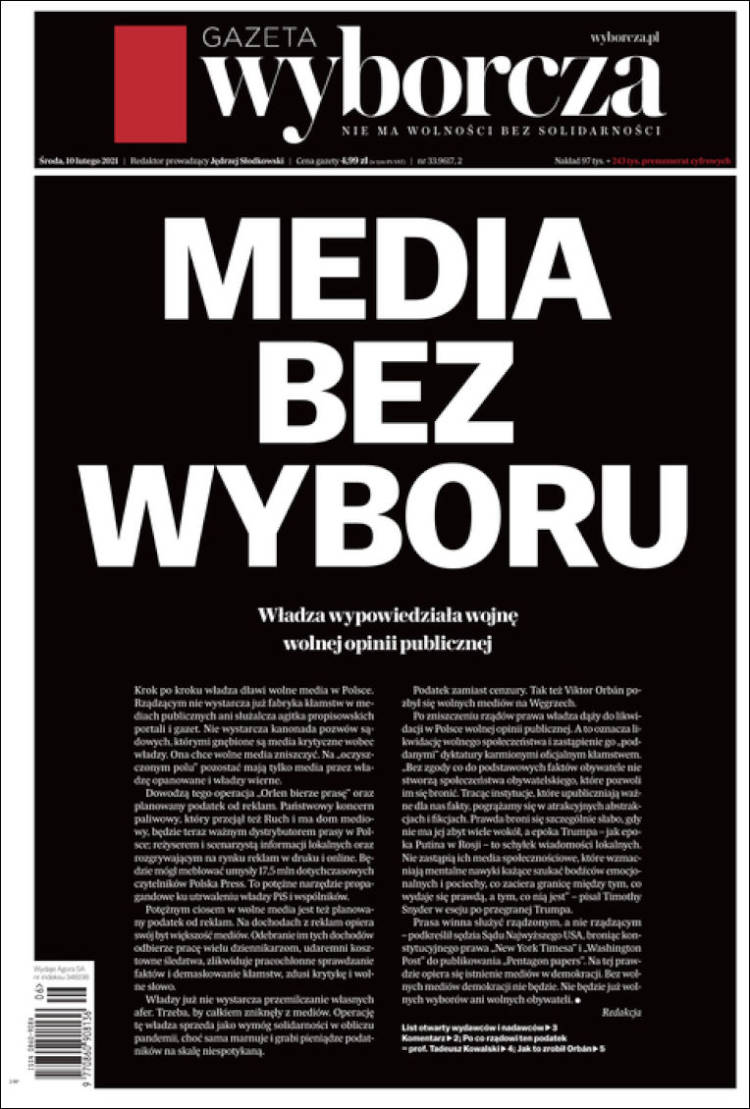 "Media with no choice," titles Warsaw-based daily Gazeta Wyborcza as the country's media suspend reporting and news coverage to protest a new advertising tax which Polish broadcasters and publishers say will undermine the freedom of the press.

Long considered the "capital of Canadian humor," the Quebec city is currently facing simultaneous storms: the pandemic, #MeToo accusations and a deeper debate on the limits of comedy, reports Hélène Jouan in Paris-based Le Monde.

COVID-19 is not the only hurdle the Montreal scene has had to face recently. The fall of Gilbert Rozon, 66 years old, a key figure in this comedy world and founder of the Just for Laughs festival, has contributed to its fragility. This "Rockefeller of Humor" was at the height of its power when, in October 2017, in the wake of the #MeToo movement, he was accused of being "Quebec's Weinstein." One, two and then dozens of women publicly accused him of harassment and sexual assault in cases that occurred over nearly four decades.

There are also other, deeper threats looming for Quebec humor. On Feb. 15, the Supreme Court of Canada will rule on whether or not comedian Mike Ward's mocking of a young disabled singer is permissible in the name of humor. Corrosive, subversive, even outrageous humor is not very popular in Quebec these days. "Today, most acts revolve around the private life, with comedians telling stories about their everyday life, their car, their wife or their boyfriend [husband or partner], but few dare to take on social or political satire, much less transgression," says Marc Laurendeau, an ex-comedian turned journalist.

Louise Richer, the founder of the Ecole nationale de l'Humour in Montreal, recognizes movements such as #MeToo, Black Live Matters and the emergence of diversity and gender issues for making people think about a crucial question: "How can we talk about all this while remaining funny?" But she also describes a world of humor in full transition: "Like tectonic plates, two movements clash: On the one hand, political correctness tends to make a joke fall flat, but on the other, I see our students' desire to renew their spirit of provocation."

A koala was blamed for a six-car crash in southern Australia, as reported by 9News Adelaide. Just after 7 a.m. Monday, a driver stopped to help a koala cross the South Eastern Freeway, around the city of Adelaide. The driver's vehicle was rear-ended, resulting in a chain of collisions. Though no serious injuries were reported, there were major traffic delays through the morning.

But did the koala get to the other side of the road? Luckily, the wandering marsupial (which national environmental laws include in a list of vulnerable species) was unharmed and taken back to safety in the wild — but not before taking the time to be filmed behind the wheel of its rescuer's car.

French nun Sister Andre, Europe's oldest person, has beaten COVID-19 on the eve of her 117th birthday. She had tested positive in her retirement home in southern France but had displayed no symptoms. Born Feb. 11, 1904, Sister Andre is also the second-oldest living person in the world, according to the Gerontology Research Group's World Supercentenarian Rankings List.

Presidents can't inflame insurrection in their final weeks and then walk away like nothing happened.

— U.S. Representative Joe Neguse of Colorado told Senators during the opening of the Senate impeachment trial of former U.S. President Donald Trump. In a vote 56 to 44, the Senate rejected Trump's defense team's claim that it would be unconstitutional to prosecute a president after he left the office.

The Tech Divide Is Shutting Minorities Off From Vaccines

Racial and ethnic minority communities that lack internet access have been left behind in the ...