COVID, Cancel Culture And Crisis At The Paris Opera

A pillar of French culture, the Paris Opera is struggling to survive both the pandemic and criticism of its lack of diversity. Will such an important institution be able to withstand the changes of time?

PARIS — Cultural institutions in France are in chaos, resigned to waiting for the vaccine before they can fully operate again. But for one of them, the drama doesn't end there. The Paris Opera will spend 2021 having a long, hard look at the question of identity after it found itself in the middle of a hot controversy about the lack of diversity of its dancers and singers.

The problems started from a long-form investigation of M, the magazine supplement of Le Monde, published on December 26th. When M journalist Elise Karlin met the Paris Opera's current director, Alexander Neef, and discussed three famous Rudolf Nureyev ballets — La Bayadère, Swan Lake and The Nutcracker — he confessed to her that "some of our famous acts will definitely disappear from the repertoire." Which ones? Neef didn't clarify but the link to Nureyev, a world-famous dancer and former director of the Paris Opera who died in 1993, was clear. His choreographies embody a world of white ballet, and La Bayadère even includes blackface in "Danse des négrillons."

Social media went haywire, and both the conservative website Valeurs Actuelles ("current values") and the far-right politician Marine Le Pen condemned the move, denouncing that Nureyev was being censored. Worried voices could be heard even within the opera house, where the Russian ballet dancer is a pillar.

In their way, these performers are on the front line in France.

Making works "disappear" has echoes of what some call Cancel Culture, an increasingly popular American form of ostracism that seeks to erase artists and works that symbolize white male domination and the oppression of minorities. And Alexander Neef, who was the Canadian Opera Company director from 2008 to 2020, has been immersed in North American culture for more than a decade.

Confronted with the implications of his own words, the Paris Opera leader was forced to U-turn, saying there had been an "unfortunate juxtaposition" of quotes in the M article. It wasn't a question of removing Nureyev's ballets from the repertoire, he said. Rather, he was looking to forgo "lyrical pieces out of step with the times." Neef, however, had re-read his quotes before the article was originally published, and not only did he approve the publication of the piece — the Paris Opera even tweeted the article. The piece was motivated by an upcoming report on diversity in the opera and touched on ballet and Nureyev. It had no interest in exploring the relevance of obscure outdated operas.

The controversy comes as this historic French cultural institution is almost bankrupt due to repeated strikes and the health crisis. It is currently waiting for another report, this time about its economic survival.

The two aspects – diversity and financial stability – are intertwined but also opposites in a subtle game. For years, the Paris Opera has opened its ballet repertoire to contemporary pieces, but it is structured around classic style and its dance school, which acts as its talent pool. Hence its reputation for excellence and conservatism, where hard work and a hierarchy of talent can make the army look like a playground. 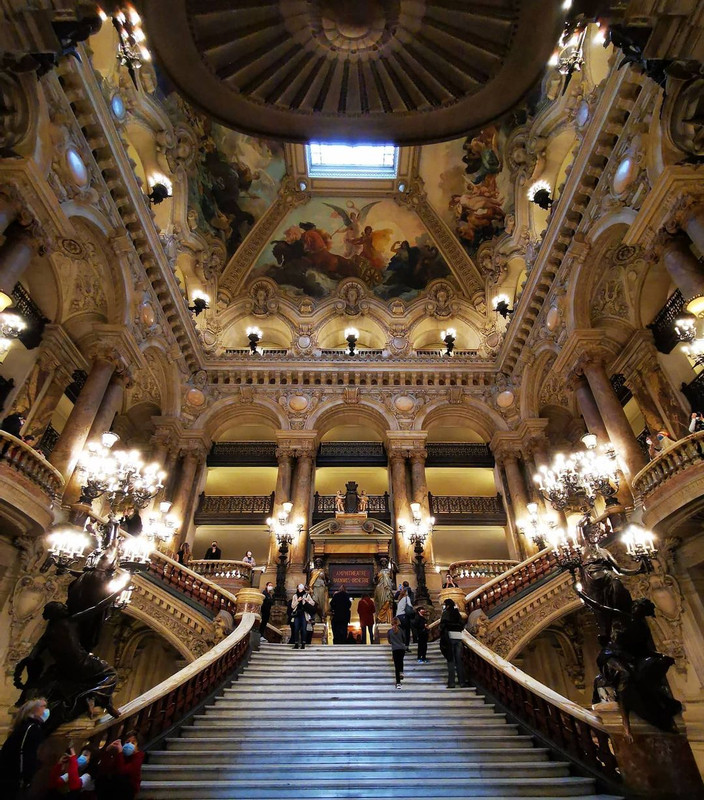 Inside the opéra — Photo: Caro Gorille

This reputation has echoes in the opera's audience, not exactly the youngest, most diverse or revolutionary people on earth. So, it's unthinkable that the beleaguered institution cut ties with the classic pieces that feed its coffers. Besides, La Bayadère has been available without blackface since mid-December via the Opera's paid streaming platform. At the same time, this type of show highlights how the Opera's lack of diversity goes further than that of other cultural venues with similar struggles. All the more so as urban dances that are in step with our era and are often Black-produced are being shown elsewhere.

The conundrum: in an uncertain and complex move, Opera and ballet need to diversify their repertoires to diversify their performers and their public. But in doing so, they cannot dismantle their identity. Yet a diverse repertoire is not the main draw of their program or their dance schools. To make matters more complicated, there are still some families who aren't always thrilled that their son wants to become a dancer.

France is certainly slowly beginning to go down the American road.

The question of a repertoire that includes pieces that are hurtful to minorities is a delicate one. Should they contextualize (give public warnings), take out blackface and the whitening of black bodies, or simply entirely remove these pieces? The Paris Opera is lucky, so to speak, that their non-white dancers and singers are simply asking for recognition and equity, and not to upend the table or censure any classic works.

In their way, these performers are on the front line in France. Here, diversity wins in culture by first fighting the injustices inflicted on creators, performers and audiences. The American approach is far more brutal: It attacks the works themselves. This leads to the destruction of statues, denouncing cultural appropriation and "canceling" artists who offend minorities, replacing universalism with cultural compartmentalization: Black spaces for Blacks, etc. Artists are promoted less for their art than their identity and sociopolitical commitments.

France isn't there yet. Freedom of expression is stronger here, our universalism resists for better or for worse, and we don't have an equivalent protest portal as well established as Black Lives Matter.

But France is certainly slowly beginning to go down the American road, which translates into galloping self-censorship by artists and programmers to pre-empt and avoid trouble and the promotion of unchallenging feel-good pieces. As the first leader of a major French cultural institution to publicly use the verb "to cancel" in the context of diversity, Alexandre Neef has now signed up for this debate — voluntarily or not.