The Cracks In Kaczyński's Grip On Poland Are Starting To Show

The right-wing leader is struggling to appease his coalition partners, raising the possibility of a realignment among the country's various political factions.

WARSAW — Polish leader Jarosław Kaczyński of the hard-right Law and Justice Party, the PiS, has long followed one simple rule: "I am Kaczyński and I can do anything I want."

He's taken a similar approach with regards to the Reconstruction Fund, as the EU's multi-billion-euro proposed recovery package is called. "We will take the money and do whatever we want with it."

These declarations no longer hold the same weight, though, now that Kaczyński's coalition partners are refusing to ratify the Fund. To get his way, in other words, the Polish leader will have to pact with the opposition, but he has no clue how.

Journalist Michał Karnowski recently suggested on the liberal news website Polityka.pl that a cross-party Monitoring Council should be set to work with the prime minister and oversee government spending with regards to the so-called National Reconstruction Plan (NRP).

Clearly this proposition came directly from the PiS headquarters. But it's a poor substitute to real negotiations with the opposition. And that's because it ignores the most important issue: the participation of the opposition and local governments in shaping the NRP.

Still, that such a proposition would even be aired shows that Kaczyński feels weaker and more and more cornered. Rightly so.

During a recent gathering of the conservative Agreement party, one of the PiS's coalition partners, party leader Jarosław Gowin presented a program that landed like a slap in Kaczyński's face: a strong middle class, warm relations with the EU, a friendly separation of Church and State. These are demands that clearly diverge from Kaczyński's program.

There's a growing awareness that Kaczyński can't cope with the crisis of power that he himself created.

"This is a further step away from PiS," said Rafał Chwedoruk, a political scientist sympathetic to the PiS party.

Gowin also made direct overtures to the more moderate Polish People's Party (PPP) and to conservatives from the Civic Platform party, claiming that they can all act together. Kaczyński's PiS, he said, is sinking and faces inextricable crisis. The time has come, in other words, for change.

Gowin's words coincided with shifts taking place within the opposition. Recently, Piotr Zgorzelski, deputy speaker of Poland's lower house of Parliament and a leading voice in the PPP, raised the idea of creating a new party, called the Polish Christian Democrats, to form a new parliamentary majority by bringing together conservative elements in the opposition, Gowin supporters, and sympathizers from the PiS. Likewise, Senate Speaker Tomasz Grodzki called on Kaczyński's opponents to take power and jointly develop a National Reconstruction Plan.

Not long ago, such calls would have sounded like the delusions of a madman. Today they are becoming an actual possibility. 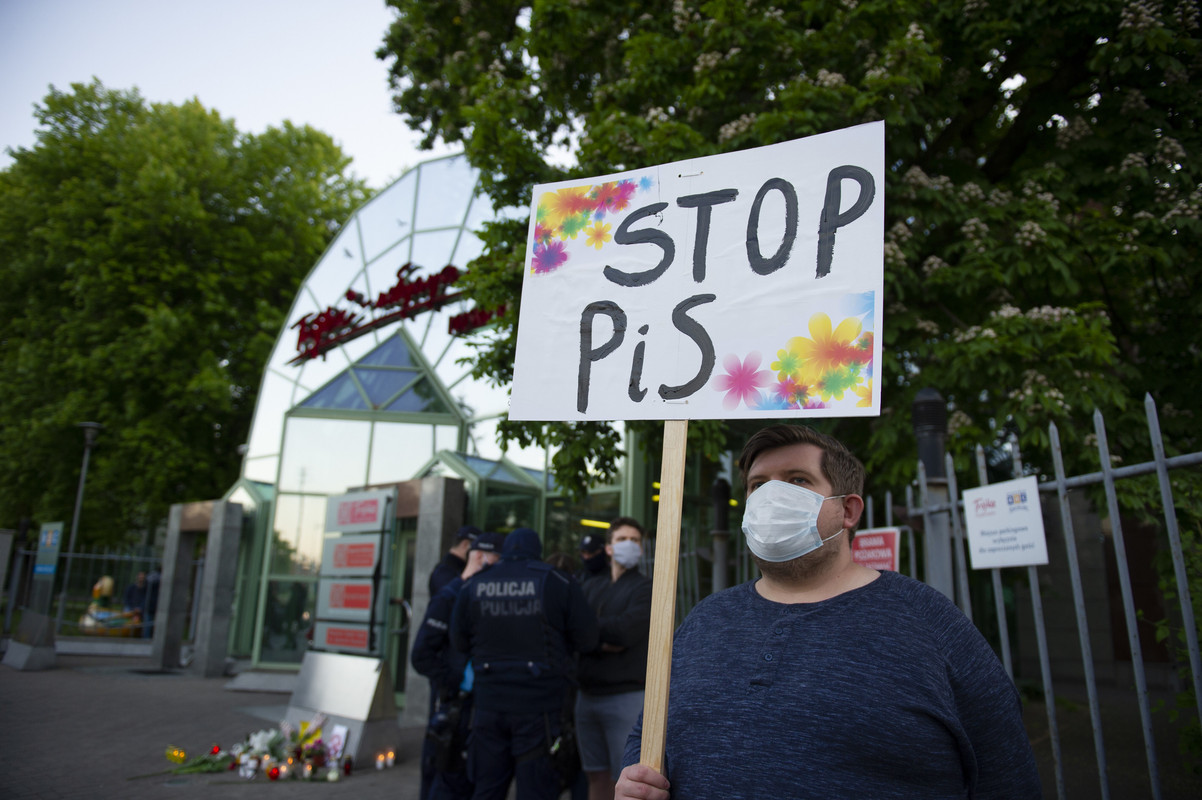 During a protest against the PiS party and censorship in Warsaw in May 2020 — Photo: Aleksander Kalka/NurPhoto via ZUMA Press

Kaczyński himself makes them even more likely, and that's because he can't abandon his principle of "I can do anything I want." A case in point is the recent ruckus over Adam Bodnar, Poland's human rights commissioner (ombudsman), who is being forced out — at the government's behest — by the supposedly independent Constitutional Tribunal, the country's highest court.

Why would that go to such lengths at a time when Kaczyński is dramatically losing ground and when this kind of scandal will only weaken him even further? It's precisely because Kaczyński is losing his grip. He wants to send the message — to his backers and opponents alike — that: "I can do anything I want."

The problem, though, is that within his camp, there's a growing awareness that Kaczyński can't cope with the crisis of power that he himself created. Recent comments by Józef Orzeł, a PiS loyalist and member of Kaczyński's inner circle, were telling in this regard.

"Bit by bit, the PiS party is repeating all the mistakes made by its predecessors, especially those committed by the Civic Platform from the end of its second term," he said. "It's only a matter of time before the opposition reaches its breaking point."

It's also a matter of time, it appears, before more PiS activists realize that the biggest obstacle to saving the ruling camp is Kaczyński himself. From there, more and more will leave PiS, and the leader's days will truly be numbered.

The presence of the faithful at Mass, regardless of the threat to their health and lives, is esse...