Pandemic Pollution, And Our Philosophical Duty To Clean The Air

NEW DELHI — I had never given thought to the provenance of funeral wood, until news reports revealed in late April that officials in Delhi had begun receiving requests to chop trees in city parks amidst the colossal surge in COVID deaths. It was a jolting statement to encounter, for it forced me to reframe a life-giver into a death-enabler in ominously stripped, urgent terms.

Wood, of course, had been used for cremation since ancient times, but to think of it as coming from our very midst instead of some sequestered supply-area bore a sting of abrasiveness. Would our public spaces remain the same now on or, for that matter, even the public that once walked and ran under their trees? "Nature repairs her ravages," observed the English novelist George Eliot, "but not all." She qualified, "To the eyes that have dwelt on the past, there is no thorough repair."

The world was quick to recognize her repairs last year during the global lockdown, when birds and animals started appearing "magically" from their hidden bowers onto our frozen civilized spaces. My most abiding memory from that long period of imposed isolation was the sighting of the Himalayas from the plains of north India, which happened due to the robust clearing of human induced pollution. It was after three decades that those great white sentinels impressed themselves upon the views of the Punjab plains a hundred miles to the south. And although I myself couldn't view those ephemeral vistas from our home further down in Ghaziabad, it felt enough to simply know that the Himalayas had gotten closer to me.

Birds and animals started appearing magically from their hidden bowers.

That exhilarating enlargement of spirit had everything to do with the three decades I spent in the mountainous regions of Himachal Pradesh, before my family's shift to the NCR plains in 2019. For all my growing-up years, those highlands had resolutely ensured that they were the only true high-rises. This was despite the severe urban development that had begun to inflict that geography during my teens and twenties, much like its plain-based counterpart. Nonetheless, the dignity of breathing fresh air in the Himalayas had remained fairly intact, as it still does to a certain extent.

With my shift to the gray-laden sprawl of the metropolis, I realized that untainted oxygen — a basic of life's prerequisites — was a privilege in itself. So when the surreal erasure of haze and smog manifested within a few weeks of the 2020 lockdown, I involuntarily found myself developing a habit of frequently checking the Air Quality Index. I knew that I wasn't alone in experiencing this strange passion, since a number of my Delhi acquaintances were also sharing their incredulity at those deepening azure skies. But I liked to believe, almost childishly, that my delight was "different", for I had nothing less than the Himalayas as my yardstick for comparison. Whenever a "very-good/healthy" reading of the city air conjured up in a cedar-green label, I found myself exclaiming, "This is like the mountains!" 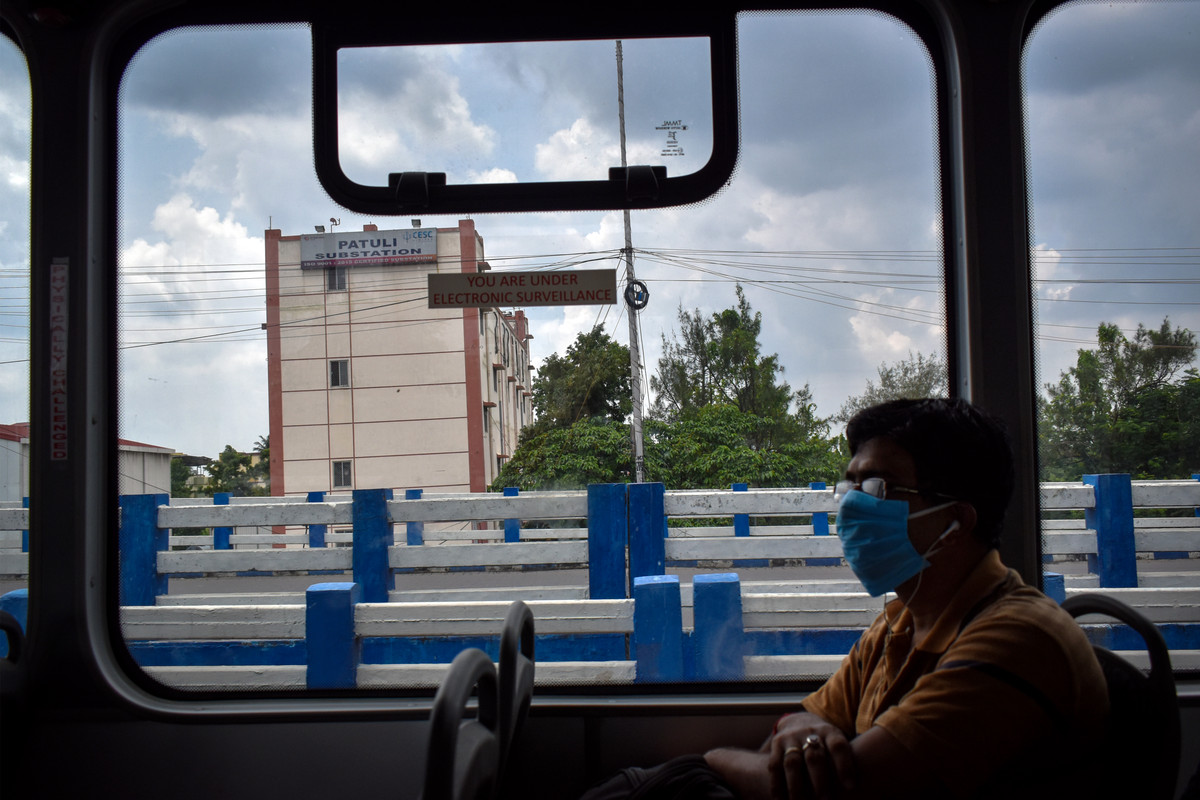 A man travelling on a bus during the COVID-19 Pandemic period in Kolkata — Photo: Sudipta Das

And yet, that joy was no "thorough repair". Not only was it temporary, it also underscored a horrifying reality of displacement and suffering. For those countless fleeing migrant workers who were never allowed to claim their city-homes as their own and forced into making arduous return-journeys on foot, the shift in environment was anything but revivifying. Today, when the second wave wreaks unprecedented havoc across India, that oxygen ironically becomes a leveller in its very brokenness, with the rich and the poor meeting a similar, cruel fate.

In May, when cyclone Tautkae brutally ravaged parts of Western India and led to palpable changes in temperatures across many adjacent areas, this sense of air's imbalance again came to the fore. Standing on my fifth-floor balcony, even as I exulted in the soothing embrace of the 16 degree dip in temperature, the pinch of the knowledge that this wasn't normal pressingly played along. After all, the sudden "coolness" that we experienced was the result of the same factor that had brought destruction in other parts of the country. And the factor behind that factor was obvious too, with news reports stoically blurting future disasters in making: "Tautkae result of climate change, expect more cyclones in coming years: Experts."

We have always been aware that we are nothing without air.

The philosopher David Abram observes in his modern classic The Spell of the Sensuous that like many native and ancient languages, classical Sanskrit makes an association of the inner self with the wind. There, "the word ‘atman' signifies not only the soul but air and breath too."

While water is understandably perceived as the "elixir of life", we have always been aware in an oddly understated manner that we are also nothing without air. Hence the ubiquity of the phrase hawa-pani ("wind-water"), and the inextricability of the two words. Ask anyone visiting the mountains about their first impressions, and they would instantly revel in the difference from plains: "Wahaan ka hawa-pani kitna alag hai…"

Perhaps more than any other philosopher, it was the Buddha who best understood the link between the soul and air, devising his practice-based spiritual teachings on this very connection. But it is the tragedy of our country that political opportunists and bigoted religious babas use such vital legacies as a ruse to overlook the deficiency of medical facilities that we have been acutely suffering from. For instance, recently, Baba Ramdev illogically advised patients undergoing heart-attacks to promptly practice anulom-vilomen route hospital. Not only do such crude suggestions strike as blatantly insensitive, they also have the effect of rendering the otherwise beneficial exercises undesirable by citing them inappropriately.

It has been said that the third world war will be fought over water shortage. If anything, the pandemic must serve as our greatest warning for such a war to never take place. For battles of a different sort have already been fought globally during this and the last year, all united by the need for air. As quantifying markers of something that we once took for granted become the norm of our daily vocabulary and existence — cylinders, oximeters, concentrators, ventilators and so on — air assumes an uncanniness like never before. How we would deal with this estrangement in the near and the distant futures is perhaps our greatest personal and collective challenge now on.

*Siddharth Pandey is a writer and photographer from Shimla.