In India, mental health has been impacted at a large scale - Mayank Makhija/NurPhoto via ZUMA Press

A year after the world's second most populous nation went into quarantine, a new study aims to calculate the cost in terms of mental health illness, suicide and inability to receive medical care.

NEW DELHI — On March 23, 2020, the Indian government announced a complete lockdown in response to COVID-19. This measure, taken in the name of public health, exacerbated many healthcare issues and inequalities. As we assess the lockdown's success or failure a year after its announcement, it is critical to look at not just what the lockdown did to prevent COVID-19 spread, but also to assess what the lockdown did to cause both deaths and negligence in terms of other important health requirements.

Although there is no official data on deaths caused by the lockdown, we created a publicly available dataset from media reports between April and July 2020. Our data shows that at least 989 deaths were directly attributable to the lockdown. These numbers are a gross underestimate, however, as media reports are not a comprehensive representation of the overall death toll. Even at this lower rate, though, these deaths indicate the humanitarian and health tolls that the lockdown instigated.

One of the direct health-related consequences of the lockdown is the deaths caused by a lack of timely medical care. At least 79 such deaths have been reported in the media, which include deaths due to transport restrictions or lack of ambulance to reach hospitals, refusal by hospitals to admit patients without negative COVID-19 reports, denial of care by hospitals to people from high infection areas, and lack of timely services for patients suffering from other health conditions. Take, for example, the death of a 34-year-old man in Pune who had severe anemia. The hospital staff admitted that the patient could not be saved because of a shortage of blood in the blood bank due to the lockdown and lack of availability of staff for non-COVID patients.

The lockdown also led to maternity mortality, an issue that India's health system has already struggled with. Media reports show that at least 10 maternity deaths happened as a result of a lack of timely care. One of these was a 28-year-old woman from Bangalore who had body pains and low hemoglobin count and was denied treatment by seven hospitals. Her husband, an auto-rickshaw driver, said "at every hospital, we were asked to wait, fill up forms, and then later informed that admitting her was not possible".

In many cases, the lack care during the lockdown went hand-in-hand with discrimination, hinting at the rampant inequalities and bias faced by socially marginalized populations in India's healthcare services. Several media reports have highlighted how being a Muslim or coming from Muslim-majority areas contributed to the denial of healthcare. In one such incident, a 22-year-old Muslim woman in Meerut who had an intestine infection was refused emergency care after the receptionist found out that she was from Mawana, a Muslim-majority area. After refusals and delays in treatment, she died. 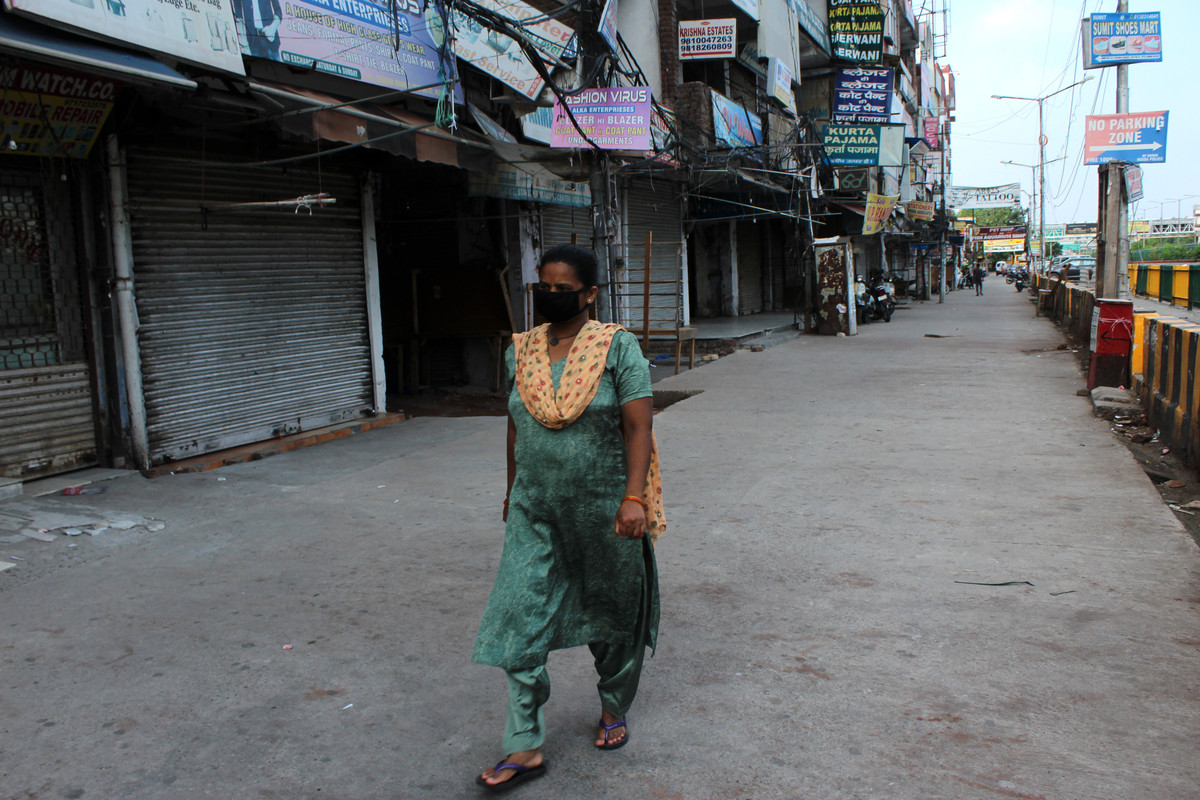 A deserted view of the Atta market in New Delhi — Photo: Mayank Makhija/NurPhoto via ZUMA Press

Lack of timely healthcare, however, was not the only direct health-related consequence of the lockdown. Mental health has also been impacted at a large scale. The data from media reports shows that at least 140 people died by suicide due to fear of infection and stigma, loneliness, and lack of freedom of movement. For instance, in two different cases from Uttar Pradesh, two young women died by suicide –­ one because of her inability to go to her parents' house and the other because of her inability to be with her stranded husband due to the lockdown restrictions.

The hurriedness and strictness with which the lockdown was announced likely worsened the anxieties and fears. Lack of effective health communication, absence of emotional and mental health support, and inadequate relief measures during the lockdown collectively contributed to increasing despair and deaths.

Overall, as the government's own data show, lockdown massively disrupted routine health services, including immunization and preventive care from life-threatening diseases in India. This disruption was uneven among states, with some states having a stronger commitment to welfare and healthcare performing better than those without it. By most measures, these disruptions will have long-term consequences, especially for children and vulnerable populations.

India's lockdown and its devastating effects are a tragic example of how policy measures, taken in the name of public health but without adequate preparations or support systems in place, can end up creating another kind of healthcare crisis. It is also an example that unless the issues of health are understood as deeply linked with socioeconomic wellbeing and support, policy measures like the lockdown are likely to do more harm than good.

Kanika Sharma is a researcher focusing on social inequalities in health. This dataset on lockdown deaths was created in collaboration with Aman, Thejesh GN, and Krushna Ranaware, and with support from Roadscholarz. The full dataset is available at: https://thejeshgn.com/projects/covid19-india/non-virus-deaths/.

How The Real Estate Market Ghettoizes Muslims In India

A year after riots in Delhi and elsewhere, Muslims are being forced out of their neighborhoods.