How India Is Failing Its Most Essential Workers

From salary cuts to protective equipment shortages, frontline workers are having to protest and plead just to get their basic dues.

CHENNAI — During the COVID-19 pandemic, frontline workers are keeping the country running, putting their own health and safety at risk. And yet, despite the sacrifice — and the public recognition they have received for their work – their struggles for fair pay continue.

Nasir Khan, 38, leaves home at 5 a.m. to reach Bhopal's Jhada Kabristan, where he wields his shovel and keeps digging graves until the familiar hearse van of the Bhopal Municipal Corporation (BMC) can be seen at a distance. At that point, Nasir starts donning a PPE kit. Once the van has arrived, the next two hours are charted out for Nasir, who has been a grave digger since the age of 10. Since the lockdown, Nasir and five other grave diggers have done the final rites of 90 bodies but have been paid for only four.

Earlier, they would receive Rs 1,700 inclusive ($22.70) of the cost of materials required for a funeral from family members of the deceased, and this amount would be divided among them. But with COVID-19, this source of income had been wiped out. Following the first phase of lockdown, the BMC had announced that graveyard workers would be paid Rs 5,000 ($66.80) for every dealing with coronavirus-infected corpses.

Nasir lives walking distance from the cemetery with his parents, wife and four children, but on most nights, the grave digger just sleeps in the burial ground, located in Jahangirabad, a COVID-19 hotspot in the city.

Each day, the workers race against time as every grave takes at least four to five hours to be dug. On May 6, the graveyard received six corpses at a time. Since then, the cemetery workers have kept at least 10 graves ready in advance. As per World Health Organization guidelines, graves for coronavirus victims have to be dug 6 feet deep, at the minimum.

"We don't know the COVID-19 status as the bodies come in airtight double plastic packing. We do the namaz and try to swiftly carry out the final rites and issue a certificate to the BMC worker or the family member of the deceased," says Rehan Ahmad, chairman of the cemetery's management committee.

On June 12, Nasir buried Gaffar Bhai, a fellow grave digger, who had gone home the previous night, developed chest pain and died on the way to the hospital. "To dig a grave for one among us had been gut wrenching," Nasir says. "We will never know whether he had coronavirus, but his family didn't receive any help from the government."

As the divisional commissioner and administrator of the BMC, Kavindra Kiyawat, explains: "Releasing the pending payment for the disposal of COVID-19 victims' bodies is a long-drawn process, as we have to verify the cases with the nodal centers involved. We have as of now paid Rs 80,000 ($1,068) to the grave diggers for the burial of 16 COVID-19 victims from the city."

"Unfortunately, the workforce of gravediggers, which is unorganized and not on any official payroll, has been left out," says Amulya Nidhi from Jan Swasthya Abhiyan. "In fact, they had not been trained on how to handle coronavirus cases initially and were provided with PPE only when the pandemic had peaked."

On July 2, four young men lost their lives due to asphyxiation while cleaning a septic tank in Tamil Nadu's Thoothukudi district.

When I approached the officials, they said I always had the option to leave this work.

In Chennai, 38-year-old Simon moved from manual scavenging to being a sanitation worker only after the lockdown. Simon, who used to clean septic tanks privately, found no work when the pandemic set in. On May 4, he joined the Greater Chennai Corporation (GCC) as a contractual worker. 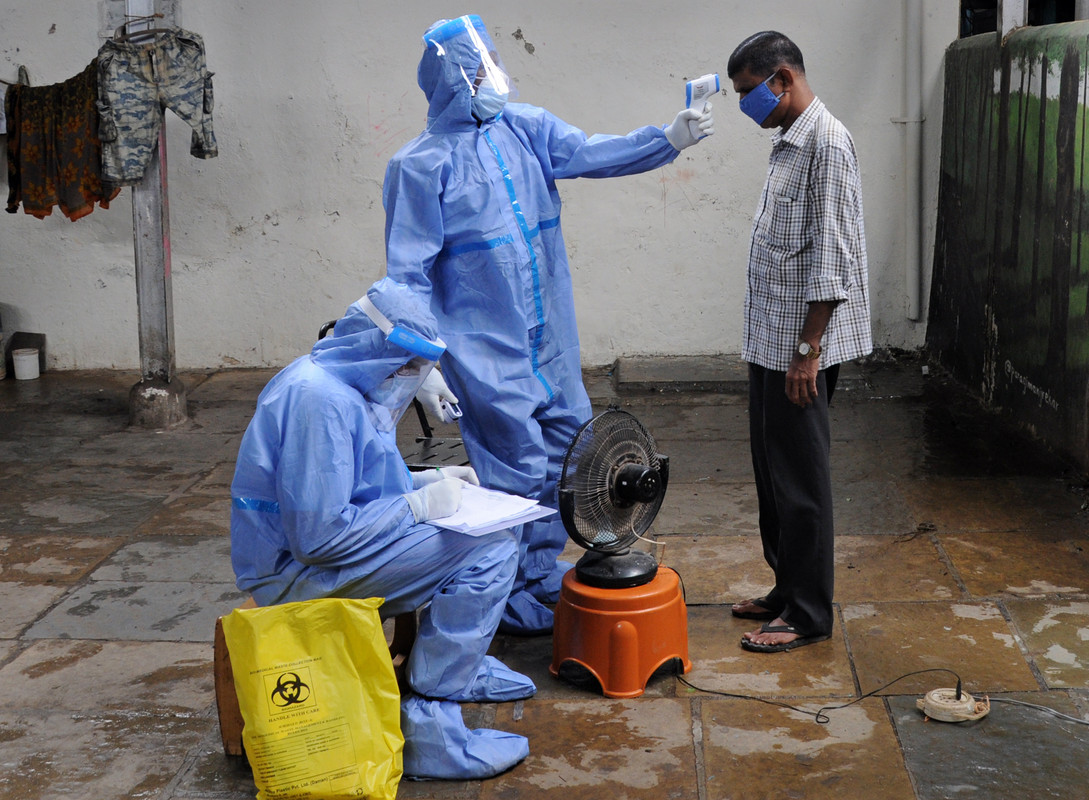 Frontline workers are putting their own health and safety at risk — Photo: Ashish Vaishnav/SOPA Images/ZUMA

He starts his day at 6 a.m. and goes about disinfecting coronavirus containment zones till 2 p.m., for which he is paid Rs 225 ($3.40) per day, and on days when his work continues till 5 p.m., he is paid an additional Rs 100 ($1.34). "I had worked without taking a single day's leave, yet 10 days' salary was deducted," Simon explains. "When I approached the officials, they said I always had the option to leave this work. This happens to all workers, but no one will speak up."

Officials of the Greater Chennai Corporation were unavailable for comment.

Across the country, sanitation workers are facing a tough time. Vicky Delikar is a sanitation worker at Satranjipura, one of the most affected COVID-19 zones managed by Bharath Vikas Group (BVG) India, an agency appointed by the Nagpur Municipal Corporation to lift door-to-door garbage. The 35-year-old has to prep his own PPE before he leaves for work as he can no longer use the two disposable masks provided by the company, to be used for three months. His handkerchief and a bar of soap are his saviors.

Work starts at 7 a.m. with pushing the garbage trolley, which is filled halfway to the top as he goes through the narrow lanes of the city's slums. By 1 p.m., the half-hour lunch slot begins, but considerable time is spent finding a place to eat, away from the dump yard and after washing hands. A few minutes into his lunch, Vicky is busy attending to complaint calls from his supervisor. Most days, lunch goes unfinished.

The workload for Vicky and his colleagues has increased manifold during the pandemic, as the workforce has been reduced. Each sanitation worker is handling four areas, as opposed to one, previously. They are also being roped in for miscellaneous work such as lifting construction debris and dead animals. The company asked them to not come to work on some days, and cut their pay citing a lack of funds. The workers received their salary for April on June 8, and the May dues are awaited.

Vicky and his 68-year-old father, also a sanitation worker, have been struggling through the lockdown, along with Vicky's mother, wife and three children. "If we raise concerns, we are threatened that we will be sacked," says Vicky, who has been doing this work for more than 17 years.

When contacted, additional municipal commissioner Ram Joshi remarked that sanitation workers might not be using the masks provided to them and they should be penalized for the same. He further said that he will look into the salary issues.

Bezwada Wilson, national convener of the Safai Karamchari Aandolan, noted that sanitation workers across the country have been facing arbitrary pay cuts from their measly salaries.

No money for medicos

The Karnataka government announced a salary hike for 507 doctors on a contract basis on July 2, giving in to their longstanding demand.

Meanwhile, final year postgraduate medical students at St. John's Medical College Hospital, affiliated with the Rajiv Gandhi University of Health Sciences, a designated center for COVID-19 treatment in Bengaluru, have been left in the lurch. Their stipends for May remain unpaid. 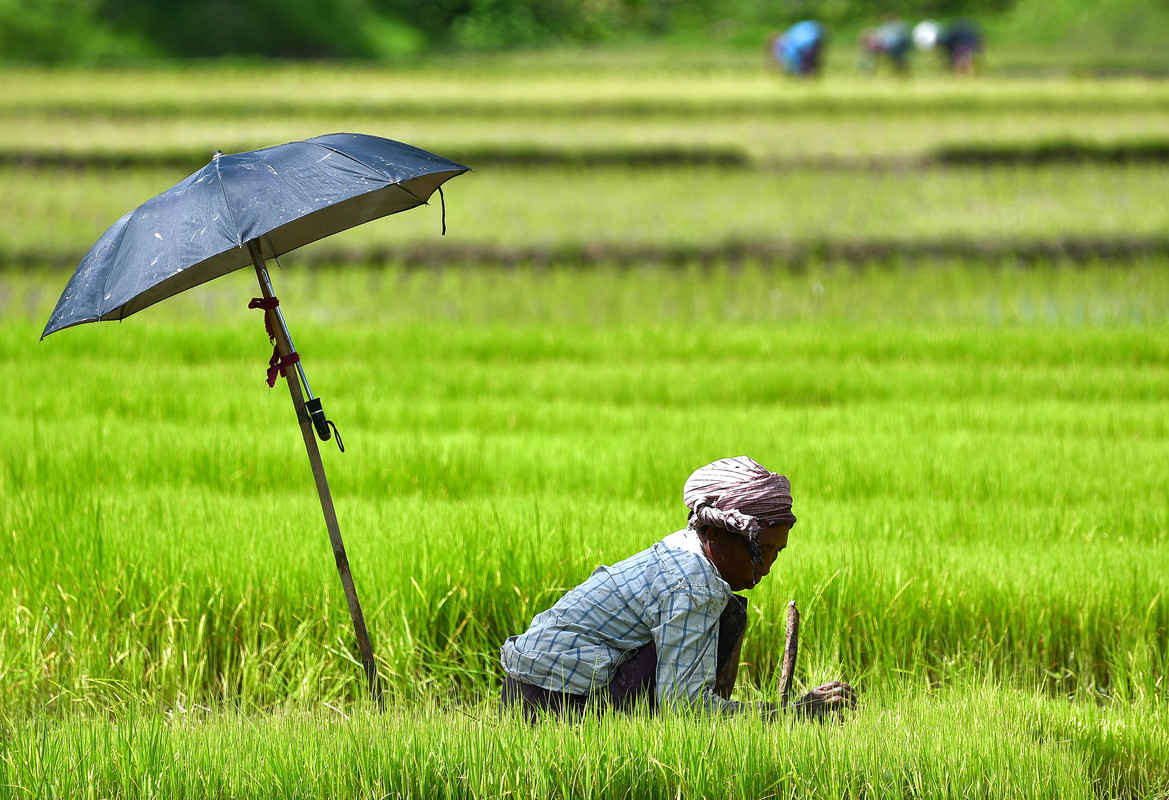 Plating seedlings at a paddy field on the outskirts of Agartala — Photo: Xinhua/ZUMA

Medical students (or "medicos"), who in a non-pandemic scenario would have written their exams, received their no-due certificates and been on the verge of securing a job, have no idea what to do know.

"Charity begins at home but the management turned the medicos away and asked us 'to find our own resources to manage.' How can we look for a job now, without a degree?" says one of the junior residents, on the condition of anonymity. "We are struggling to manage our families, rented houses and other expenses and the following months look bleak. We deserve our dues in these tough circumstances."

There are around 200 junior residents awaiting their stipend, even as those from the department of medicine are on the front lines of COVID-19 care.

On April 22, as per the direction of the Department of Medical Education and the Government of Karnataka, the Rajiv Gandhi University of Health Sciences issued a stern warning in a circular directing all its medical colleges to not stop salary of its faculty and medicos amid the coronavirus lockdown.

The St. John's Medical College authorities refused to speak on the issue and a mail sent to them went unanswered.

In New Delhi, doctors from the two hospitals under the North Delhi Municipal Corporation (NDMC) — Hindu Rao Hospital and Kasturba Hospital — threatened to resign en masse on June 14 because of the non-payment of salaries. Following a Delhi high court order on the same, the NDMC on June 20 stated that the salaries of doctors due for March and April had been released.

The doctors, who are well-acquainted with the perennial delays in wage payment, are now anxious about their dues for May. "We don't deserve to plead and protest for our basic, well-deserved salaries and want to concentrate on just our work," says Dr. Sunil Kumar, anesthetist and president of the Resident Doctor's Association, Kasturba Hospital. "My wife has taken leave from work to take care of our children as I have been working non-stop. With the stigma towards doctors, babysitters shun our homes and we cannot afford to house right now."

Another physician, Abhimanyu Sardana, an orthopedic specialist at Hindu Rao Hospital, says that doctors don't want to be stuck in this vicious cycle of non-payment.

We don't deserve to plead and protest for our basic, well-deserved salaries and want to concentrate on just our work.

Speaking to The Wire, North Delhi Mayor Jai Prakash said that the salary for the month of May will be disbursed soon for all doctors.

In April, 65-year-old Ramachandra Chachariya, from Khedi village in Khalwa district, Madhya Pradesh, lived through a farmer's worst nightmare. He had to undo and destroy the fruits of his own labor, by plowing back to the soil a large portion of his 50 tonnes of ripe pumpkin.

"With borders sealed and hardly any availability of labor, storage, transport facilities and a market to sell crops, the supply chain was broken," laments Chachariya, who has a Rs 7 lakh ($9,300) loan to repay to the Bank of India. "We gave away pumpkins for free to almost everyone around but there is only so much that could be saved."

In north and east India, mint species are grown on almost 150,000 hectares and the oil that comes from these is widely used in pharmaceutical and cosmetic products. India accounts for 80% of the world's mint supply. "It is cultivated in January and is ready to be reaped by May. This year, lockdown coupled with rains resulted in heavy losses for mint farmers," says Rajesh Kumar from the United India, a farmers' NGO.

With major consumers of dairy products like fast food chains, sweat shops and schools being shut, the loss has been massive. Floriculture farmers have been impacted too, with marriage functions taking a hit, says Kedar Sirohi, a farmers' leader.

Shivam Baghel, a 26-year-old from Paraspani village, Seoni district in Madhya Pradesh who had spearheaded the "online sathyagrah" move for fixing the Minimum Support Price for corn, said that corn farmers were forced to sell their produce at half its fixed price. On the other hand, corn is being imported and the 60% import duty has been reduced to 45%. On average, a farmer with an acre of land suffered Rs 15,000 ($200) loss at least," he said.

*Nalini Ravichandran is an independent journalist who has worked with The New Indian Express and Mail Today and reports extensively on health, education, child rights, environment and socio-economic issues of the marginalized. She is an alumna of the Asian College of Journalism.