BERLIN — It was a first in several ways when Lufthansa flight LH 9290 from Frankfurt landed at Washington's Dulles International Airport, last Tuesday at 3.42 p.m.: For the first time since the beginning of the COVID-19 epidemic, several top German diplomats visited the American capital. Also, for the first time, Chancellor Angela Merkel's foreign policy adviser Jan Hecker was ready to discuss the controversial topic of Nord Stream 2 face-to-face with leading representatives of President Joe Biden's government.

Nord Stream 2, a system of offshore natural gas pipelines that runs from Vyborg, Russia to Greifswald, Germany, is the longest undersea pipeline in the world. Germany has long been reliant on Russia's energy supplies, but such dependence triggered U.S. concerns. The United States Senate levied a sanction last July on the Nord Stream 2 and the companies involved, but Germany was still sticking to the project.

The date of the German-American talks was anything but accidental. This week, U.S. President Biden is in Europe — his first trip abroad since taking office more than four months ago. He will meet Merkel several times: first at the G7 summit in Cornwall, UK, a few days later at the NATO summit and an EU-U.S. summit in Brussels. Despite all the smiles for the cameras, the hard topic of Nord Stream 2 is squarely on the agenda.

Berlin wants to increase the capacity for Russian natural gas supplies to Germany and speaks of an "economic project." Washington warns of Germany's growing dependence on Russia and a snub to allies in the Baltics, as well as Poles and Ukrainians.

Biden consistently opposes Nord Stream 2, and the Democratic Party is considerably more critical of the Kremlin than the Republicans are.

Though taking the same basic line as his predecessor, Biden's administration is more conciliatory with Berlin than Trump's. This was only recently apparent when his government waived sanctions against the operating company of Nord Stream 2. For example, a recent report by U.S. Secretary of State Antony Blinken to Congress stated that the waiver of punitive measures against Nord Stream 2 AG in Zug, Switzerland, its German managing director Matthias Warnig and four other employees, were in the "national interest" of the U.S. Explanation: Such sanctions negatively affected "U.S. relations with Germany, the EU and other European allies and partners."

After Biden's concession, it is now Merkel's turn. Germany welcomed Biden's election victory, and even more so, Donald Trump's defeat. In Berlin, there was sometimes a naive attitude that everything would be fine with Biden. The truth is, the new president consistently opposes Nord Stream 2, and the Democratic Party is considerably more critical of the Kremlin than the Republicans are — something Berlin may not be ready to hear. 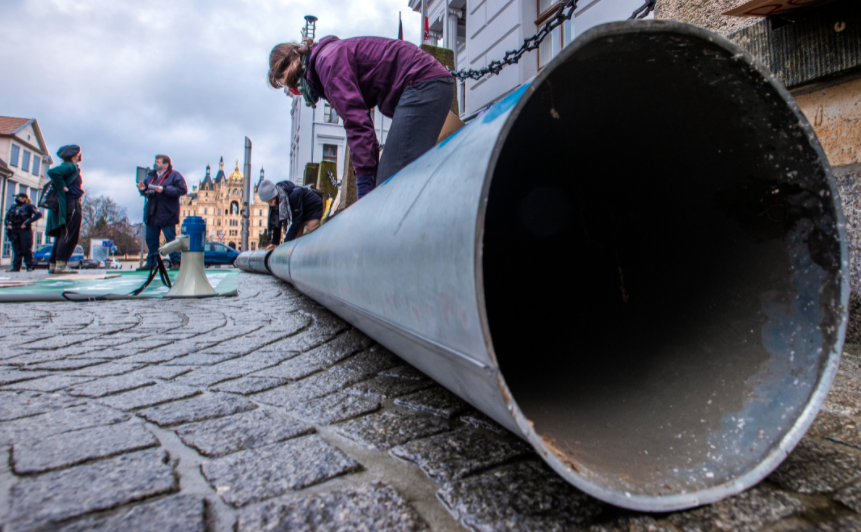 Germany has yet to take a single clear step towards Biden, despite the fact that the U.S. president rules with a wafer-thin majority in Congress. Even after Biden took office, Berlin gave the impression for months that they were not talking to each other. This should be different now that the pandemic can no longer serve as an excuse.

Nobody expects the U.S to suddenly give up its criticism of Nord Stream 2. The cross-party resistance is too great for that. Likewise, no one expects Merkel and her advisors to drop the pipeline project. Neither the annexation of Crimea nor the long simmering conflict on the border with Ukraine or the poisoning of Alexei Navalny have led to a rethink in the Berlin coalition. The Kremlin-critical Greens are exerting pressure, but they are still in opposition for at least four more months before the elections to choose Merkel's successor.

Merkel and company are most likely going to attempt a barter deal, which can be a face-saving solution for both Berlin and Washington. There is goodwill on both sides — a crucial difference from the times when Trump still ruled the White House and the National Security Advisor was a hawk named John Bolton.

The top priority is not the desire to change the Kremlin's actions, but the unity of the allies.

Biden's renunciation of the sanctions pushed by Trump is more than a signal to Russia, in addition to the cooling down of the relationship between Washington and Moscow. Biden will meet his Russian counterpart Vladimir Putin in Geneva on June 16, following his visits to the G7, NATO and the EU. These talks are expected to be about Moscow's renewed attempt to interfere in the U.S. elections, cyberattacks, the escalation on the border with Ukraine and the conduct of Belarus. Perhaps a good time for the two presidents to also bring up Nord Stream 2.

The controversial gas pipeline may have been on Joe Biden and his Secretary of State Blinken's agenda for a long time. For Blinken, it is, in a sense, a familiar topic: His first book, based on his bachelor's thesis, is titled Ally Versus Ally: America, Europe, and the Siberian Pipeline Crisis. The book deals with the construction of a Soviet gas pipeline to the West in the 1980s — and Blinken was just 25 when it was published, back in 1987. At the time, President Ronald Reagan's United States feared the pipeline would make Europe dependent on Moscow. France and German Chancellor Helmut Schmidt rejected this.

In his book, Blinken criticizes Reagan's policy of maximum pressure, and accuses Europeans of "wishful thinking," believing that the Kremlin can be persuaded to make positive changes with more economic relations. The future secretary of State's core thesis, however, was that U.S. policy towards the Soviet Union is less important than U.S. policy towards European allies. The top priority is not the desire to change the Kremlin's actions, but the unity of the allies. Let's hope the German diplomats have been studying Blinken's book on their recent travels.

The Openly Gay Priest Shaking Up The Catholic Church In Germany

Holger Allmenroeder is a Catholic priest who is also openly gay. He supports gay and lesbian peop...