Berlin To Beijing: The Double Meaning Of Merkel's China Policy

The German chancellor is the driving force behind a controversial investment agreement between China and EU, which is recognizing Beijing's true intentions too late.

The year is 2012. Angela Merkel sits on an ornate, high-backed chair in the Great Hall of the People in Beijing. Opposite her is someone who until now has been almost unknown in Europe, a man by the name of Xi Jinping. Merkel spends half an hour talking with the politician who is soon to be the most powerful figure in China.

At that time, Germany's dealings with China were going well. Since coming to power in 2005, Merkel had visited the country almost every year, watching its rise to superpower status. She had experience working with the country's leadership, having met President Hu Jintao and Prime Minister Wen Jiabao on multiple occasions.

The German chancellor had a particularly good relationship with Wen, and opened the Hanover Trade Fair with him in 2012. What she didn't know at the time was that the era of conciliatory relations overseen by Hu and Wen was coming to an end. Xi's ascent announced the return of an older type of Chinese politician: an emperor who exercised absolute power, both within the country and internationally.

At that meeting in the Great Hall of the People, Xi was still an unknown quantity, however. And many international onlookers, including in Europe, hoped he would usher in an era of greater openness.

In 2013, the EU entered into negotiations with China about a new trade deal, designed to open China up to European investment and ensure that European companies received fairer treatment in China. It was an attractive idea: Even now, despite interference from Beijing, despite widespread theft of intellectual property, China is a highly attractive market. How much more so if we could do fair, free trade with it in the future?

This dream of a lucrative future blinded Merkel to the present. But there were already reasons to be skeptical. In his first year in power, Xi launched the Belt and Road initiative, also known as the New Silk Road.

The aim was to create a giant trade network linking Asia, Europe and Africa over land and sea. One part of the project made the EU sit up and listen: the 17+1 Initiative, where China set its sights on European countries, including 12 in the EU. Targeting poorer countries in the region, Beijing aimed to bring them under its wing through billions of euros of infrastructure investment. 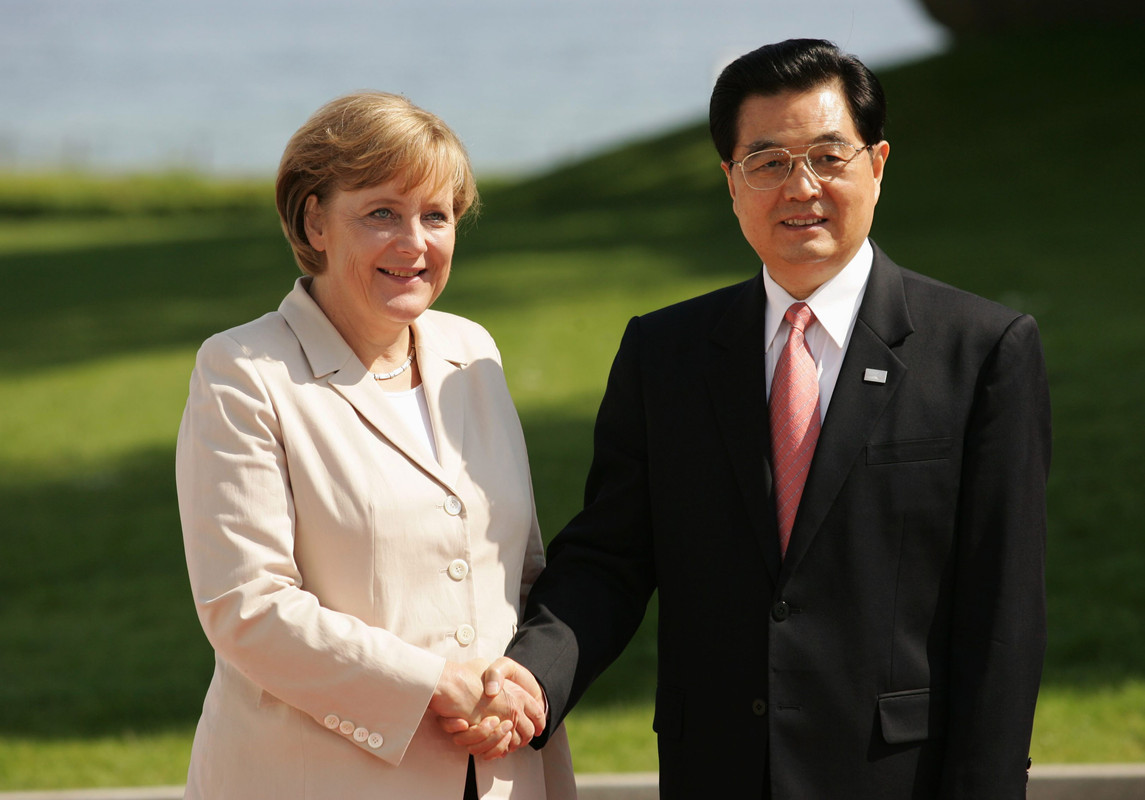 The initiative was an attempt to divide Europe, and little by little, the EU — and Angela Merkel — began to recognize this. When she visited Beijing in 2015, she noted that China was creating "groups" within the EU. "I just want to say that you can also deal with the EU as a whole," she said.

It was a subtle admonishment, no more than that. The EU continued to negotiate the investment deal, while China's influence continued to grow in Eastern Europe, from Tallinn in the North to Athens in the South.

Towards the middle of the decade, Xi's intentions were no longer in doubt. He ruled like an emperor, with absolute power, pursuing a nationalist agenda domestically and an imperialistic one on the world stage. But he had hidden this well for many years, and it took Brussels and Berlin time to see through him.

In 2015 Beijing announced the economic plan Made in China 2025, which aimed to establish the country as a leader in cutting-edge industries and technology. Berlin and Brussels began to fear that European companies would be left out in the cold.

2017 was another turning point, when the Communist Party conference showed that the cult of personality around Xi was now on a level with that of Mao Tse-tung. China was taking a step backwards, rather than opening up. Within the country there were crackdowns on freedom of expression.

In the meantime, Beijing still tried to put on a good face abroad. "China's aim is not to export the Communist one-party state to the EU," said a high-ranking EU diplomat. "What Beijing wants is stable markets, and open doors for trade to improve its own citizens' quality of life." Its aim was apparently a "China-friendly Europe."

Slowly though it dawned on the Europeans that their strategy of "change through trade" was naive, and they began to take action. In December 2017, new trade rules came into force against subsidized imports from China. And in the spring of 2019, the EU published a strategy paper in which China was referred to not only as a partner and competitor, but for the first time as a "systemic rival."

Still, many Europeans clung to their illusions, and nothing really changed. Europe wanted to keep the investment deal alive at all costs, particularly Germany, as its car industry has especially strong links with China. When talking about China, the word "rival" never passed Merkel's lips.

2019 saw Merkel's last visit to China before the coronavirus hit. She criticized Beijing's actions in Hong Kong and its treatment of the Uyghur minority in Xinjiang. And yet, the chancellor was still trying to breathe life back into the investment deal, which had been languishing for years.

Over the following months, she quietly put together an agreement with Xi behind the scenes, in close cooperation with her ally in Brussels, President of the European Commission Ursula von der Leyen. And last year, politicians worked through Christmas to get the deal finished. Merkel made it clear that once Germany's presidency of the Council of the European Union came to an end on Dec. 31, there would be no further movement.

At the last second, one day before the end of 2020, the EU and China announced an "agreement in principle" over the investment deal. It made a bad impression, looking like a reward for China disregarding the international community over Hong Kong and human rights violations against the Uyghurs.

The agreement was a blow for the incoming U.S. president. Joe Biden wanted to work together with the EU in taking a stricter approach to China. Although the agreement's content in terms of investment protection and joint ventures was miles behind what the Europeans had hoped for, Merkel still believed it was the right thing to do. For her, one thing counted above all: China was the EU's most important trade partner.

"That was a turning point. In Anchorage, Beijing made a clear statement to the West: We won't let you dictate to us. We abide by our own rules," says Reinhard Bütikofer (Green Party), chair of the European Parliament's delegation for relations with China. Shortly afterwards it all blew up. 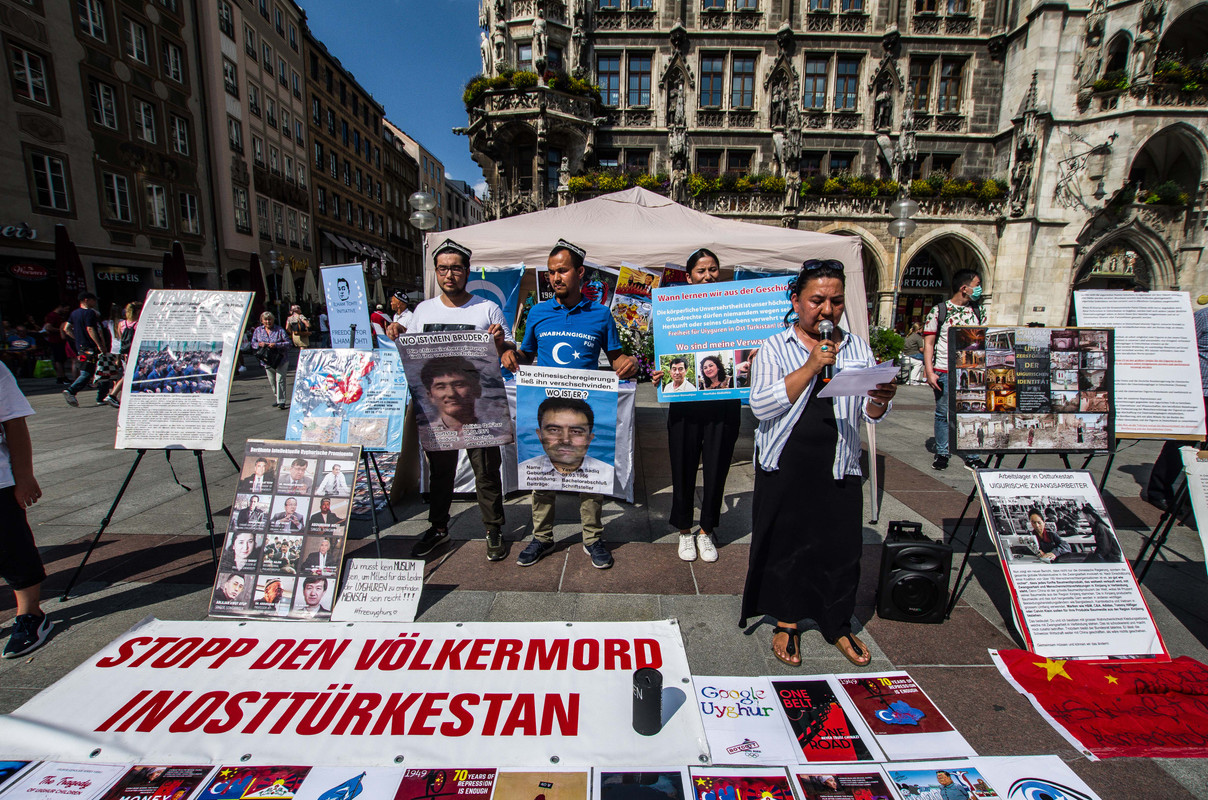 For the first time in 30 years, the EU imposed sanctions against four Chinese officials due to human rights violations. In practice, however, these sanctions were toothless. Unlike the American version, Europe's sanctions list didn't include the powerful and apparently brutal Communist Party chief in the Uyghur province of Xinjiang. The German Chancellor's office intervened in Brussels and argued for more lenient measures.

But Beijing was enraged, and in retaliation, issued sanctions against 14 European individuals and institutions, including many EU officials. In the meantime, the European Parliament still needed to ratify the investment deal.

On April 29, party leaders in the European Parliament discussed how to proceed, and there was a heated discussion. "The officials who are subject to sanctions are our heroes," said Manfred Weber, leader of the largest party in the European Parliament. With the exception of the Left Party, all parties agreed to keep the investment deal off the agenda for the foreseeable future.

In early May, at a meeting in London, the foreign ministers of the G7 states issued a statement. It was a day of reckoning for China, the opposite of Beijing's demands in Anchorage that the West stay out of Chinese politics. The foreign ministers demanded a UN inspection of the Uyghur camps and called for Beijing to "participate constructively in the rules-based international system."

And the German chancellor? She is still fighting for the investment deal. This week, "despite all the difficulties," she described the investment deal "that will now surely be ratified" as "a very important undertaking." As Michael Roth (SPD), minister of state for Europe at the German Federal Foreign Office, explains: "Overall, the German government still supports the agreement."

A window of opportunity is closing for China.

Nevertheless, there is still a long way to go to get it ratified, and it's clear that nerves are frayed. "China has taken a much tougher line and in the shadow of the coronavirus crisis it has pushed its global agenda forward," says Roth. He says the EU must act decisively to protect its interests. "This will decide what place the EU occupies long-term on the world stage." Roth further explains there is no need for additional sanctions at the moment, but they are keeping their options open if further steps are necessary to protect human rights.

With Germany's elections coming up in September, a window of opportunity is closing for China. "Angela Merkel is currently Beijing's biggest supporter in Europe," says Bütikofer. Many in Brussels agree. She is seen as one of China's protectors, along with French President Emmanuel Macron, who she eventually persuaded to support the investment deal. But Macron is under pressure domestically. And within Germany the tide of opinion may be turning against Merkel's investment deal.

"I expect Germany's policy towards China to be more critical in future, regardless of who is in power," says Bütikofer.

Norbert Röttgen, chair of the Bundestag Foreign Affairs Committee, believes that Germany's election results won't change the fundamental conflict between China and the West. "China is a big, powerful country which challenges the world order," he says.

"Europe, the United States and other states that want to maintain order on the world stage through mutually agreed rules have to confront the Chinese strategy — of replacing these international rules with power and national interests," Röttgen adds.

This means that the investment deal with China must come with clear conditions, namely that the agreement can only be ratified if China withdraws sanctions against EU officials.

An unavoidable topic for President Joe Biden's first foreign trip is Germany's support for the ma...