The former USSR is wobbling again …

Thirty years after the collapse of the Communist empire, the political crises in Belarus and Kyrgyzstan, and the war in Nagorno-Karabakh between Armenia and Azerbaijan — all emerging in quick succession — are calling into question Russia's influence on the smaller former Soviet republics.

"Vladimir Putin's Kremlin does not like crowds of protesters, especially when, in Minsk or Bishkek, they question the legitimacy of power. This creates instability, which is the antithesis of what the president wants," worries one source close to the Kremlin.

A senior European diplomat in Moscow notes that Russia has gotten used to the role of arbitrator in the region, making all of the conflict very disturbing. "But we shouldn't underestimate the capacity of Putin, who hates taking action on the spot and under pressure, to play the perpetrator of war or peace," the source added.

In just three months, in its post-Soviet "garden" in Eastern Europe, Central Asia and the Caucasus, Moscow has been taken aback by events it did not see coming: political chaos in Kyrgyzstan, revolution in Belarus, war in Nagorno-Karabakh.

The "near abroad," an expression used by the Kremlin since the collapse of the USSR, has suddenly been thrown into turmoil. For Putin, allergic to disruptions that start to spiral out of control, it's a real source of trouble, particularly in the face of a political agenda that includes an upcoming change of government and constitutional referendum to solidify his rule. 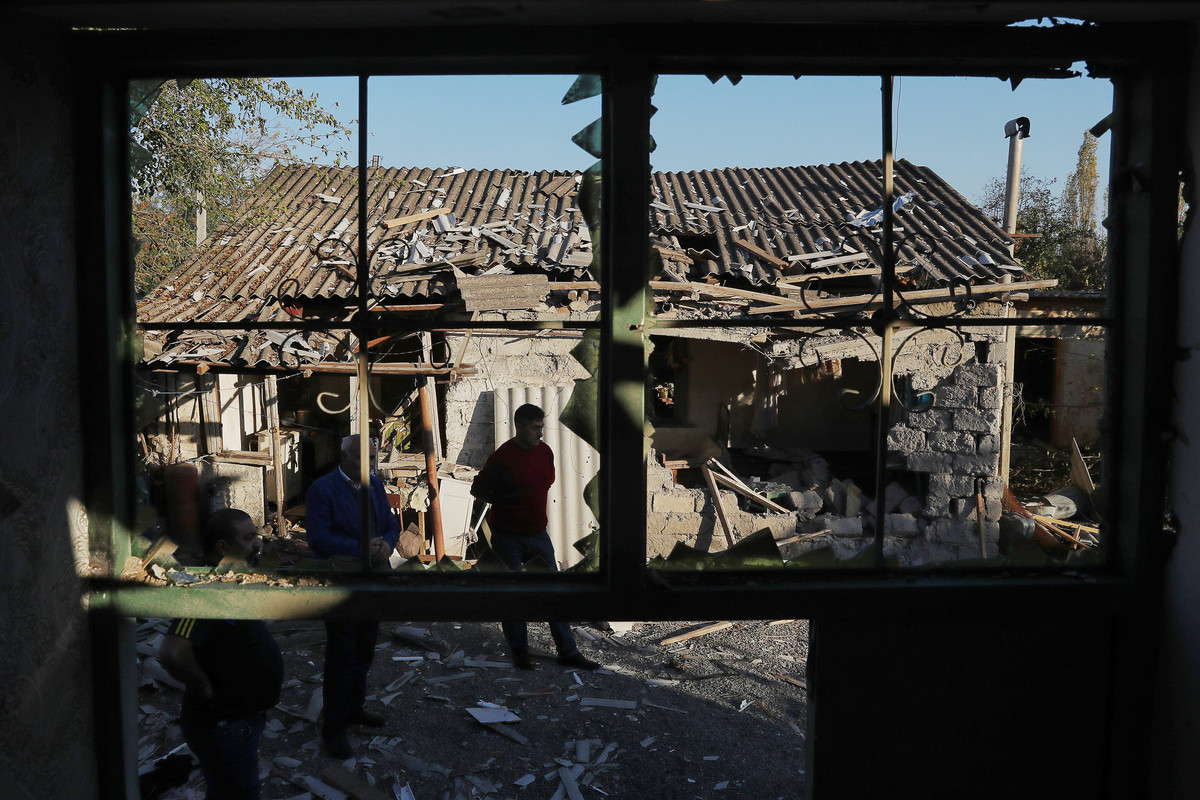 A house destroyed during a shelling attack in the village of Yukhary Garadagly during the Nagorno-Karabakh conflict — Photo: Valery Sharifulin/TASS/ZUMA

In each of these neighboring countries, the cause of the disruptions is first and foremost national: the anger in Bishkek is directed against authoritarianism and corruption of the elites, which is exacerbated by long-simmering tensions between clans; the exasperation in Minsk targets a president who, for a quarter of a century, has clung to power; and Armenians and Azerbaijanis face each other in the territorial conflict in Nagorno-Karabakh with suspicions that their Turkish neighbor is taking advantage of it.

In none of these cases is Russia itself targeted. It's not a push for independence against Moscow, as in the early 1990s. These aren't anti-Russian movements like the revolutions of the 2000s in Georgia and then in Ukraine, with which Moscow has since faced toxic relations.

In Kyrgyzstan, a small and poor country in Central Asia, a democratic but unstable "nugget" in the middle of a region dominated by authoritarian regimes, Russia seems powerless. Situated 3,000 km from the Kremlin, on the borders of the political-economic union that Russia launched from Kazakhstan to Belarus, power is divided more than ever.

In the opposition, two sides and two prime ministers are facing each other. The other power struggle is played out between the resigning president and his predecessor, who was arrested, released and then imprisoned in less than a week. The Kremlin was careful not to take sides. But, in the midst of the unrest, one of the men Russia supports managed to take control of the Kyrgyz security services. With one mission: to restore order.

The Kremlin fears a domino effect of popular protests.

In Belarus, on its western border with NATO and the European Union, Moscow is more involved. But Russia is struggling to find a plan B that would avoid embarrassing President Alexander Lukashenko, who's an essential ally, although not always obedient, or angering the demonstrators who have been calling for his resignation for two months. Putin apparently never abandoned his plan to merge the two countries. But this scenario, rejected by the majority of Belarusians, would pit them against Russians.

While the Kremlin fears a domino effect of popular protests from Minsk to Moscow, some hope that Lukashenko will accept the compromise of a constitutional reform — the first step towards a transition. A peaceful crisis exit scenario had already prevailed in Armenia with the emergence of a new ruling elite in 2018.

In Nagorno-Karabakh, the Kremlin seems unable to shape events in any way. After ten hours of negotiations, Russia did manage to gain a first ceasefire, reminding others that it hasn't lost its role as arbitrator. But, very quickly, the fighting resumed in the enclave between Azeri on one side and separatist forces, supported by Armenia, on the other.

In this war with Soviet origins (the annexation of Nagorno-Karabakh to Azerbaijan goes back to Stalin), Moscow was never able, in the past, to impose lasting peace. For a long time, Russia was suspected of arming both sides to fuel tensions and maintain its influence. Today, the country's promise of "substantial negotiations for a peaceful settlement" has yet to be carried out.

Russia wants to avoid a wider war, in which, according to its military commitments, it would have to defend Yerevan against Baku. A catastrophic scenario for Vladimir Putin who hates to be faced with a fait accompli — especially when it comes to his "near abroad."

Lockdowns, travel restrictions and the shift toward remote working have combined to cut global de...

French researchers have recovered a pair of viruses that were long frozen below the Siberian tund...