How A 'Refugee Town' Fell Victim To Italy's Populist Politics

Manifestation of solidarity to the mayor of Riace Mimmo Lucano on May 11, 2018 - Antonio Melita/Pacific Press via ZUMA

Fourteen months ago the progressive mayor of Riace, in Calabria, was arrested. Soon after, many of the refugees he'd help settle pulled up stakes and left.

RIACE — The blue plaque at the entrance of the pottery shop says "Home sweet home." It also seems to read Tsehayneshe's thoughts. This is where she belongs and plans to say, even if things aren't as they used to be.

"In Eritrea, my name means sun. Here in Riace, it feels like the sun's been gone for some time now," she says while hand-coloring a terracotta butterfly.

Staring at the deserted street outside the store, she remembers when everything began to change in the village, located in the Calabrian province of Locri. The turning point came in October 2018, soon after former mayor Domenico "Mimmo" Lucano was arrested on charges of favoring illegal immigration, embezzlement and abuse of office.

"So many people left, many friends," says Tsehayneshe. "Here the streets used to be noisy. Happiness was in the air and we used to dance. Now it's all over. But, you know, this is my home, and here I'll stay."

Tsehayneshe arrived in 2003 to the refugee town of Riace, which a year ago still boasted some 450 residents. But now Tsehayneshe is one of only about 40 people left. Together they represent somewhat of a resistance. 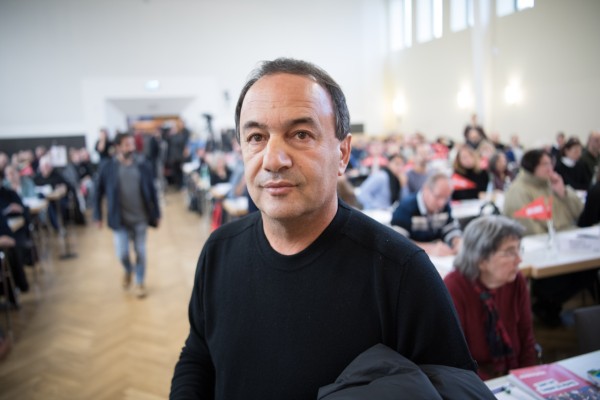 The few remaining families saw the migrant-friendly Riace model begin to crumble away, not unlike the rainbow colors scraped off the steps of the concrete amphitheater at the entrance of the village. Dozens of children of all origins used to play in front of this rainbow. Now, Riace's square is silent.

"My son and I will not go away," whispers Tsehayneshe, smiling.

Seen through her eyes, the end of the Riace resettlement project spearheaded by SPRAR, Italy's Protection System for Asylum Seekers and Refugees, was the beginning of a nightmare. It triggered the exodus of refugees and asylum seekers who had been living in Riace for years. Some found hospitality in other cities in southern Italy. Others left for Belgium, France and Germany.

But in the last few months, the situation again seems to have changed — for the better. Hope in Riace now carries the scent of freshly squeezed olives. Thanks to donations from the "It was the Wind" Foundation, a community olive oil mill has opened.

The hospitality policy helped to resurrect Riace, but the village risks dying out again

The money has also allowed the reopening of the artisanal workshops that were the cornerstone of former Mayor Lucano's utopia, a resettlement model to revive a progressively abandoned town that was celebrated by the director Wim Wenders and dozens of universities around the world.

In the textile workshop, Rafia Munir is finishing up a violet carpet. She used to be a teacher in the Northern Indian province of Kashmir, which she fled in 2014. For her, weaving is a return to her origins. "My grandparents produced carpets," she explains.

When the SPRAR resettlement project ended, she, her husband and two children found themselves in an apartment suddenly cut off from water and electricity. "[Mayor] Lucano found us a new home," she explains. "We wouldn't be here without his help."

Three weeks ago, they received official authorization to sell their wares to the few tourists who still pop into Riace. "Before it was different," Munir says. "Hundreds of people arrived every day, but now you see almost no one."

The Riace workshops provided jobs to native Italians, too. Inside the "Kites from Kabul" shop is Daniela Pisani, a 48-year-old from Rome who married a Calabrian. "The hospitality policy really helped to resurrect Riace, but the village risks dying out again," she explains. "The new mayor is dismantling what his predecessor did. It's a thumb in the nose not just to Mimmo Lucano, but to all Riace's inhabitants."

Pisani invokes the controversial removal of the plaque at the entrance of the village, which once read, "Riace, The Town of Hospitality." In its place now is a sign depicting the patron saints Cosmas and Damian.

The current mayor, Antonio Trifoli, elected six months ago by a council dominated by the far-right League party, defends his actions. "Here, there was never a division between those who were for or against a policy of welcoming refugees,"he says. "Former Mayor Lucano abandoned a part of the village, and he was punished for it at the ballot box. He also left the municipality in financial disarray."

It only takes walking the nine kilometers between the village itself and the marina to discover another Riace. Here, Mimmo Lucano was never popular. And the relief of the citizens at his ouster is evident. "We're much better off without illegal migrants," says Domenico Rullo, a 26-year-old construction worker.

He helped my family when I didn't have a red cent in my pocket.

"Lucano provided jobs only for migrants," he adds. "Under the new administration I've already had a few little jobs — this is how it should be, locals first. I'm with [Matteo] Salvini, and I'm not ashamed to say it."

This is the symbol of a village divided, ripped in two.

Lucano, meanwhile, returned from his court-ordered exile, after the Court of Appeal revoked the ban on his residing in Riace this past April. Now he must stand trial for allegedly facilitating illegal immigration and fraudulently awarding government contracts for waste collection services.

As he drives by, a girl sitting at the bar greets him. "He is my mayor!," she says. "Everyone makes mistakes. And even if the court finds him guilty, he's innocent to me. He helped my family when I didn't have a red cent in my pocket."

Lucano just returned from the United States, where he spoke about the Riace model at the Library of Congress. "Nobody will ever be able to take away the pride I feel for what we did, for showing the world what we were able to do for this little forgotten village," Lucano says.

He hasn't lost his will to continue the struggle. "I don't pretend to know the pace of justice, but being mayor of Riace is what has so far given me the most satisfaction. I wouldn't be opposed to doing it again. But first I have to understand what it is my people want."

At this, the girl at the bar, a spontaneous vox populi, sends up her cry once more: "This is my mayor!"

It was nearly nine years ago that Mario Draghi first burst onto the world stage. The ...