Quiet Killer: When Coronavirus Got Inside A Capuchin Convent

When there were 11: Capuchin Brothers from the Crest convent - Psylvia Martin via Facebook

No one knows how the coronavirus arrived in the historic convent nestled in the Drôme valley where elderly friars lived in close quarters. Today, jut six are left.

CREST — They're cut off from the rest of the world. Almost no one these days takes the path laced with forsythias and oleanders that leads to the Capuchin convent. At the foot of the high pebble walls strewn with curtains of ivy grow round boxwoods and rose bushes. Sitting to the west of the city of Crest in the Drôme valley of southeastern France, the sober facade of this 17th-century structure is plastered in gray with a single visible ornament: an immense wooden crucifix. Everything is covered in silence.

Under the vault in the neighboring chapel, a laminated encasing presents the names and pictures of the resident Capuchins. They include two friars from India, a chaplain to the nomadic Roma people, a hermit, the chaplain of a psychiatric hospital and an ex-missionary who served in Chad ... Three weeks ago, eleven portraits looked out from behind the laminated case. Now, there are only six. The photos of brothers Pierre, Emmanuel, Armand, Marcel and a second named Pierre, recently lost to the COVID-19 pandemic, have been removed and placed in the chapel where the Capuchins pray five times a day.

No one knows how coronavirus got inside. Even before the first symptoms were diagnosed, the brothers had followed instructions, social distancing and disinfecting surfaces with bleach. It wasn't enough. One after the other — sometimes at virtually the same time — they fell ill. Some recovered; others didn't.

Emmanuel Fabre, 94 years old, was the first to succumb on March 25. Ordained as a priest on March 10, 1951, this native of nearby Taulignan had spent 15 years in the Crest convent, which welcomes elderly friar. Brother Emmanuel didn't share much with his fellow friars, but was a solid, pragmatic man with a white goatee and small round glasses that made him look a bit like an Amish. He had flourished during his pastoral life in the central French city of Clermont-Ferrand, as well as in Angers in the northwest. "He was always up for a mission," recalls Brother Lucas, the "guardian," or manager, of the convent.

In the final days, Emmanuel stopped leaving his room, even with his cane. On March 25, Brother Hubert brought him some soup at 7:45 pm. He ate it. But when the friar came back to collect the tray, it was already over. Emmanuel died in his room just before nightfall.

The convent, home to Capuchins since 1608, is the oldest of the orders. Built around the cloister, its members are called to live in a spirit of radical poverty, in the image of Saint Francis of Assisi. Throughout their history, the Capuchins — known for their pointed hoods and the cord that belts their robes — have stood out in major catastrophes for their readiness to help fellow citizens. They were the first firefighters in Paris, as Louis XIV entrusted them to extinguish fires with iron buckets. When a plague decimated a third of Crest's population in 1628, the brothers of the convent continued visiting the sick.

Now, the cook and domestic aid who had long helped the friars are no longer able to visit the convent, replaced by four nurses who visit twice a day. The rest of the time, including at night, the Capuchins fend for themselves.

The small "commando" of impromptu caregivers is led by Brother Hubert, 64. In normal times, this former nurse lives in Tiaret, Algeria on the high Oran plateau. In France to visit friends, he was ready to leave for the other side of the Mediterranean when France's nationwide quarantine was announced. Then, the brothers of Crest called for help. "I was happy to put on the nurse uniform that I had hung up," says Hubert Le Bouquin.

These past few weeks, the convent seems more like a rural hospital. The brothers run from cell to cell, hurried and busy. They pass by each other in the hallways, arms full of supplies, exchanging nods and supportive words: "Be careful," "Go rest; I'll take over." No complaints, no anger. "We're just ordinary men placed in an extraordinary situation," Brother Hubert says. After Emmanuel's death, Armand and Pierre were transferred to a local hospital. Pierre Mazoué died on March 28, on his 85th birthday. In the 1960s, this man, described by his brothers as a real working-class Parisian, was impressed by social Catholicism and the prêtres ouvriers ("worker priests") movement which, at the time, was booming in the French Catholic Church. The son of a railway worker, he was a postman in a northern French suburb before living in social housing alongside migrant workers in Lyon. The head of French Capuchins, Erid Bidot, who lived alongside Pierre in Istanbul, recalls that the friar "wasn't afraid of anything." His death created a void in the group. A vibrant, funny man, he loved sharing his memories of his time as a nurse in Algeria, where his lifelong passion for the study of Islam began.

On the morning of March 28, the brothers were reading the daily gospel. In the story, Martha, who had just lost her brother, tells Jesus that if he had been present, her brother would not have died. Jesus replies, "I am the resurrection, and the life: he that believeth in me, though he were dead, yet shall he live: And whosoever liveth and believeth in me shall never die." At that exact moment, the telephone rang. It was the Crest hospital, announcing Pierre's death.

It feels a bit like my family has gone.

Then, there was Armand Donou. The locals of Crest who came for mass called him "the long-haired brother," and his photograph showed the soft, serious eyes of a lost child. Brother Hubert once told him to cut his hair, and Armand replied with a smile, "You know I'm a loser — this is the only way I could find to be like Jesus."

Brother Armand died at 78 years old, on March 29, 24 hours after Pierre. In the convent, this Brittany native born to a family of farmers was the "porter." He welcomed visitors and answered the phone. He also maintained the lodgings for the homeless, referring to them as "pilgrims." Discrete and solitary, Armand had a melancholy air that sometimes veiled his gaze was rooted in a painful experience in Ethiopia, where he was a missionary during the famine of the 1980s.

"He was forbidden from distributing food," explains Hubert. "He watched people starve to death and couldn't do anything about it. It marked him forever, gave him a permanent fragility." Until the very end, Brother Armand followed the news about forgotten conflicts, and always prayed for peace.

Pierre and Armand were buried together on April 1, in the Crest cemetery. Then, it was Marcel Connault's turn. At 99, the elder of the convent and an ex-missionary was very shaken by the death of two of the brothers, whom he had trained at the very beginning of their religious lives more than 50 years ago.

A "gentle" and "good" man according to the worshippers who confessed to him every Friday afternoon, Marcel loved to spend hours in the garden, in his blue apron and rubber boots, shaded by fruit trees. He kept melon and squash seeds, dried them on a sheet of paper and planted them in little pots neatly lined up in his greenhouse. 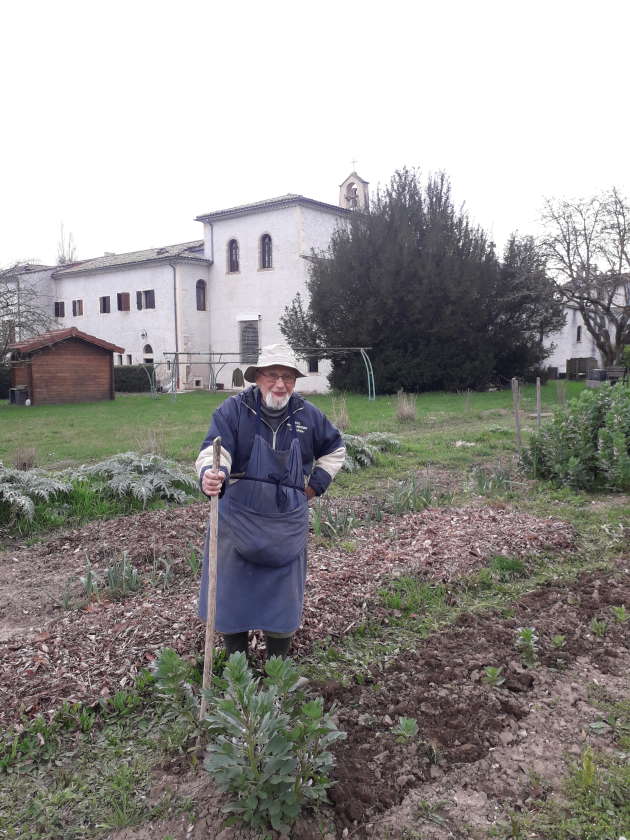 On April 3, Brother Hubert helped Marcel get dressed for mass, but the older friar asked to carry out communion in his room. By the morning's end, the friar-nurse found the the old man's eyes had closed. Hubert sat next to his bed, and told him: "You can go peacefully if it's time, Marcel. Or you can stay with us a bit if you'd like."

Hubert called in the nurse Sylvie and the other brothers. Forming a circle around their dean, they took their turns saying goodbye, reciting the Lord's prayer and singing the Song of Mary. At noon, Marcel was gone, in Sylvie's arms.

Finallly, on April 10, two days before Easter, Pierre Domergue, the artistic soul of the convent, who sang and composed music, departed at 85 years old.

Says Hubert, "When everything is over, we'll have a big celebration in memory of our brothers."

Earlier this month, the city and the region's health agency raised the possibility of removing the remaining brothers from the convent, but decided against it. The hardiest Capuchins — who hadn't been tested — had already resisted the virus. The surviving brothers remain confined in their convent.

Inhabitants of Crest like Arlette Maillet learned about the deaths of Emmanuel, Armand, Marcel and the two Pierres from afar. "First one, then two, then three, four, five … It feels a bit like my family is gone," mourns the retired caregiver, who has worshipped at the convent for 20 years. "Their stories deserve to be known."