For the coming weeks, Worldcrunch will be delivering daily updates on the coronavirus pandemic from the best, most trusted international news sources — regardless of language or geography. To receive the daily Coronavirus Global Brief in your inbox, sign up here.

"As we gather here today …"

Taken from the Christian liturgy, the line rings true for believers around the world of nearly every religion. Some form of gathering, communing, sharing are a central part of the worshippers' relation to the divine, a materialization and anchoring of their faith within a congregation, in good and bad times alike.

What to do then, when COVID-19 and its quarantine restrictions make finding solace together impossible? How will the faith of solitary congregants hold up in the face of an almost biblical plague?

We've seen how coronavirus-led bans on large gatherings have derailed religious rites across creeds: from an eerily deserted Kaaba in Mecca to the Pope conducting his Easter mass in a near empty St. Peter's Basilica, closed synagogues and Hindu temples refusing entry to devotees. And though some stubborn Catholic priests in France and American evangelical pastors defied restrictions this past weekend for Easter, for the time being religion is something that must take place at home, away from fellow devotees.

Some might see the current confinement measures as an opportunity to focus on their personal relationship to the divine. Some may even, as French Protestant weekly Réforme suggests, try their hand at their own, homemade version of rites. Others will simply lose faith.

But the twist to this current historical moment is that many men and women of faith will in fact let reason and scientific facts lead the way. It reverses a time-honored dichotomy between science and religion, where contrary to previous comparable catastrophes — like say, the Plague in 14th-century Europe — we don't see the outbreak as some sort of divine retribution for our sins. Thus obeying government restrictions, be they an obstacle to the due practice of our rites and rituals, is not blasphemy. Scientific proof is no longer irreconcilable with the tenets of one's faith and the population's health is a bonafide case of force majeure.

Better, still — there may be something in it for both science and religion, notes a recent Foreign Policy article entitled "Thou Shalt Practice Social Distancing." Religious leaders opting for an enlightened approach to the pandemic can extol the virtues of "following all the rational requirements of science, while offering faith as a source of hope and inspiration — not as a substitute, but a supplement to reason." And let us say: Amen — and go wash our hands.

• Toll: Global cases of coronavirus nears the milestone of 2 million.

• Race for vaccine: World Health Organisation says there are 70 vaccines in development, with three set to launch trials on humans.

• Trump power play: U.S. president Donald Trump claimed "total" authority on reopening the economy. Governors from both parties were quick to note they have primary responsibility for ensuring public safety in their states.

• Time to vote: South Korea votes in first national election of coronavirus era, with President Moon Jae-in's party expected to get a boost for his handling of crisis. 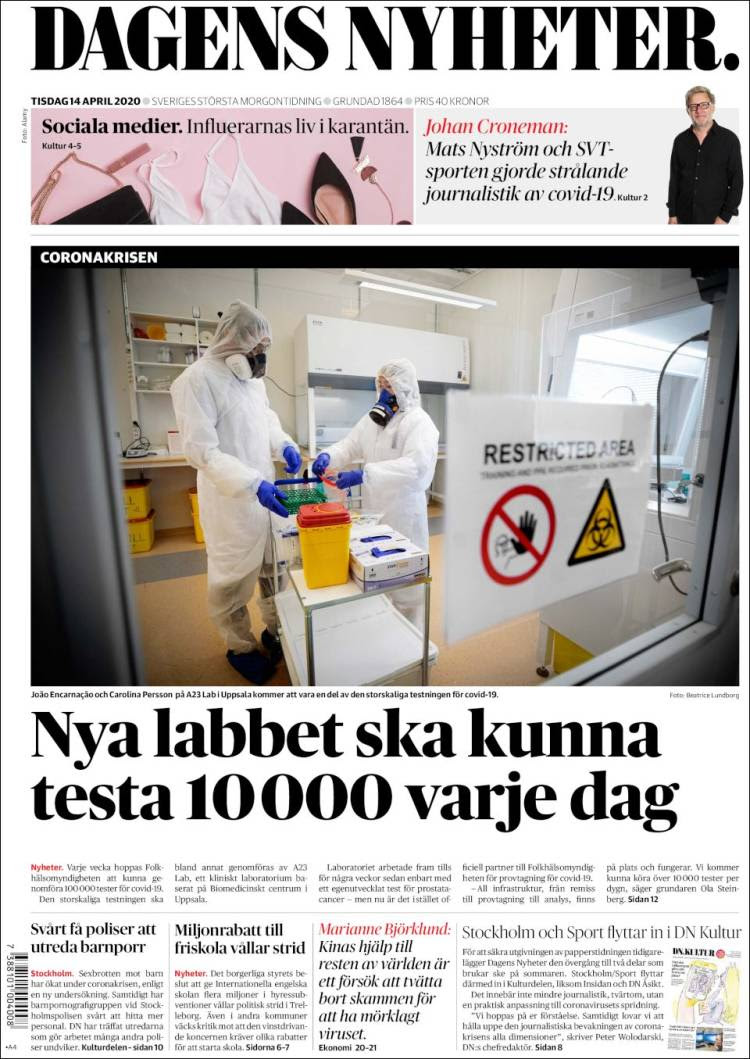 SUMMER VACATION PLANS? After Spring break and Easter holidays were largely canceled amid lockdown measures and travel bans around the world, should we now also worry about our summer vacations? EU Commission President Ursula von der Leyen advised against making plans for the summer, telling Germany daily Bild "no one can make reliable forecasts for July and August at the moment". Across the Atlantic, top U.S. health official, Dr Anthony Fauci said on CBS summer travel "can be in the cards" but only if the country manages to prevent a second wave of infections. Here are a few potential summer snapshots:

• Stay close: French cabinet minister Elisabeth Borne said last week: "Now is not the time to buy a ticket to go to the other side of the planet (...) But we can encourage French people to enjoy our beautiful country for the next holidays, which will also help the tourism industry." Australia and Italy are also encouraging people to plan domestic holidays, as the ban on international travel could remain until 2021.

• Borders shut: For those looking to travel abroad (maybe you bought tickets months ago?), some countries might not allow tourists to enter at all. According to ABC, Spain, one of the worst-hit countries, is thinking about closing its borders this summer to prevent a second wave, despite the fact that the tourism sector makes up 12% of the country's GDP.

• Grounded: EasyJet's fleet has been grounded to a halt for two weeks in the UK while Air France expects more than 90% of its capacity to remain suspended at least until the end of May. CEO of consulting firm Protourisme Didier Arino told Le Figaro that there will be few airplanes in the sky this summer, as "companies are planning to use only 50% of their capacity, for 5 months." In the U.S., the CDC has extended the No Sail Order for cruise ships carrying more than 250 passengers, for at least until mid-July.

• Beach scene: Italy's Culture Minister Dario Franceschini was asked last week if people will be able to go to the beach. "Sure! Of course it depends on how well we follow the (quarantine) measures now," he was quoted in Il Messaggero. "Then we'll let the scientists guide us on the right safety practices to deal with crowds." Italian news site Linkiesta interviewed Marco Beoni who runs the "La Giunca" beach club in Sabaudia, south of Rome, who expects sunbathers will be itching to get to the seaside. But Beoni plans to include fewer umbrellas to better regulate the space between beachgoers. "We are ready to use all systems of prevention: disinfecting tables, beach chairs, multiple times each day."

He cannot tolerate someone or something — in this case, the virus — occupying center stage in his place.

— from Andrej Mrevlje's: COVID-19 v. TRUMP-20: A Viral Battle For Our Attention

COVID AND PRISONS I. Turkey's parliament ratified a penal reform that paves the way for the liberation of an estimated 45,000 prisoners. The move comes in an effort to limit the spread of COVID-19 through the country's overcrowded prisons, but the law has been slammed by opposition critics, notably for its exclusion of those jailed on "terrorism" charges: As exiled Turkish journalist Can Dündar tweets, "jailed journalists, lawyers, human rights activists, opposition politicians will NOT be among those considered for early release." Turkey's prison system ranks among the most overcrowded in Europe, a situation worsened by the 2016 government crackdown that saw tens of thousands of opposition politicians and journalists jailed following a coup attempt.

COVID AND PRISONS II. Despite the release in Indonesia of more than 30,000 prisoners to slow coronavirus infection rates, a riot this weekend at Tuminting prison in North Sulawesi province erupted after rumors that a guard was infected. Overcrowding and uncertainty due to lack of medical resources make the Indonesian prison system a powder keg, with one Tuminting prison source telling Al Jazeera, "there are no testing kits so they can't confirm a thing."

COVID AND PRISONS III. "What if I never get to see my family again?," asks Kenneth Hogan, an inmate at Eastern New York correctional facility in a letter to The Guardian. With precautionary measures such as the suspension of outside visits, a grimmer than usual mood is setting in on the U.S. inmate population. Still, experts say that prison and jails are particularly ripe for propagation, like "petri dishes for coronavirus," for inmates and staff alike. In California for instance, CNN reports that the number of infections in the state's prison facilities grew by more than 700% in just over a week.

With creativity abounding and plenty of time to exercise it, the Internet is full of fun and safe challenges to help us keep in touch while not keeping in actual touch:

• The #pillowchallenge requires you to fashion an outfit using only a pillow and a belt.

• Meanwhile U.S. gymnast Simone Biles takes the handstand challenge to the next level.