The COVID-19 outbreak is a scourge like no other, but not because of the dangers that this particular pathogen presents.

BOGOTÁ — Why is there so much fear? Why the quarantines? Why are we treating this pandemic like it were the first in human history?

The fact is, progress has been a fillip to this panic. Viruses used to travel by horse or boat. They now fly by plane. Before, they would arrive in communities for which death was a reality. Now they have come to societies that have banished death, first from the home, then from the mind.

Humanity already suffered the plague of Justinian, the Black Death, cholera epidemics, smallpox and the Spanish flu. Still, there's a reason why this plague seems unprecedented, paralyzing the world like an extra-terrestrial invasion. People experienced previous pandemics with a sense of fatalism and the resignation they felt before plagues of all kinds — wars, crusades, conquerors, the devastating "discoveries" of continents. They were seen as a punishment, and inevitable.

Now, however, there is a slither of hope, and we know that not everyone who dies should have died. We believe many are dying not from a virus or fatality, but for lack of proper care. To put it another way, the last great pandemic — the Spanish Flu that killed some 40 million people — preceded the invention of ventilators.

While we have been trying to find artificial breathing systems since the days of Galen in antiquity and Paracelsus and Vesalius in the Renaissance, our present-day "steel lungs" were only invented in 1929, and perfected in 1951 through IPPV. It has only been 70 years (one lifetime, in the Biblical King David's view) since intensive care units, with their ventilators and monitors to aid respiration until a patient's recovery, have become standard across the world.

So, this is the first pandemic when many who would have swiftly died before could now be saved. So, why are there 1.5 billion cars around the world, poisoning the air our lungs need, but only 150 million, humble respirators that could save all the lives that are suddenly made fragile in a pandemic? That is where a natural phenomenon is aggravated to the point of becoming a nightmare, by a social system that cares more about business than caring for lives.

Yes, we are curbing your liberties. But it's to save your life.

We might have been saving more lives had health systems not become enormous, though exclusive businesses. In the United States, fear of becoming infected has often less to do with the fear of death than of a ruinous medical bill. There are no healthcare systems ready to confront a pandemic — not even one of a moderate scope like this one — because in normal times, governments consider these an extravagance and medical protocols are relaxed. That is why more people are dying in Spain, Italy and France than in Germany, whose cultural rigor brooks on negligence.

And that is where power comes into play. States have taken the opportunity to turn the health crisis into a matter of policing. And they conceal the shortage of hospitals and Intensive Care units for all. States have not treated people's panic at the prospect of not receiving care as relating to their own neglect of political duties, but as cases of social indiscipline to pin on those same individuals. Death was already proscribed. Now it is banned, and banned with police terminology though as often happens, anything banned tends to proliferate.

States, after all, never lose an opportunity to approach arbitrary and authoritarian rule. What a sight for their sore eyes, seeing the streets emptied of people, bereft of criminals, but also of revelers and especially protesters! For the controlling imagination, order is never as perfect as when it has an added instrument of intimidation.

Yes, we are curbing your liberties. But it's to save your life. Peasants are being forbidden from walking through the countryside as quarantine becomes an exaggerated tool of power. 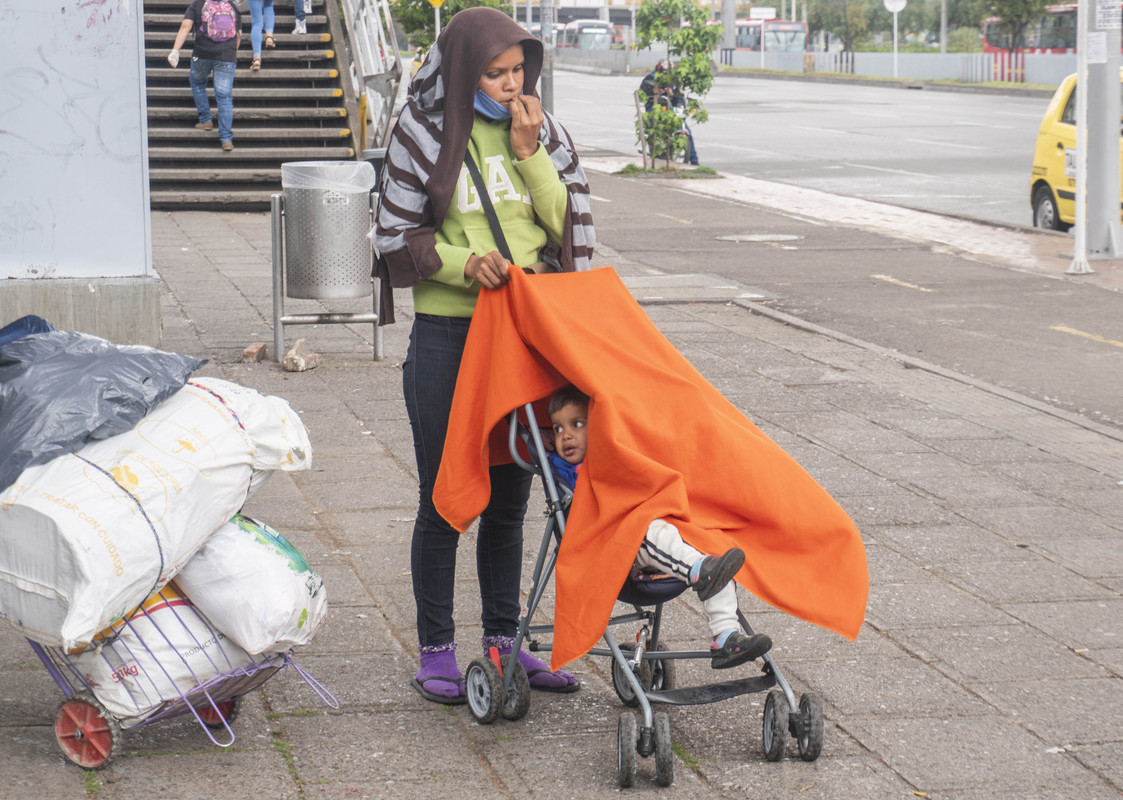 A Venezuelan woman stands with her child in the streets of Bogota — Photo: Daniel Garzon Herazo

They say they want to save our lives but if they were so concerned, there would not be so many people dying of hunger, and all the automobile deaths would have led to a ban on driving by now. Poverty would long ago have become the main concern of states, and needless to say, hospitals would have ventilators to spare and universal healthcare would be assured.

In a context of negligence, social helplessness and short sightedness, of course you need a quarantine to block the triumph of death. But what a golden opportunity too: to exercise, test and deepen the instruments of social control.

The background behind this episode is this: The virus is but a flash that gives you a glimpse of the storm and of hidden crises. If unemployment spikes within days, if families in precarious conditions need more payments, if a social explosion is around the corner, it is all because a ticking bomb lay beneath the world's apparent normality.

There are other components to this historic episode, and one is the drama of old age. Nobody wants to grow old, but societies are increasingly aging. The paradox is that living longer does not even mean living well, because a society that no longer believes in the past, in wisdom and experience, leaves the elderly without a place in the cultural order.

Finally, for a few days as pollution falls, the air and the seas have cleared, you can see dolphin again sliding in and out of the ocean, and foxes, raccoons and opossums, which usually hide. It all shows how ominous our presence is to other creatures. It's a reminder, as Spanish writer Álvaro Fernández Suárez put it, of "Man's terrible gaze."

Hands Off! Pandemic, Sin And Fears Of The Human Touch

Contagion fears and extreme attachment to the internet are reinforcing that most traditional of m...

No Mercy For Conquistadors, But We Can Let Their Statues Stand

Latin America can do a lot more to right history's wrongs than topple the bronze effigies of its ...