Why Argentina Should Stop Paying Its External Debts

There's a case to be made that at least some of what the country owes is "odious" and therefore illegitimate.

BUENOS AIRES — Almost all of our leaders — including President Alberto Fernández and his production minister, Matías Kulfas — agree that Argentina must honor its external debts. The government is planning to restructure them, of course, but restructuring implies recognizing the validity of the debt, even if payments are made in a different time frame than the one initially devised.

The argument used to defend the obligatory nature of repayment is always the same: The debt was contracted by a democratic government (in this case by Mauricio Macri and preceding administrations) and must therefore be honored. And yet, if we scrutinize this argument, we find that it is, at the very least, questionable.

First, democratic governments can also incur invalid debts if the loan is destined to ends incompatible with the public interest. For example, when an official steals money that began as a loan to the state, is it morally acceptable to offload that debt onto the public and make future generations responsible for it? This is even more evident if the lender had reasonable cause to suppose the theft might occur. Why should the population take responsibility for a decision taken in its name, but without its authorization?

The debt is not of the Argentine state but one taken on by the executive branch without due authorization.

This what's called an odious debt, and it can occur not just under dictatorial regimes — as Minister Kulfas mistakenly affirmed — but also in a democratic context. The key is whether the debt runs counter to public interests, regardless of the nature of the contracting government. It's about how the government uses the money, not which type of regime contracted it. This argument should be enough to obligate the new government to, at the very least, revise the origin of the debt it insists on repaying.

Second, discarding this argument, there are other reasons for doubting the moral legitimacy of debts. I'll categorize the first of these 'procedural' and the second 'substantive.' With procedural reasoning, certain decisions taken by democratic governments must first be authorized by parliament if they are to become binding for the state. This would be the case of contracting a public debt.

But in Argentina's case, at no point did parliament authorize the executive branch in the last administration to take on debt under the conditions in question, and certainly not for the amounts involved. Thus the debt contracted is not of the Argentine state as a state but one taken on by the executive branch, without due authorization, in the name of the State. The lenders could not claim they were ignorant of this fact since there is an established and well-known legal procedure for incurring debts. 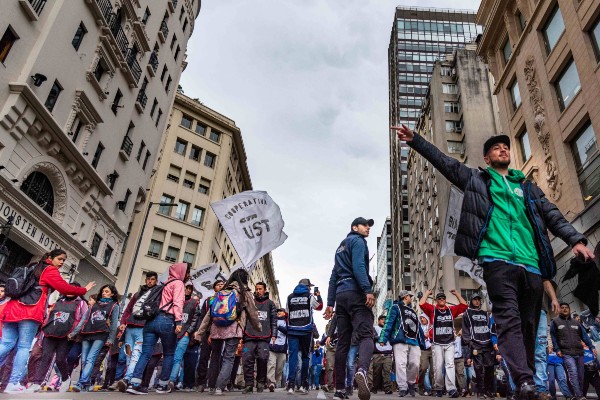 Something like this happened with our last government, which used the greater part of the IMF funds to pay off preceding debts to foreign creditors while placing the burden of their repayment on the Argentine people. It is thus no longer a matter of ratification: Ratifying that debt means ratifying an injustice.

We question the morality of our sovereign debt for affecting the population's most basic rights.

Separately, in the substantive argument, there are moral limits to debt repayment. So just as it is not acceptable to sell a close relative's body organs to pay off a debt (even with the relative's consent), it is not acceptable to repay a sovereign debt while sacrificing natural resources, national territory or the population's basic human rights.

If states reach a point where they must choose between defaulting with creditors or with their own people, we may conclude that they have become exceedingly over-indebted, and could no longer meet certain obligations without failing to honor others. In that case, the burden of proof is reversed. It is no longer states that must explain why they cannot honor their debts, but the lenders who must explain why they insist that over-indebted states keep meeting their obligations when it was evident from the outset that those states couldn't realistically handle the debt.

We can see then why the assertions of Fernández and his minister — that there can be no questioning the legitimacy of the debt they received — are dubious, to say the least. There are strong arguments to be made that, because of its origins, most of Argentina's foreign debt is odious (that is, non-binding). On top of that, there are also grounds to question the morality of our sovereign debt for not meeting a minimal level of procedural requirements, or for affecting the population's most basic rights and the state's integrity.

The government could use some or all of these arguments to defend the cancellation of debts in some cases, and reduction in others. Instead, it is starting with the assumption that all inherited debts are perfectly legitimate, and its negotiating strategy, as a result, is weak.

*Cristian Dimitriu has a PhD in philosophy from the University of Toronto.