WeChat Or Chinese Journalists: Who Is Doing China's Bidding Abroad?

Beginning last month, the U.S. Department of Homeland Security has tightened access to media visas for any journalist holding a Chinese passport. The validity period of each visa delivered will be shortened to 90 days, instead of being unlimited as before. Journalists who are citizens of Hong Kong or the Macao Special Administrative Region are not subject to this restriction.

Unfortunately, the Chinese reporters who will be harmed by this latest escalation are probably not those working for China's Communist Party mouthpieces, as the U.S. government had intended. In comparison with computer programmers, high-level managers or those with special technical talents, reporters do not possess additional merit when applying for an H1B visa to enable them work in journalism in America. Thus the main victim of this new policy is likely to be Chinese nationals working for foreign outlets that are not from China.

It didn't take long before the Trump Administration found out the full truth about Zhang and the President tweeted "to cut him off" from the White House.

However, the new tightening of media visa access intended to suppress China's state media outlets is ineffective on reporters such as Zhang since he is indeed a Taiwanese national.

This counterexample clearly demonstrated that China's state media can easily bypass the visa obstacle by employing people with U.S. citizenship or those not subject to the new restriction in order to continue to fuel their propaganda machine. 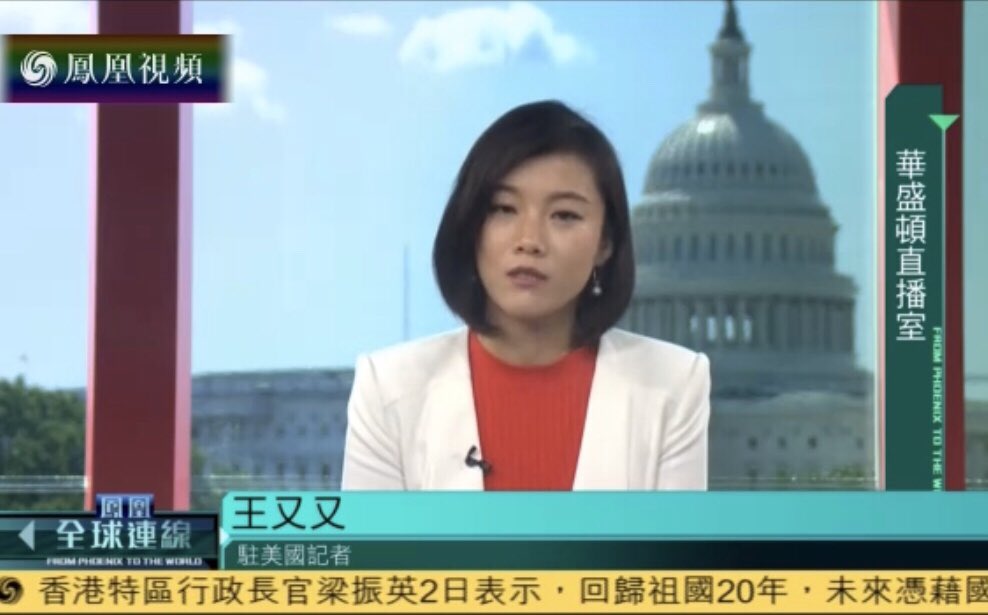 Youyou Wang, a reporter for 凤凰卫视, a TV station in Hong Kong backed by the Communist Party of China. — Photo: 心爱光明Xenia via Twitter.

This is, for instance, most obvious with China Global Television Network (CGTN), a group of six international multi-language broadcasters operated by the state-owned China Central Television (CCTV). Most reporters at CGTN are not Chinese nationals. Rachelle Akuffo, the Washington D.C.-based anchor for CGTN America is a British-Ghanaian. Sean Callebs, also working for CGTN America, is an American citizen who had worked for CNN for 20+ years.

But perhaps even more relevant is that the rise of social media has enlarged the scope of possibilities and space for China's propaganda agencies. Jerry Kowal, or Guo Jierui in Chinese, a native New Yorker in his twenties, and Nathan Rich, an American living in China, best known as the Hotpot King, are two examples of how Chinese state media make use of video clips in their favor from unlikely sources.

Recently, Jerry Kowal has made live videos, in cooperation with CCTV, about the COVID-19 situation in the U.S.. These video productions have been mainly shared on the heavily censored Chinese video-sharing websites, but also on YouTube.

Meanwhile, Rich, who has 470,000 subscribers on YouTube alone, and many more on equivalent Chinese video-sharing websites, has gained followers precisely thanks to his pro-China stance. In the presentation of his video blogs, he even stated frankly that he reserves the right to delete anti-China comments.

His videos, like those of Kowal, manage to be viewed within China where a strict internet firewall is imposed. Despite being exposed as having a criminal record of theft and drug-related crimes in the past, the Hotpot King is still a reference for Chinese official media, such as China Daily and Global Times, considered a "beachhead" against anti-China Western prejudice. To be fair, most of Kowal's video clips have nothing to do with political issues nor the on-going trade war between China and America. However, he has been subtly linked by China's propaganda machine through his recent videos about coronavirus in America.

Meanwhile, Nathan Rich's blogs are most often supportive of China's official discourse, such as his criticism of the Hong Kong protests or the recent clips around COVID-19 issues. In an interview with the Global Times, the Chinese Communist Party news outlet, he was shown to be a commentator who debunks anti-China bias.

The number of overseas WeChat users has multiplied.

Up to now, no country seems to have reacted adequately to social media apps coming from China, such as WeChat, a multi-purpose messaging, social media and mobile payment app developed by Tencent, which has become an important tool used by the Chinese government to influence domestic and foreign audiences.

As the number of Chinese people living or emigrating abroad increases, the number of overseas WeChat users has also multiplied, relying on it as their main source for information and social communication. From real estate agents to car insurance, and even house decoration and lawn mowing, WeChat has become a functional ‘yellow pages' that helps people who are unwilling or unable to use English to stay connected with the outside world.

Compared with WhatsApp or Telegram, one of the most important advantages WeChat possesses is that it has unimpeded passage through China's internet firewall. For Chinese living abroad, it has become essential for connecting with people in China. Tencent's first quarter report this year showed that the monthly number of active WeChat users is now more than 1.2 billion.

What comes along with this is the growing number of audiences who read content which has been through the monitoring and filtering of the Chinese authorities. When such content becomes the sole source of information for many people, it's bound to have an influence on them.

As one 2017 Columbia Journalism Review research paper showed, in the 2016 presidential election in the U.S., WeChat was regularly used by first-generation Chinese Americans, who largely supported Donald Trump. Indeed, it is the massive stream of Chinese-controlled social media that enters America through the borderless virtual world that represents a far bigger threat of foreign interference than any single journalist visiting from China.