Besides partially destroying a key nuclear installation, the suspected sabotage at the Natanz uranium enrichment facility is also exacerbating tensions within Iran's leadership ranks. Was that part of the purpose of the attack?

This week's explosion at Iran's Natanz nuclear facility is having repercussions in the capital, Tehran, starting with Alireza Zakani, a former Revolutionary Guards commander, who has sharply criticized domestic intelligence agencies, saying "a good part" of the country's uranium enrichment facilities "have been destroyed."

Iranian authorities suspect sabotage, and have called the explosion and subsequent blackout at the site a case of "nuclear terrorism," presumed to have been carried out by Israeli agents.

Zakani, who currently serves as head of the Iranian Parliament's research center, told a television interview on Monday that Iran had become a "paradise for spies" and that "spies are flourishing." He suggested that the explosion was a maneuver or "part of the Vienna negotiations" meant to bring Iran and Western powers back to the 2015 nuclear pact. The agreement sought until recently to control Iran's nuclear program.

While damage from the explosion is clearly considerable, it is not impossible for officials of the Islamic Republic to have exaggerated and lied about the real harm done to the centrifuges, as a distraction from the country's nuclear activities. Indeed, they may be giving false information hoping to obtain concessions from the West as an injured party — now that talking tough has not proven as useful ahead of talks.

Some Western and Israeli intelligence sources estimate that the explosions may halt Iran's nuclear operations for nine months or more.

Israeli and Western officials, including those of the Trump and Biden administrations in the United States, have reiterated that they will not tolerate Iran accessing nuclear weapons (which the regime denies it wants). And in recent years, talks on Iran's program have been ongoing, sometimes in secret, and either in direct or indirect form through third parties. These conversations have yielded concessions on both sides, and even produced agreements.

But at times where diplomacy proved fruitless or when Iran is considered to have crossed the world's security lines, Israel and the Western powers, either separately or in tacit cooperation, have acted against Iran's nuclear threat.

The West's "undiplomatic" interventions include collaborations in 2007 between Dutch, U.S. and Israeli spy services to launch a cyber-attack on the Natanz plant. An Iranian engineer may have helped in that case. There have been other acts of sabotage, along with the physical elimination of nuclear scientists or military figures.

Radical currents within the country are urging the government not to resume nuclear talks.

These blows have done more than physical harm. In each case, they have an impact as well on the regime's standing, often making a mockery of its political calculations and fanning discord among its nomenklatura, as the latest Natanz explosion is doing. And time again again, such attacks also underscore three basic foreign policy problems that the Islamic Republic of Iran faces.

One is whether or not to pursue nuclear talks. The second is pressures on the Revolutionary Guards for failing to safeguard nuclear installations. The third is concern about the presence of infiltrators at the highest levels of Iran's intelligence or security apparatus.

Social platform users have latched onto recent pictures of a bedridden spokesman for Iran's nuclear agency, Behruz Kamalvandi — who said he had fallen into a ventilation shaft — saying his pained face symbolized the state of the entire regime. In the meantime, radical currents within the country are urging the government not to resume nuclear talks. 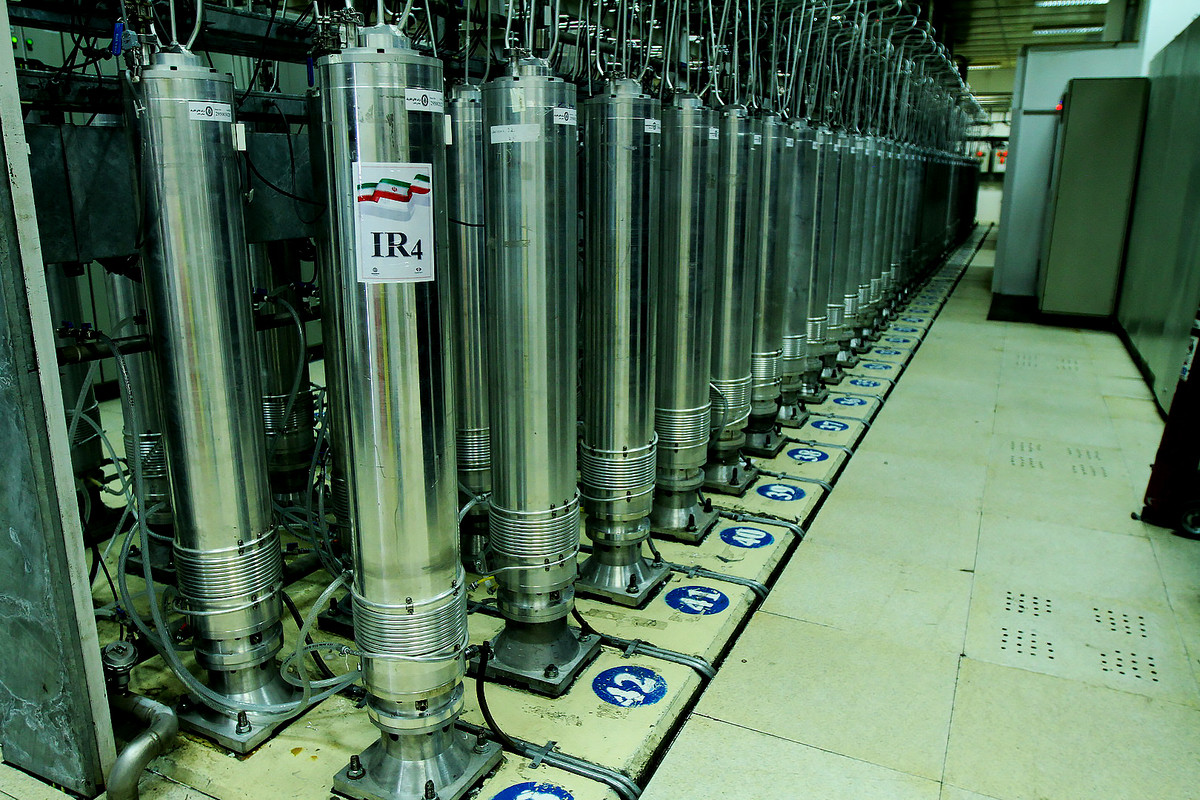 Inside the Natanz enrichment facility — Photo: Salampix/Abaca via ZUMA Press

The government and its reformist allies, for their part, say the explosion was just that: an attempt by Israel to derail talks and prevent the lifting of sanctions. They insist that walking out on talks would be to play into Prime Minister Benjamin Netanyahu's hands. The official IRNA agency called the explosion a "Zionist trap."

The legislator Ali Khazarian advised the government not to stake the regime's "dignity" on talks, while presidential adviser Hesameddin Ashna asked if it was right to "cut off the Vienna talks in response to the power cut at Natanz."

Hossein Shariatmadari, the editor of the conservative Tehran newspaper Kayhan (not associated with Kayhan London) has no doubts that "the Zionists" were behind the explosion. He wrote on April 13 that Israel "cannot possibly pursue its criminal plans without help from the American and European sides and the treachery of infiltrators." Resuming talks, he wrote, was to signal to the West that they could keep striking "without qualms or concerns!"

Foreign Minister Mohammad Javad Zarif stressed in Parliament on Monday that Iran would not suspend uranium enrichment. But whose orders do Zarif, his diplomats, parliament and the government obey? Can they sit and negotiate without permission from Supreme Leader Ali Khamenei?

The targeting of Iranian scientists and soldiers, elimination of Iran-backed militias, sabotage, and the sanctions imposed on Iran are just some of the West's weapons against Tehran. The regime has a choice of paths: It can submit and step back, or bolster its ballistic, regional and atomic threats or turn to hostage-taking, jeopardizing its existence.

The Javan newspaper in Tehran, a mouthpiece of the Revolutionary Guards, had its own take on the Natanz explosion, arguing in an editorial Wednesday that the "real harm" of the incident was to spark "disputes" inside the political class and hasten its downfall.

TEHRAN — An Iranian man who divorced his first wife over her "secretive" use of Instagram is ...

Sanctions have shrunk Islamic Iran's regional and nuclear ambitions, but it retains a trump card ...