Welcome to Wednesday, where vaccine rollouts have started in Ghana and Malaysia, but may be stopped in Lebanon because politicians keep cutting the line. Gérard Depardieu is under investigation in France and a freezing cold record is broken by a Czech swimmer.

• COVID-19 latest: Ghana receives the first shipment of vaccines thanks to UN-backed COVAX plan, and Malaysia starts its inoculation drive. In Lebanon COVAX's inoculation drive could be blocked over politicians skipping the vaccine line. Serbia, already second in Europe for the best vaccine rollout strategy, becomes the first country where citizens can choose the vaccine type.

• Myanmar coup protests: Police forces release 210 protestors even as night time police raids continue. In Yangon, demonstrations are being held for the 19th consecutive day. Myanmar's foreign minister has travelled to Thailand for the junta's first diplomatic talks since the military seized power.

• Gérard Depardieu accused of rape: The legendary French actor is under formal investigation for the alleged rape and sexual assault of a 22-year-old woman, according to the Paris prosecutor's office. Depardieu denies the accusations.

• Last Franco statue removed: The last standing statue of the former fascist Spanish dictator Francisco Franco was removed from the gates of Melilla, an autonomous Spanish enclave on the coast of northern Morocco.

• Tiger Woods car crash: The pro golf star has been hospitalized following a single-car crash in California. He has sustained non-life-threatening injuries but has significant leg fractures that required emergency surgery.

• Cold Czech break: Czech free-diver David Vencl swam nearly 81 metres (265.75 ft) beneath the ice to break the world record for the longest under ice swim. (Note: He stayed in just his speedo for the icy post-swim interviews.) 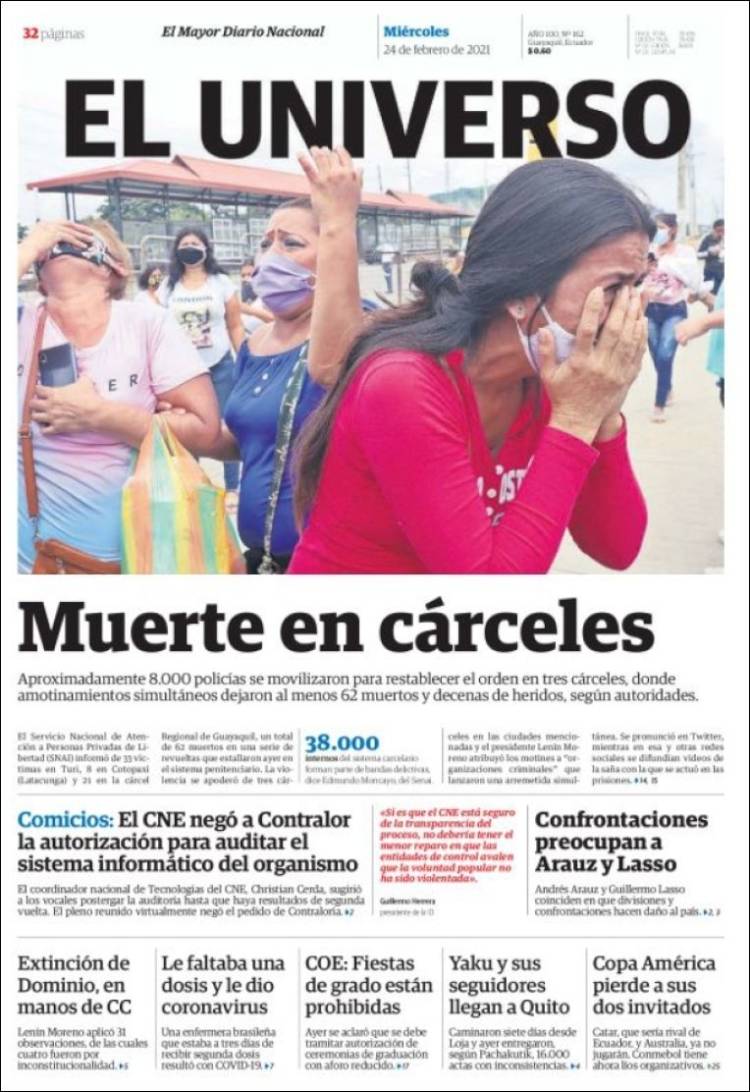 Long live leggings! Fashion in the time of Coronavirus

The pandemic has caused an overall drop in clothing sales. But is it also permanently changing the way we dress? asks Alexis Rodríguez-Rata in Spanish daily La Vanguardia.

The coronavirus pandemic is turning the fashion sector upside down — in the short, medium and long term. The pandemic is causing a drop in sales as people buy simpler, more casual clothes to wear at home, and when people are shopping for clothes, they're doing so online. But the changes go beyond just the numbers. For Hazel Clark, a specialist in fashion history at New York's Parsons School of Design, when it's all said and done, we'll look back at this period as one of historic change.

It is not the first time global events have prompted momentous changes in fashion. Transparent bags became popular in the 1980s after a proliferation of terrorist attacks. Jeans became popular after the Vietnam war and the protests of May 1968. Christian Dior's "new look" — with high heels, gloves and generous skirts — arrived after the Second World War, when textile rationing ended and, as the couturier said, there was a need for "happiness."

Clark says fashion may change in response to shock events, but a better way of looking at it would be to see it as a reflection of its time. The current debate is about comfort, practicality and functionality. Second-hand shops and online retailing are flourishing. Social networking sites set the tone. La Vanguardia's fashion correspondent Joana Bonet summed it up with a fact that is also an example: Loewe of Madrid has discontinued the tie, as there is little demand for them. There will be more such changes.

Drugs, weapons and... spring rolls? Add the Asian fried staple to the list of contraband items that have been seized in the illegal international smuggling market.

Police discovered 61.5 kilograms (136 lbs) of chicken spring rolls stashed in a car trunk during a control at a France-Switzerland border crossing on Feb. 16. The driver, a Vietnamese national, and the passenger, a French national, were returning to Switzerland where they own a restaurant. But they did not declare the rolls to the Swiss administration at Ferney-Voltaire.

The tasty snacks were concealed in the spare tire compartment, a common hiding place officials often check. The stash was destroyed as it did not comply with "conditions for the transport of food goods," and the restaurateurs also face fines for violating VAT and customs laws.

Donatella Del Vecchio, spokesperson for the Federal Customs Agency, told the Tribune de Genève that incidents of bringing delicacies into Switzerland aren't as rare as they may seem. Last month, an Italian was busted crossing into the Ticino enclave with 1,400 kg of assorted goodies: salami, mozzarella, olive oil, flour and canned tomatoes. That, folks, is known as pizza trafficking.

Japan has recorded a rise in suicides among women, as 6,976 took their lives last year — a nearly 15% increase compared with 2019 and the first year-over-year increase in more than a decade. Experts estimate that the COVID-19 pandemic has put more pressure on women, many of whom have lost their jobs or suffered from disparities in the division of housework and child care.

Every great poem fulfills a longing and puts life back together.

— One of the many memorable bits of prose (and poetry) from Lawrence Ferlinghetti, who died on Monday at the age of 101. The poet, publisher and owner of San Francisco's City Lights bookstore is considered the spiritual godfather of the late 1950s Beat movement.