The customs border between the UK and the EU is back, with new rules and regulations, an influx of hastily trained agents, and a technology overhaul.

CALAIS — In the cab of his lorry, Maciej desperately waits to leave the port of Calais, in northern France, to return to his homeland, Poland, where his shipment of chocolate is to be delivered.

"Today is a holiday in my country, so a miracle is required to get people to answer my questions and help me get back on the road as soon as possible," the driver says. He has gone through the Channel crossing many times, but this is the first time since the post-Brexit border was implemented.

Like him, dozens of trucks are stuck in an immense car park after they arrived from Dover, UK. In a cold and wet wind, they are waiting near the ferry landing for authorization to get back on the road — clearance they can only obtain once the operator whose goods they are transporting provides customs with all the necessary documents.

To avoid having all these trucks at a standstill — and be overwhelmed with a colossal amount of paperwork and endless traffic jams — French customs have devised what is called a smart border. The system is based on software that generates a barcode for each shipment, after the expeditors have filled a declaration form. This code, which is linked to the truck's license plate, is an identity card for the vehicles allowing them to avoid customs formalities.

The software analyzes the plates inside the ferry. Once they arrive at the port, drivers can see on a screen whether they must follow the green marking that will lead them to the exit or the orange marking that takes them to the customs parking lot for a physical inspection.

"For now, we rarely have to stop trucks," says Marc Declunder, head of the customs office at the port of Calais. "The smart border is working well."

At the end of the orange line is the first customs office. Through a thick window, Smaïl Hamouni, one of the customs officers, uses his rudimentary English to guide drivers who are annoyed at being halted.

The smart border is working well.

"We understand their frustrations since this is the first time they've been checked here. So we delay action and advise them to call their employer," he says.

Drivers who have trouble speaking English rely on their smartphone's online translator and put it against the glass to make themselves understood — a resourceful solution that is now commonplace. Every time a ferry arrives, this process starts all over again.

"Almost 80% of drivers cross the Channel several times a month, so next time they will already know how this works and they won't have to stop," says Benoît Rochet, deputy general manager of the port of Calais.

To carry out these post-Brexit controls, nearly 700 new customs officers have been recruited. Smaïl Hamouni arrived just a few days ago. After he passed the customs exam and followed a distance learning course last year at the National School of Customs in La Rochelle, he applied for one of the 63 customs jobs available in Calais.

"We mostly check that the documents appear on the software and we intervene when problems emerge during the inspections," he says. 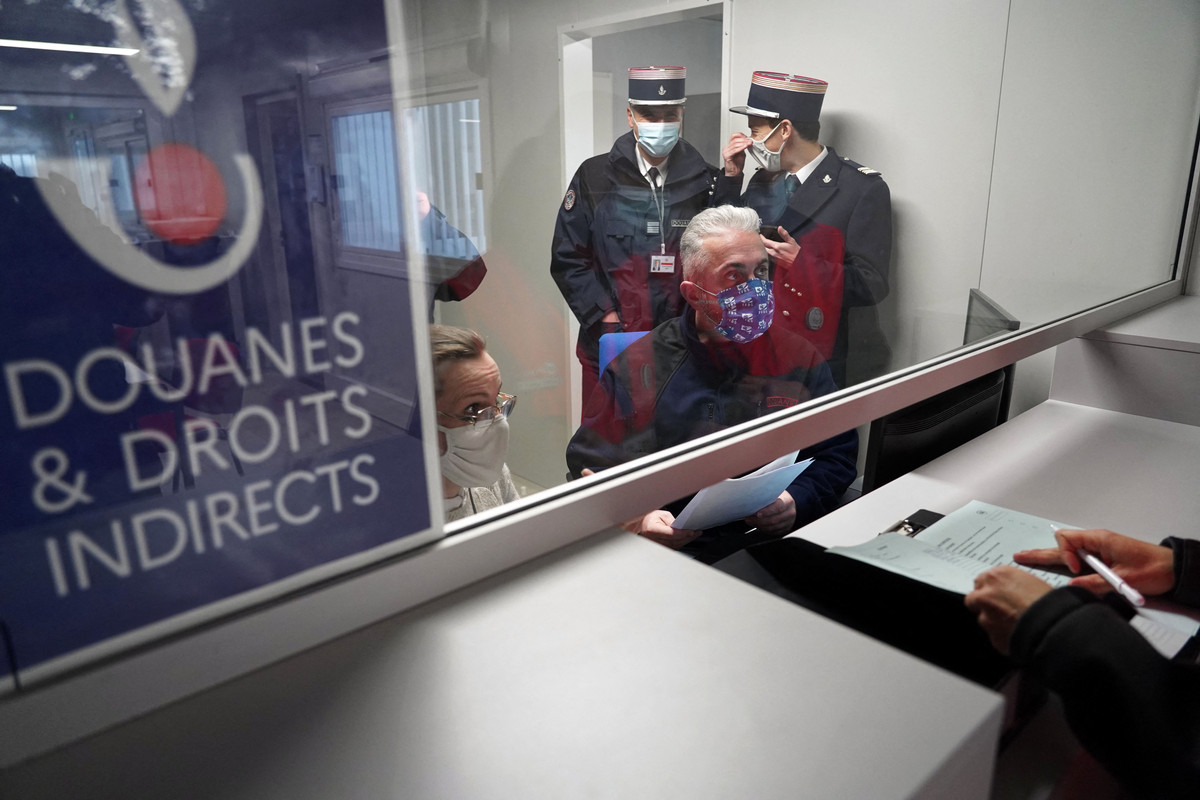 Inside the customs' office in Calais — Photo: Lefevre Sylvain/Abaca via ZUMA Press

There are still some misunderstandings, which kindle conversations amongst the drivers when they return to the parking lot. Maciej, who now speaks perfect English after living in the UK for several years, explains to his Polish colleagues the procedure to follow. They immediately pick up their phones and inform their shipping company, which in turn gets in touch with the firm that hired their services.

In front of the parking spaces that are filling up gradually, transit agents monitor the immobilization of trucks that are not allowed to leave. Only a signal sent by customs on their tablets will give them the green light to drive off.

Aurélie Dufour, who was recruited a few weeks earlier at the same time as the other transit agents, is experimenting with the device in real time — and for the first time — after only a few days of remote training. The agent makes sure that the vehicles are evenly distributed over all the parking lots. Fluidity is an obsession for all of the port's managers.

"The port's economic balance is based on continuous smooth movement, so it would be unthinkable to create endless traffic jams," explains Thibaut Rougelot, a member of Dunkirk's regional customs management.

But for now the port is calm, as the British built up unprecedented stocks before Brexit. "We had never seen so many luxury cars pass by," Jean-Marc Puissesseau, the port's CEO, says with a chuckle. The discovery of the highly contagious "British" variant of the coronavirus has also slowed down trade.

Since 2018, the key word here has been anticipation.

"We are ready, nothing will jeopardize all our preparations," says Xavier Bertrand, president of the northern region Hauts-de-France, who came to attend a presentation of the port's post-Brexit operations in front of an audience of senators. Since 2018, the key word here has been anticipation.

At the end of the orange markings, there is a new hangar that was built after fears over a "no deal" started to emerge in March 2019. Inside, the veterinary and plant diseases inspection service (Sivep), which was founded due to Brexit, is waiting to control all shipments of fresh products — a requirement since the trade deal was signed. The port of Calais has invested 7 million euros to create this department.

"We have spent a lot of time thinking about how things were going to turn out, and now we're finally moving from theory to practice," says Xavier Desmulier, head of Sivep Calais. The team collects samples from the products, which are then analyzed on site. Animals are examined by veterinarians in another hangar that's located two kilometers away from the port.

During controls, recently recruited inspectors check that the paperwork has been filled correctly and that the fees associated with the procedure are paid to customs. Once everything is validated, so-called "clerks" act as intermediaries between exporting companies and customs. If traffic is smooth and the formalities have been completed, the truck should be free to leave in less than an hour.

Even though a small grain of sand could be enough to jam the whole system, optimism reigns in Calais. "It is also up to the exporters to play the game. We have explained to them the need to declare their goods to customs for months now," says Marc Declunder.

Night falls and, one by one, the trucks leave. But Maciej is stuck still, waiting for the green signal so that he can finally start his three-day journey home. "In the end, this new border crossing means we have a lot of documents to prepare, but nothing has really changed for us," the Polish driver says.