Calais Crossing: An Inside Look At The Ugly Business Of Human Trafficking

Calais, France along the English Channel has served as a hub for UK-bound illegal migrants for more than a decade. Now Egyptian, Kurdish and Albanese traffickers are fighting for control.

CALAIS — Inside, the convenience shop sells the usual selection of beer and whiskey, chips and candy. Outside in the parking lot, just a few meters away, human trafficking is underway. Welcome to the Transmarck freight zone, on the outskirts of the northern French city of Calais.

Here, two hours away from both London and Brussels, Africans, Afghans and Syrians basically become merchandise, often spending several thousand euros to get across the English Channel to search for work in Britain.

Over the past decade, this place has become one of the strongholds of European migrant smuggling. And an important piece of it happens in this small parking lot, which is barely bigger than a tennis court, where trucks heading to the United Kingdom pass through. Much of the business occurs in plain view.

The police drive by several times a day to break the rhythm of the smugglers and dissuade them. But the inevitable flow continues.

At first glance, Transmarck looks like a dull and functional industrial zone: two streets, one roundabout, metallic warehouses, and trucks registered from all over Europe parked diagonally and close together on the secured parking areas of the region's companies. Only the supermarket is not enclosed by fences.

On a recent autumn afternoon, under the low skies of the northern department of Pas-de-Calais, the thickets rustle with nervous movements. Afghans are occupying the area. Around 15 men, crouching in the grass and the rubble, with their bags on their backs, are watching the stationary trucks outside the shop, just across the road. As soon as a heavy truck cuts its engine, the young men jump out, cross the road and try to sneak inside. Each attempt is a failure. The drivers, not all of them complicit in this game, are watching.

Ahmad, a 26-year-old student from Kabul, steps aside from the others not to disrupt them. He rolls a cigarette between his fingers. "We have until 6 p.m. to climb into the trucks," he says. "After that, it's the Africans' turn. We can only start again the following morning from 6 a.m. At that time, it's still a bit dark, so it's our best chance."

Price of a "guarantee"

All of this may seem surprising. They have a timetable to risk their lives to get to England? Ahmad suddenly seems confused. He arrived in Calais only four days ago, he says, and is simply following what the other Afghans are doing. And he was told they were not allowed to be at the parking area during the night. Why? He doesn't know. Did he pay to be allowed here? He doesn't answer.

Ahmad's kutchakbar (smuggler, in Farsi) is possibly there among the men in the bushes. A few months ago, the police were lucky. A smuggler got caught because he forgot one detail in his disguise: He was the only one not carrying a backpack.

At Transmarck, the migrant smugglers used to operate only at night. Now, they also make their customers try to sneak into trucks in broad daylight. The massive influx of newcomers, most from the Horn of Africa, allowed them to increase their revenue. The trade is profitable: 2,000 euros for a passing "with no guarantee," which means for a single attempt. Up to 5,000 euros for a "guaranteed" passing, for which the smugglers commit to make as many attempts as necessary.

And if there are deaths, by suffocation or being run over, there will always be new customers. Poverty is a flourishing trade. According to the United Nations Office on Drugs and Crime (UNODC), migrant trafficking yields more than $6.75 billion (5.35 billion euros) every year.

"People are treated like cattle," says Jean-Pierre Valensi, prosecutor of the Boulogne-sur-Mer high court, where most Calais cases are tried. "We find the migrants hiding in hollowed-out bottoms and in car trunks. Sometimes, it's whole families." One day, the police found five Pakistanis hidden in the trunk of a Mazda: the father, the mother and their three children, who had been given sleeping pills so they wouldn't make any sounds.

In the Calais region, parking lots are the center of migrant smuggling. Controlling them guarantees the domination of the market. Losing them means being outplayed by rivals. Kurds from Halabja, a town in northern Iraq near the current war zone where ISIS militants have attacked, rule the Marcel-Doret area of activity. The Eritreans control the Beau-Marais and the Steenvoorde service areas, on the road between the cities of Lille and Dunkerque. The Albanians, who arrived late in the business, control the gas stations further away along the A16 motorway: those of the Baie de Somme and of l'Epitre. An Albanian was stabbed to death one night in early March.

As for the Transmarck zone, for a long time, it was the territory of the Chamchamali clan, Iraqi Kurds, violent and very organized, implanted in the region for around 10 years and rivals of the Halabja Kurds. For a decade, they worked like a business: Traffickers blend in with the migrants in the "jungles" and the settlements. They lived like them, ate like them, slept alongside them. One of the heads of the network was found in a rearranged burrow in the forest. At night, their men organized incursions in the trucks. The Chamchamali were particularly fond of trafficking "the small eyes," as they called Vietnamese migrants, to England. They reportedly paid well and promptly.

But since 2011 and the breakup of a part of the clan by the border police, things have changed. The Kurds, weakened, have had to concede time slots to their rivals. The Afghan, Eritrean and Egyptian smugglers came along. Better give a bit of our territory than flee completely, the Chamchamali thought. They didn't imagine the Egyptians would outfox them. Led by an ambitious boss nicknamed "Ramadjan," the newcomers have waged war against the former bosses. 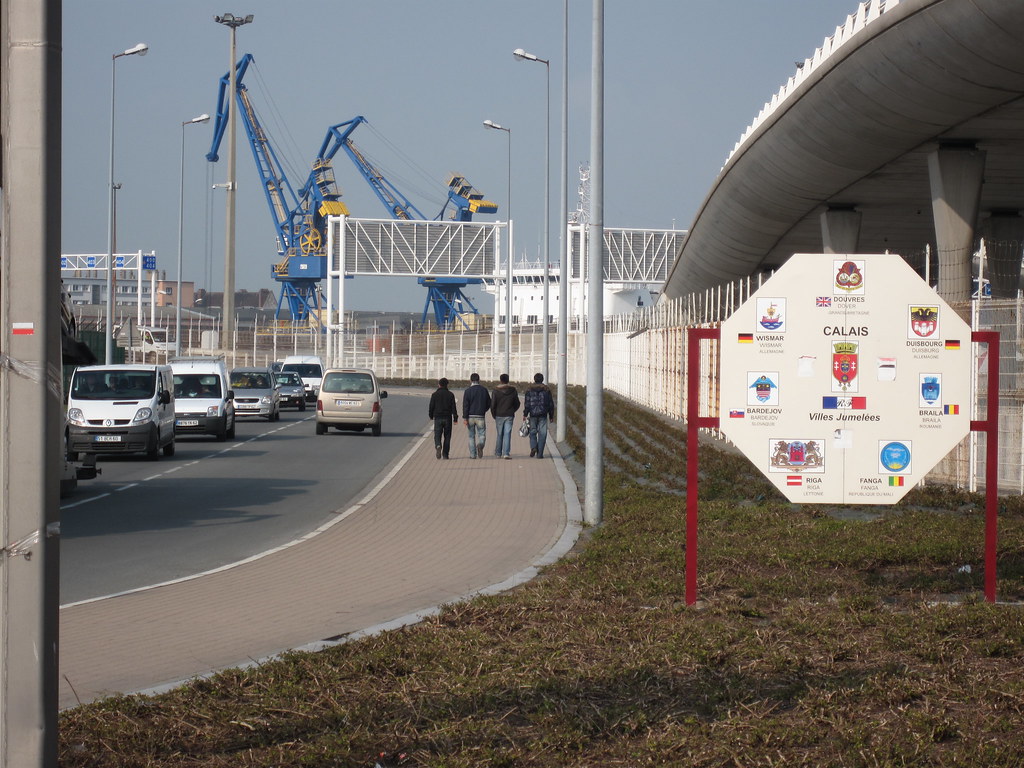 The groups fought each other twice in the freight zone in the early 2010s. Not far from the battle locations, the police found handguns, sawed-off shotguns and high-caliber hunting rifles. The Egyptians have partially taken over power, and rumor has it that in Egypt, "Ramadjan" has built himself entire streets.

In one of the parking lots, an employee wearing overalls categorically refuses to reveal his name or his company's so he does not have any "complications." Still, he describes what he sees every week: The smugglers climb onto the roofs with a knife to cut the top off the canvas covers "just behind the driver's cabin" and push their customers to climb in there. The drivers end up with damaged trucks. Pallets are turned over. "It's really bad for business," says one driver. Most of the time, the migrants sneak in without the drivers knowing, but sometimes, unscrupulous drivers are paid to turn a blind eye.

In his office, March's young Mayor Pierre-Henri Dumont confirms what the employee would barely say out loud. "Some Transmarck companies have lost 20% to 30% of their revenues." Leaning over his desk, he holds out an aerial-view photo of the freight zone, printed from Google Maps. With the tip of his pen, he points to a field. "That's where the migrants live." It's only 500 meters away from the supermarket. Some freight companies now ask their drivers not to stop there anymore, and to take their break and fuel up before that, near the city of Lens, 100 kilometers away.

In his office of the Boulogne-sur-Mer high court, prosecutor Jean-Pierre Valensi says his powers to stop the flow are limited. "The heads of these networks are in England, and in our courts we only sentence the smaller players," he explains.

There are ebbs and flows, and new routes arise all the time. But here, between the European continent and the opportunity and relatives that await in Britain, the stream of humanity shows no signs of drying up.

Erdogan v. Macron: Power, Faith And The Opposite Of Diplomacy

Things are heating up between Erdogan and Macron, leading to the recall of the French ambassador in Ankara. France's efforts in training local imams may thwart Turkey's policy of influence through religion.

-Essay- PARIS — The rendez-vous was for last January 21, on the anniversary of Louis XVI's death. A friend had tipped me off that hundreds of French citizens gather each year in Paris to ...