Just The Two Of Us: Why Belarus' Lukashenko Is Betting On Putin

MINSK — Following the Nov. 17 elections for Belarus' lower house of parliament, independent observers and opposition politicians unanimously rated this campaign as one of the dirtiest in the 25 years of Alexander Lukashenko's rule. The 65-year-old president of Belarus has once again demonstrated that he is not going to adjust the eastern tilt of his country's development: the West's democratic values clearly scare him far more than the threat of anschluss from Russia.

Opposition campaigns, television programs and the written press were rudely censored or banned altogether if any direct attacks on Lukashenko were spotted. The turnout data was significantly overstated, the independent observers were deleted, and the process of counting votes was utterly opaque. "These elections have demonstrated a complete lack of compliance with democratic commitments," said Margaret Soderfelt, head of the local mission of the Organization for Security and Cooperation in Europe (OSCE), which monitors elections.

A cold shower for all optimists.

The final composition of the parliament looks to carry no true political weight: 110 loyal deputies and not a single oppositionist got into the lower house. Attention was reserved for only new face: Maria Vasilevich, the 22-year-old "Miss Belarus-2018."

The election's outcome came as a cold shower for all optimists who dream of gradual democratization. A minimum nod of decency and the admission of 3 or 4 opposition members to parliament could have sufficed to help in negotiations with the European Union. However, the Belarusian authorities decided that there was no such need. 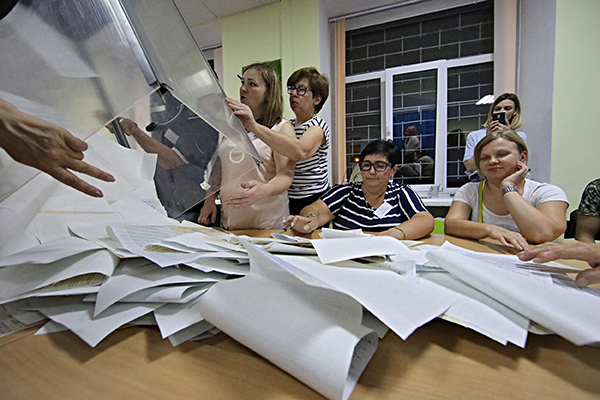 Five days before the election, Lukashenko paid an official visit to Vienna. The Austrian voyage was just the second trip of the Belarusian leader to Europe over the past 10 years, after a purely symbolic 2016 visit to Rome. There was every reason to expect more from the current visit to Austria, because Belarus is facing extreme pressure from the Kremlin, and desperately needs Western support, including financial aid. However, meetings with top officials of Austria turned out to be insignificant, as Lukashenko mainly advertised the Belarusian order and discipline and also convinced interlocutors that everything is fine with human rights in his country.

Still, Lukashenko is also sharpening his tone with the Kremlin, threatening to refuse to sign an integration agreement with Moscow. "If our fundamental issues are not resolved (regarding the supply of hydrocarbons, the opening of proper markets for our goods, the removal of barriers, etc.), no road maps can be signed," he said.

There is growing alarm about the country's sovereignty in the face of Russian ambitions.

Across Belarus society, there is growing alarm about the country's sovereignty in the face of Russian ambitions. After the 2014 annexation of Crimea, the Belarusian president realized that Putin poses a real threat. But for Lukashenko, Moscow is only one of the threats to his power along with the West and the domestic opposition. And he may consider Russia to be the least of the dangers.

Moreover, today's Russia shares a mentality with Alexandr Lukashenko: the cult of power, contempt for human rights, anti-Westernism and a certain nostalgia for the USSR.

So what has this most recent, and notably filthy election campaign told us? It seems that Lukashenko is nervous. When the Belarusian regime felt confident, he could afford to at least pretend to lean toward liberalization and allow a couple of critics into parliament, as he did in 2016. Now the real threat of takeover is looming, economic prospects are dim, and Lukashenko himself, for a long time, has lost faith that the people actually support him.

Thus, any freedom frightens him, and there can only be one solution: tighten the screws inside the country, while negotiating for the best deal possible with the Kremlin.

*The author is an independent Belarusian journalist

In Belarus, Purpose And Method In Hunting Down Demonstrators

Alexander Lukashenko's regime is sending more and more protesters to prison to try to prevent a n...

Forced into exile in Lithuania after the contested Aug. 9 Belarusian presidential election, Tikha...