Nine months after the military installed a new interim leader, a young colonel has again taken over the country in what looks like pure power play. But it may not be so simple, and Malians and international allies alike worry about what happens next.

BAMAKO — Camp Soundiata-Keita is well guarded, and so are its secrets. On Saturday, May 29, in the village surrounding the military base, just 15 kilometers from the Malian capital, Bamako, strangers are met with suspicions and trepidation. "What are you doing here?" scolds a local woman, to an unfamiliar face. She is soon joined by a soldier on guard duty.

In these hills, the birthplace of all Mali's coups over the years, tensions have remained high since the most recent ousting of the civilian government on May 24. Like the coup nine months ago, this one was also carried out by Colonel Assimi Goïta. In the interim, the mysterious special forces commander became Mali's vice-president. However, when transitional President Bah N'Daw formed a new government that excluded two people close to Goïta, the Colonel responded by arresting the transitional President and his Prime Minister Moctar Ouane. They, along with several other government officials, have since been released but were forced to resign.

On May 28, Colonel Goïta was proclaimed head of state.

"You had better not have come here to reveal our military secrets" warns the guard before walking away. The military camp was built to protect the nearby presidential palace, Koulouba, from enemy invasions, but in reality it is the military camp itself that has become the greatest threat. "More than anywhere else, families in Kati see their sons killed in combat. When politicians slip up, the military responds by going up to Koulouba," said the Colonel.

While the years-long war against jihadists in northern and central Mali is still far from being won, the military has once again used its resources to intervene in the civilian-political game in Bamako. On August 18, 2020, a group of five colonels, led by Goïta, forced Ibrahim Boubacar Keïta, known as "IBK," to resign.

This second coup was hardly led by the people.

Nine months later, it was the same story all over again, this time with the transitional president. As history repeats itself, the international community has been left both worried and embarrassed, issuing verbal warnings and condemnations. On June 4, French President Emmanuel Macron announced he would halt joint operations with the Malian military. Just a few days earlier, after a four-hour meeting in Ghana, the West African heads of state decided to suspend Mali from the African Union, reiterating calls for the appointment of a civilian prime minister, while still avoiding the imposition of sanctions.

How did the situation become so grave? What went on behind the scenes that allowed the overthrow of the Malian power structure for a second time in just nine months? As much as IBK's fall had been the culmination of weeks of popular protest, this second coup was a pure power play.

Angered by the growing influence of the military, which has controlled four key ministries since the beginning of the transition period, President Bah N'Daw announced the dissolution of the government on May 14 and reappointed his Prime Minister Moctar Ouane. Colonel Goïta, the Vice-President and head of defense and security, was not informed. Tensions rose. For ten days, they engaged in strained negotiations as operatives involved in the first coup sought to maintain their place in the government.

According to reporting by Le Monde, President Bah N'Daw brought his plans to Colonel Goïta, whom he had known all his life. "N'Daw was Goïta's tutor when he was young. He cared for him as if he were his own son," says a former minister. The 38-year-old Colonel then responded by asking his "Uncle," a mark of respect and closeness, for some time to think. 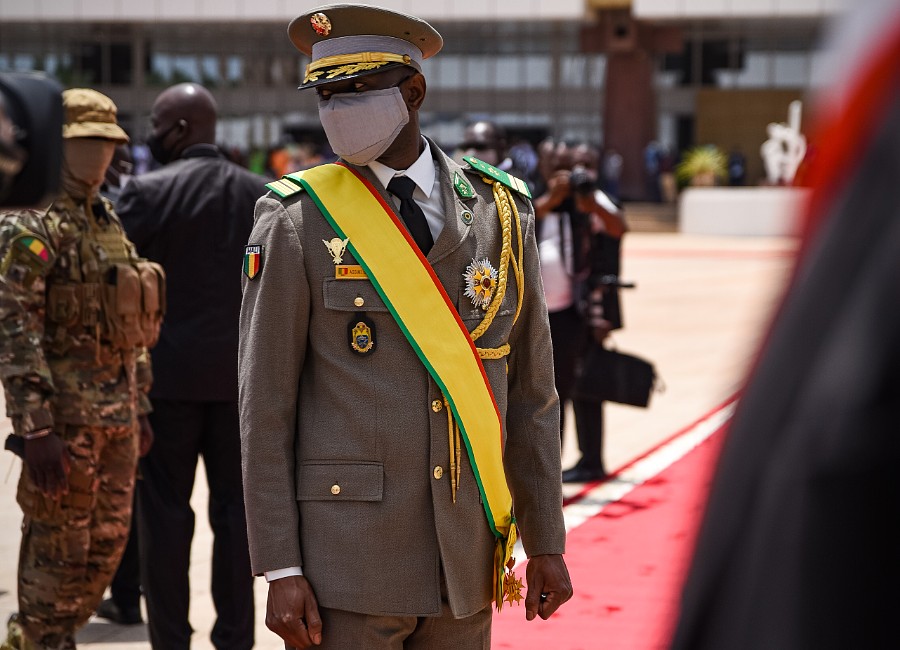 In Bamako, Mali Colonel Goita is officially sworn in as President of the Transition — Photo: Nicolas Remene/Le Pictorium/ ZUMA

The next day, Goïta tried to have Colonel Camara placed with the Malian intelligence service. But Bah N'Daw decided that this was too far. "It's this [the first option] or nothing!" he retorted to his former-mentee. "I am the president and it is my right to change government appointments." Tired of being seen by the public as a pawn of the military who was simply given the presidency to appease the international community, N'Daw was ready to stand up.

But there is another obstacle besides simply reshuffling the parliament: the militarization of institutions. Eleven of the 17 governors, the Gabriel-Touré hospital in Bamako, the Health Insurance Fund: all are run by former coup organizers. The situation is grave, but in February 2022, general elections will be held, hopefully bringing this chaotic period to an end.

In a public statement, Colonel Goïta said he was "obliged to act to preserve the transition charter." However, a few hours after the televised announcement, soldiers raided the homes of Moctar Ouane and Bah N'Daw. From Mr. Coulibaly's legal perspective, this was neither an arrest nor a coup d'état, but simply a "recovery of the transition." Prime Minister N'Daw was guilty ... his crime: removing two coup orchestrators from the government.

The possibility of division within the military was too dangerous.

But for Colonel Goïta, the possibility of division within the military was too dangerous. Responding to the new government became "a matter of life and death," which he later used as justification to religious leaders who had gathered at the presidential palace on May 29.

Detained, like his Prime Minister, Bah N'Daw immediately assumed the posture of a prisoner, asking for neither a mattress nor a television. He was not mistreated, and he held his head high. To him, the younger officers acted with "indiscipline" and "insubordination." But he insisted to his family that "it's not for them to be my judge and executioner. That legitimacy rests with me, and that Act is illegal." However, the battle over authority ended with N'Daw's resignation. In assuming power, the silent Colonel Goïta has now perhaps become prisoner to those who made him king.

In Bamako, Malians appear tired of seeing their political life marked by ineffective policies sanctioned by successive coups d'état, the fifth since the country's independence in 1960. As expected, the virtues of democracy are no longer strong considerations for the group that formed on May 24 to support the takeover. "Our politicians, from IBK to Bah N'Daw, have all failed. When they betray the motherland, our army is there to teach them a lesson," warned one Malian named Alexandre.

Behind him on Place de l'Indépendance, only a few hundred people gathered in the place where all the popular mobilizations converge. The fervor that drove the August 2020 coup and the protests against the IBK regime has dissipated.

In April 2020, the disputed results of the legislative elections triggered a wave of anger in Malians. Now in power, the military is promising to reform the electoral system before the end of the transition, claiming to be committed to avoiding another "botched and fraudulent" election. However, such a vast undertaking takes time, giving the coup plotters an excuse to extend their 18-month legal tenure, which is set to end on February 27, 2022. "It will be up to the people to tell us whether or not to continue afterwards," the junta's lawyer warned. Neighboring heads of state have reaffirmed that the date "should absolutely be maintained."

Colonel Goïta and his group took advantage of these protest to seize power, partially by throwing the political class, who they considered to be the cause of Mali's bankruptcy, under the bus. It remains to be seen how these young officers will adapt to the next crisis.

After the Aug. 18 coup d'état in Mali, a growing popular protest movement that emerged in June ma...

Against Jihadism, The Power Of Art