Mubarak in Budapest in 2009 - Balint Fejer/ZUMA

Egypt's longest-serving president, ruling from 1981 until 2011, has died at the age of 91. From humble beginnings to iron-clad rule of the largest Middle East nation.

CAIRO — Former President Hosni Mubarak has died at the age of 91. Mubarak was Egypt's longest-serving president, ruling from 1981 until 2011 when he was ousted following a mass uprising against his rule.

For a man who would come to be known as Egypt's modern Pharaoh, Mubarak had humble beginnings.

Mohamed Hosni Mubarak was born in the rural Monufiya village of Kafr al-Meselha on May 4, 1928. His father, Al-Sayed Ibrahim Mubarak, was a courthouse janitor and his mother, Naeema, was a traditional rural woman, an illiterate housewife. He had four siblings: an older brother and sister, Ahmed Samy and Samia, and two younger brothers, Fawzy and Essam. While little is known of Mubarak's early years and his relationship with his family, certain incidents — such as his mother's documented attempt to take her son to court in 1960 for refusing to help pay her escalating medical bills, or the heavily rumored media ban he ordered imposed on his own brother — may help paint a clearer picture.

By most accounts, Mubarak was a hard-working student, who eventually enrolled in the Egyptian Military Academy, where he earned a bachelor's degree in military sciences and the rank of second lieutenant.

His political path was set in 1975 when he was made vice president by President Anwar Sadat. On October 6, 1981, he would become president of Egypt after the assassination of Sadat.

Two types of Islamists would prove to be an issue throughout Mubarak's three-decade tenure: jihadists and reformists.

The jihadists were led primarily by Jama'a al-Islamiya and the Islamic Jihad movement, who together perpetrated a string of terrorist attacks targeting primarily tourists, state officials and Copts during the 1980s and 1990s.

Mubarak's fight against these forces had allowed him to gain the support of various segments in Egyptian society and hence consolidate his rule. By the mid-1990s, his security apparatus had broken the bones of these two organizations.

This was the product of a well-balanced distribution of power among the different agencies of the security apparatus protecting Mubarak's rule. He banked largely on the security apparatus as represented by the Interior Interior Ministry and specifically, the State Security Investigation Service. The police force is said to have increased to over a million personnel by 2002, from a mere 150,000 in the 1970s. Scholar Hazem Kandil put the ratio of security men to citizens in Mubarak's Egypt at 25 security men to every 1,000 citizens.

Mubarak's bolstering of the security apparatus came as the military was gradually receding further into the background in the wake of the 1967 war. Following the signing of the peace treaty with Israel in 1979, with Egypt's main external threat having subsided, focus turned to internal threats. The police assumed a major role while the army increasingly moved out of the public eye. Many say that this backtracking of the military institution from political life is what preserved its popularity and legitimated its take over in 2011 following the January 25 uprising.

Mubarak's triumph against the internal threat of the Brotherhood did not, however, mark the end of his investment in the Islamist phenomenon. On the contrary, he continued to feed into and exacerbate local and Western fears by feeding into concerns that any sweeping opposition to his regime or any genuine democratization might culminate in an Islamist takeover. In this equation, reformist Islamists, namely the Muslim Brotherhood, stood as the enemy conspiring to eventually hijack the state and reproduce the Afghan Taliban model on the Egyptian soil. 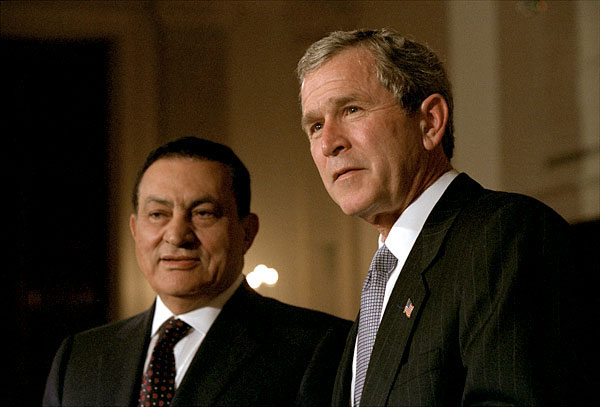 Deriving legitimacy from being the antithesis of the Muslim Brotherhood required that the latter always be present in the political scene. This complex reliance on the Brotherhood explains why the group remained banned but quite tolerated and allowed to engage in competitive politics.

Mubarak's strategies prevented the emergence of any viable secular alternative to his regime.

Throughout his tenure, Mubarak allowed the Brotherhood to run for student unions, professional syndicate boards and Parliament. In the meantime, his police orchestrated periodic waves of arrests aimed at weakening, but never dismantling, the nation's oldest Islamist organization. Throughout, Mubarak's strategies prevented the emergence of any viable secular alternative to his regime.

In 2005, Mubarak allowed the Brothers to achieve an unprecedented electoral victory amid American and European pressure on Arab regimes to democratize. The Muslim Brotherhood's candidates had won 88 out of the 444 contested seats and emerged as the largest opposition bloc in the People's Assembly, which was dominated by Mubarak's National Democratic Party.

This victory affirmed the self-proclaimed raison d'etre of Mubarak's regime — that any significant political opening would only empower Islamists.

Alarmed by Islamist electoral victories across the Middle East, Western pressure waned, giving Mubarak leeway to crack down on Islamists once again. In late 2006, Mubarak's police arrested dozens of high-ranking Brotherhood leaders, including Khairat al-Shater, and referred them to a military court.

Mubarak's use of the Islamist card to justify a repressive police state played out well with his foreign backers. When he took over the presidency he inherited a close relationship with the United States and the West and a cold peace with Israel. With only a few minor hiccups, those relationships stayed the same throughout his 30-year rule thanks to institutional and personal connections and mutual interests.

No one in Washington knew quite what to expect from Mubarak's first presidential visit, but he impressed US officialdom. A report on Mubarak's appearance at an opulent White House dinner filled with celebrities and high-powered officials described Mubarak as "untheatrical and austere."

Early on, the US was afraid Mubarak would apply pressure to change the status quo on issues like the Israeli occupation of Palestine or spurn the close relationship Sadat had established with Washington. He did not. He did leverage these circumstances to increase US aid to Egypt from $900 million to $1.2 billion annually, where it remains today.

In exchange, Mubarak maintained the peace with Israel, and Cairo hosted numerous conferences between Israeli, Palestinian and Western officials.

He was known to personally charm members of Washington's policy establishment.

But it wasn't just his role as a mediator that kept Mubarak popular. He was also known to personally charm members of Washington's policy establishment, reportedly playing squash, his favorite sport, with senators and State Department officials. His sense of humor may also have helped him stay in their good graces, even when his policies irritated policymakers.

A 2009 cable to Washington from the US Embassy in Cairo ahead of a visit by Mubarak to the US sheds light on how the Egyptian dictator was viewed by his allies. He is portrayed as stubborn and old-fashioned, but generally competent and, above all, a nationalist. Following his tense relationship with the Bush administration, Mubarak was eager to restore relations with his traditional ally, according to the cable, which was released by Wikileaks.

During Mubarak's last days in office, though, officials in Washington could tell which way the wind was blowing. Although then-US Secretary of State Hillary Clinton said on January 25, 2011 that she believed Mubarak's regime was "stable," just six days later Washington sent former Ambassador to Egypt Frank Wisner to meet with the embattled president. Wisner reportedly told Mubarak "he was not going to be president in the future." A day later, then-US ambassador Margaret Scobey met with opposition activist Mohamed ElBaradei to discuss an "orderly transition in Egypt."

One of the catalysts of the January 25 revolution that would bring down Mubarak was a three-decade-old economic system that enriched a coterie of men on top, including the president, his sons and their friends, while the unconnected masses grew poorer. Corruption was endemic, though much of it was covered with legal loopholes.

In May 2015, the deposed president and his sons Gamal and Alaa received three and four-year prison terms for embezzling state funds and spending them on their own private mansions. In 2017, he was acquitted of charges of selling natural gas to Israel at a below-market price. Both cases are illustrative of the kinds of deal-making that eventually led to his downfall. They were often shrouded in secrecy and satisfied private interests at the expense of national ones.

Mubarak inherited an economic system from Sadat that had begun a process of infitah (opening), by which his predecessor aimed to move from state ownership of strategic industries — a legacy of Gamal Abdel Nasser's Arab Socialism — toward the free-market model. Mubarak continued this program, and eventually, private enterprise came to dominate the Egyptian economy. The private sector's contribution to the GDP rose from 30% in 1991 to 80% in 2006, according to Youssef Boutros Ghali, Mubarak's last finance minister, who was sentenced in absentia to life in prison on corruption charges.

Mubarak's failure to develop a truly free market economy, one that was without political interference, also meant he failed to create equitable growth that provided enough jobs for a fast-growing, young population.

Opposition to Mubarak's rule grew throughout the 2000s, including against rampant police torture, economic inequality, and a perceived plan to have his younger son Gamal succeed him in power. The opposition coalesced into a mass uprising on January 25, 2011, that eventually formed the army to remove him from power on February 11, 2011.

In a leaked audio recording featuring Mubarak and published by his supporters Facebook page "We are sorry Mr. President" in 2018, the deposed president said that he was planning to leave power by 2011 and that his plan to pass on the presidency to his son was nothing more than a rumor spread by the Americans.

In March 2017, Mubarak was acquitted on charges related to the killing of protesters during the 2011 uprising that led to his ouster. At the time, judicial authorities stated that he had already spent three years in detention, which constituted the three-year sentence he received in the presidential palaces corruption case.

Following his February ouster, Mubarak was detained in April 2011 as investigations began on several charges against him, but spent most of his time in custody between different hospitals. On March 24, 2017, Mubarak was officially released from custody and went back to live in his villa in Heliopolis.

Mubarak is survived by his wife, Suzanne, and his two sons, Gamal and Alaa, both of whom are legally banned from political life for their conviction alongside him in the presidential palaces case. He is also survived by three grandchildren.

Regrets And Solitude From An Egyptian Lesbian Turning 40

"Where do we go to die, when we have lived thousands of lifetimes in a world that was not made fo...

Nine years after the Jan. 25 popular revolution that overthrew President Hosni Mubarak, so much o...