When reality transcends constitutional and legal provisions, you must be extra clever about social media use.

CAIRO — I don't remember exactly when I decided to create a parallel identity for myself on Facebook. Was it on one of the days following the September 20 demonstrations after I read on social media about security forces stopping citizens downtown and forcing them to enter their passwords to browse around their apps in the hopes of catching people who oppose the regime?

Was it during the weeks following the demonstrations, when the feeling of shock about the arbitrary arrests wore off and I realized that I was delusional? I was deluded by the scenario my mind automatically formulated as events occurred. Did I really believe that if I were in a situation where an officer demands my phone, I would refuse? That I would assert that it was illegal and unconstitutional? That they would be silenced and leave me be – even if after some harassment?

When I pictured the officer asking for my phone, my imagined reaction was confrontation and refusal for feeling violated – knowing that it is, in fact, a violation – because no officer, no matter how highly ranked, has the right to access my private calls without substantiated court approval. Yet reality, as we well know, transcends constitutional and legal provisions, for they are often good willed, but are not as realistic as necessity requires them to be. And the necessity here is to prevent any opposing political expression — and so everyone becomes a suspect.

After thinking for a while, I remembered: I had decided to create another account after a colleague had convinced me that the consequences of such street confrontations are unpredictable. He emphasized the spread of arbitrary arrests and how easy it is to frame anyone, whether or not they have social media accounts. He convinced me that taking a risk is pointless and concluded with advice that seemed very wise: "Don't dwell on it — create an account."

During the demonstrations and in their aftermath, security forces detained over 4,000 people. And according to testimonies by lawyers, families and acquaintances, many of them were detained simply for being close to demonstration sites, even after the protests were over. Some of them were arrested because their phones contained content related to the events. Even foreigners were not spared, like the American student who was taken to State Security headquarters for interrogation after an officer saw that he had sent his friends news articles about the demonstrations in Egypt.

But learning about these incidents on the news or social media is totally different from hearing someone's story firsthand.

Adel*, a friend of a friend, told me of an incident in which his phone was searched in Tahrir Square one day following the September 20 demonstrations. He met a friend at a cafe on Mohamed Mahmoud Street, then they walked to the square, at which point a plainclothes officer stopped Adel and asked for his ID, then his phone – with such ease, as if it was a normal, everyday occurrence.

You're about to look in on my girl.

Given his awareness of the events, Adel had deactivated his Facebook account the day before and deleted the application from his phone along with Twitter, which annoyed the officer: "Is there anyone not on Facebook?"

But he didn't force Adel to open his account and moved on to his WhatsApp messages, which irritated Adel.

The officer gave Adel back his phone and ID and although the officer's attitude was not hostile, Adel felt violated. "Our entire lives are on the phone now, it contains all our troubles," he said. And even though Adel took all the precautions, he was aware that it was impossible to be 100 percent safe.

So, don't be lazy and create another account that's free of politics, because a policeman may be displeased by your lack of presence on social media, which would have given him a window to what's on your mind, and could decide to arrest you out of spite.

Step 2: Be of no significance and politics-free, even if it's pro-regime

"Cats and dogs," some of my friends who were compelled to create parallel Facebook accounts said enthusiastically. They stressed that these domesticated animals exemplify the pinnacle of neutrality and advised me to like as many pages dedicated to them as possible.

The general philosophy of their accounts is eradicating suspicion whereby someone meddling in their phone would become totally convinced that this person is "in Lalaland," as expressed by Hazem* who created a new account right after the September 20 events. His original account is full of political content and comments criticizing the regime.

A colleague at work advised me to follow all the news pages so that my timeline becomes a torrent of random stories. This would make the account bland as it lacks the features that would place you in a particular frame.

Yet, this fogginess could also expose you to random explanations. You could be placed in different frames in each incident based on the whims, biases and psychological history of the inspector. He could settle on an analysis of your account that makes you out to be a potential demonstrator and leads you to the police van. 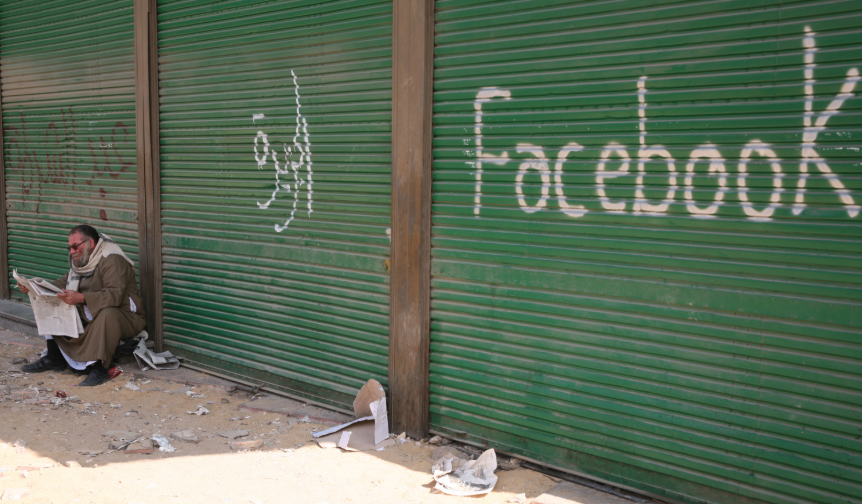 That's why I decided to rely on a mix of randomness and uniqueness. In addition to the many news, puppy and kitten pages, I started building a personality through likes – one that would leave a follower of my account with the impression that I'm truly "in Lalaland," but that I'm also made of flesh and blood. And though I sought uniqueness – to alleviate the suspicion that I'm not real, I must do so by assimilating with millions of contemporary young Egyptians hinged on a group of icons who clip the claws of any political ambition and strike knives in the hearts of meddlers.

I decided that I like PlayStation. Yes, I'm a gamer! Egyptian PlayStation pages are countless, it's easy. I started liking my other self in spite of our contradictions. I differed from many others on a number of pivotal issues, one of which is the love of football – yes, another idea! Any page related to Mohamed Salah or Liverpool, Like! Al-Ahly FC, Ahly members and Ahly lovers, Like.

It was entertaining. I pictured myself as a cheerful young man who loves entertainment and laughter, who respects elders, who is passionate about his country

Lovers of jokes, prayers and self help who frequently share are the big fish.

(I liked the page "The honor of the Egyptian military"), and who is estranged from politics and doesn't speak about it because he doesn't understand it and feels that it tenses the mood for no reason.

I updated the way I manage my account. I selected who I befriend on it. I refused friend requests from politicized individuals and added those with little engagement on their accounts. As for lovers of jokes, prayers, self help and life lessons who frequently share, those are the big fish.

I acted on social media with elderly naivety: I liked any post, shared posts with comments composed of at least five emojis, and shared cats and dogs to bid my friend good morning and good night.

Contrary to my expectations, the new account didn't bother me. Even though I was dealing with it as a joke I'm playing, maybe on a future policeman, I began engaging with it constantly.

Step 3: Commit to immersing yourself in your parallel account, even if your engagement in it goes too far

The feeling that I'm playing a joke lent the whole thing a sense that it's temporary, like the state of high alert that came over ruling agencies after the demonstrations. As if when this state ends and fingers start to loosen on the trigger, I'll lose interest in my new account. If you find yourself feeling the same, don't let the account float idly in cyberspace because the third step is that it must live on.

I found an urgent need when I accessed my account shortly after creating it, after a few days of keeping away from social media, and noticed that my friends are no more than 20 and that my engagement is so limited that anyone who checks my profile can reach its creation date with a couple of scrolls. Additionally, my timeline was dominated by posts from two or three pages I had liked. No, this isn't a real account, I must dive deeper.

I began sending friend requests to dozens of friends and acquaintances – domesticated ones, of course – and liking more pages. In fact, I started writing statuses every now and then, random questions about normal life issues.

But was that enough? Yes, I could engage and deepen my parallel virtual presence for days, then forget it for days. Then I'd remember, access it and strongly engage only to forget it again. In the end, all my efforts could be in vain if engagement wasn't enough. I must make it sustainable. Unfortunately, I'll have to download the Facebook app on my phone after years so that I can constantly engage. This had an unexpected effect.

"I no longer wanted to go back to my original account," Hazem declared, while laughing at the ridiculousness of the discovery. He told me that once he shared a GIF of a cat just for engagement, without clicking it, only to be stunned by more than one friend commenting on it. He realized when he clicked it that it was hilarious and that was the beginning of his immersion in his new account — in fact, his appreciation for it.

Most are typical members of the Egyptian middle class.

In contrast, my friend Sanaa* wasn't happy with the effect her parallel account had on her. She had to reconnect with many family members she had blocked on her old account for their intellectual and political positions that upset her. On the new account, even though they emotionally upset her, Sanaa considers them key contributors to building her desired virtual personality.

"The timeline is full of preaching, patriarchal posts and photos of engagements, marriages and kids. Most of them are typical members of the Egyptian middle class. As you can see, the timeline is all full of shit," Sanaa said with a curiosity that is almost anthropological toward the increasingly distant relatives requesting to befriend her new personality as a result of her resurfacing in the Facebook circles of closer relatives.My own immersion came with momentum — a habit of opening the app once or twice a day to engage.

All I know is that all of us with domesticated Facebook personalities — with our smiling, traveling or family profile pictures — came to life, became more convincing, found relief sometimes and security always.

If you feel that you could be in danger – we all know that the phantom of protest can visit any time and that the threat of violations is always there, don't let your noble Facebook die. Look after it as though it were a plant. It only takes 15 minutes every one or two days. Maybe in the near or distant future it will be your savior.