Armenian refugee children near Athens in 1923 after expulsion from Turkey. - Wikimedia Commons

Unlike the "Righteous Among The Nations" of the Nazi Holocaust, individual Turks who opposed the Armenian genocide are lost to history. Again, Turkey's government is largely to blame.

SOLOGNE — Whenever Jean-Pierre Fleury's mother talked to her son about the fate of the Armenian people, she would always end her story with a reminder: "Never forget it was Turks who saved us..."

Fleury, growing up in France, had only discovered his mother's Armenian origins when she started talking with a stranger in a language he did not understand, and suddenly burst into tears. Shaken by this revelation, the young man never stopped questioning his mother about the tragic events that led to the death of 1.5 million Armenians under the Ottoman Empire, between 1915 and 1923.

But like tens of thousands of Armenian refugees in France, Jean-Pierre's mother, Joséphine Mouradian, preferred not to talk about the events that would 60 years later be qualified as the first genocide of the 20th century.

"When she died, I didn't know much," he explains today, speaking from the hunting lodge he runs in the central French town of Sologne. "Since then, I have visited Syria and Turkey, I spoke with those who still had memories of what happened, and I learned that my great-grandfather had his head put on a spike. But what I still had no idea about was who these Turkish people who saved us were."

Jean-Pierre is not the only one unaware of the names and identities of those his family owes their lives to. In Erevan, the capital city of Armenia, Maryam recounts the story of a good Samaritan whose name has been lost.

He told them: 'I can't let people as beautiful as you die, it would be a sin against God.'

"My family lived in Izmir. They were jewelers. One evening, their neighbor, a Turkish soldier, came to tell them that massacres would be happening the next morning. He told them: 'I can't let people as beautiful as you die, it would be a sin against God'". The Turkish soldier then proceeded to put the children on donkeys and brought the family to Izmir harbor, where a boat was departing to Greece.

Maryam remembers : "My great-aunt, who was little, would always tell us about this sordid detail: what she had first thought was algae in the harbor at night turned out to be the hair of decapitated women."

But the testimony she wants to share now is not about the violence endured by her people, but her gratitude for the Turkish soldier: "We later learned that when he came home, he and his whole family were executed because he had helped Armenians flee. Every night, my grandmother would pray for the soul of this soldier and his family."

Soldiers or shepherds, but also government employees and VIPs, there were a heroic handful of Turks who opposed the deportation orders from the Committee of Union and Progress (CUP), who then ruled the Ottoman Empire. But unlike the Righteous Among the Nations of the Nazi Holocaust — named by the state of Israel for non-Jews who took action to save Jewish would-be victims — the heroes of the Armenian massacres have never seen their names printed in history books, nor honored by any commemorative plaque. To a large degree, this is a side-effect of Turkey's continued refusal to acknowledge the existence of the Armenian genocide. Denial has become the Turkish State's policy, and it is dangerous to challenge it. 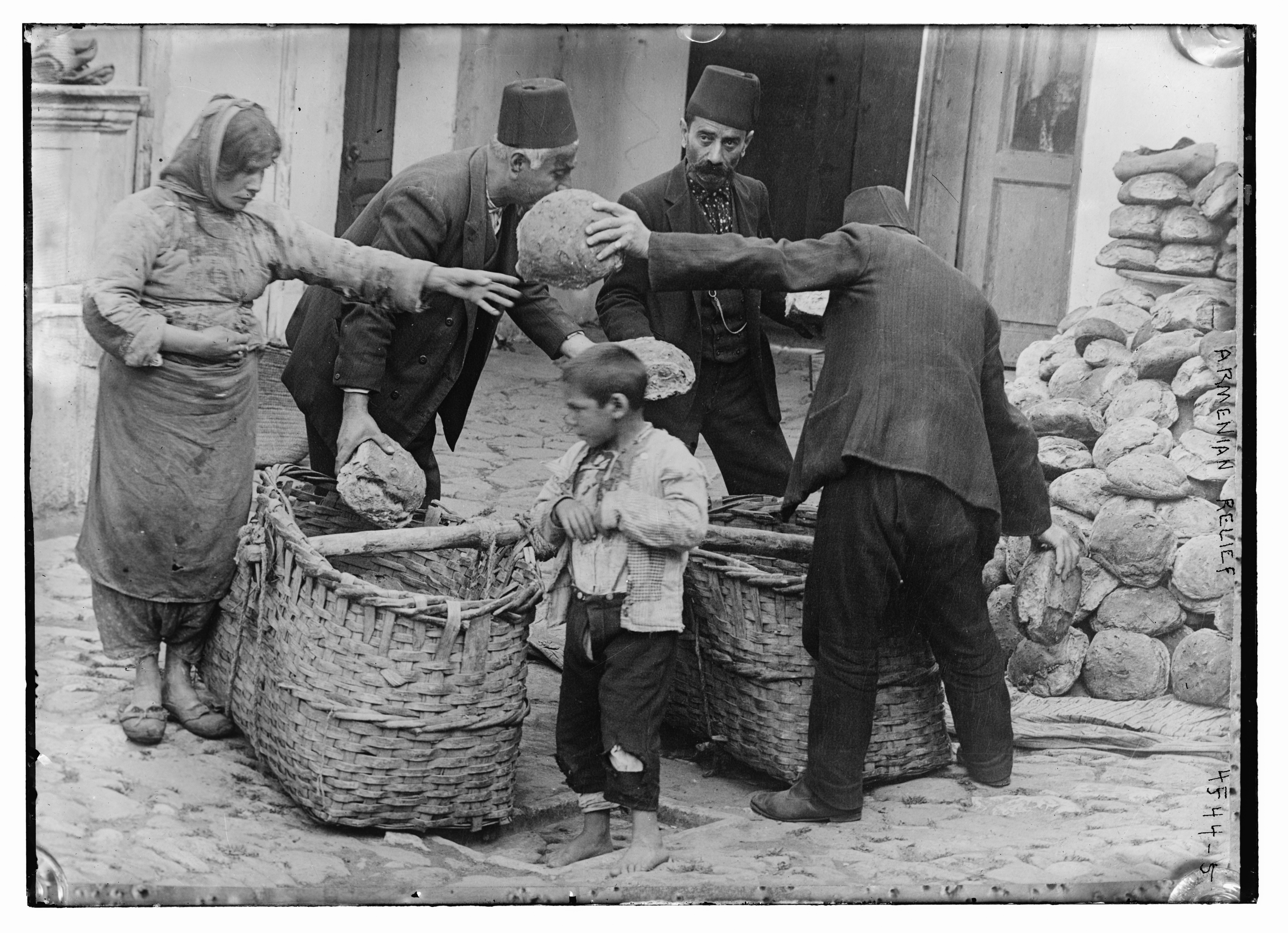 How could we imagine a commemorative effort for those who, among the Turks, directly opposed government directives in the future Turkish State? "There often is a Turk or a Kurd in the memories of survivors," according to Lusine Kharatyan, coordinator of DVV International, a German NGO working on reconciliation between the Turkish and Armenian people. "Without their intervention, there would never have been survivors."

Turkish historian Tanner Akçam, an exiled political refugee, recounts in his 2008 book A Shameful Act the story of several regional governors who, refusing to obey Istanbul, saved millions of lives.

Celal Bey, governor of Aleppo, opposed orders of deportation that would have led Armenians to their deaths. Dismissed from office, Bey was transferred to the Anatolian city of Konya, where he again refused to obey orders, while trying to warn foreign diplomats about the events about to unfold. In his Memoirs, published by the newspaper Vakit in 1918, the official wrote: " My situation in Konya is one of a man, without any means, sitting along a river where the blood of thousands of children, irreproachable elderly, desperate women, flows."

Other governors lost their lives for resistance. Huseyin Nesimi Bey, the kaimakan (governor) of the province of Lice, was murdered by henchmen of the central government as he was on his way to meet with the Ottoman administration in Diyarbakir. These executions happened with the blessing of those in power, sentencing to death anyone in the Ottoman Empire who would "bring help to the Armenians," whether high officials or shepherds and soldiers.

To attempt to break the silence, a book was released in 2015 in Armenia. Greta Avetisyan collected testimonies from families. "For the 100-year anniversary of the genocide, marked in Erevan on April 25, 2015, I decided to collect memories from 100 families who were saved by Turks," the young Armenian researcher explained.

The Berberyan family lives in an old Stalin-era apartment in Erevan. A simple mention of the family's history is enough to spark debate. "We are called the Berberyan, which means "barber." It was our great-grandfather's job," says Naïra, who sits with her family around a table covered in cooked meals, dried fruit and goat cheese. "As the massacres had already started, the mayor summoned my great-grandfather, Harutyun, and drew a sign on his house so he wouldn't be killed. But the mayor only saved my great-grandfather because he wanted to keep his barber!"

It is true that back in those horrific days of 1915, many of the lives that were saved were for reasons that are not always mentionable. Some Armenian artisans and intellectuals, whose experience was useful, were occasionally spared. Hundreds of thousands of young Armenian women were forced into marriage and converted to Islam, children were adopted to make claim to the possession of their Armenian families. "The existence of modern Turkey is founded on a national idealism, Armenians were destroyed as a "race" because they were biologically dangerous for the "Turkish race" and were politically too liberal," explains French historian Vincent Duclert, an expert on the genocide.

The current president of Turkey, Recep Tayyip Erdogan, is continuing the policy of genocide denial. And since the failed coup of last July, state repression and clampdowns on free speech make the mention of these hidden Turkish heroes even more improbable, and any possible reconciliation with Armenia all that much harder: simply mentioning genocide risks years in prison in Turkey.

This state-driven denial hinders the research of historians, Turks and Armenians alike. The taboo is hard to get rid of in Armenia as well, for different reasons. "It's hard for an Armenian to acknowledge the role played by Turks because he will think it exempts Turkey from its responsibility in the genocide," admits Suren Manukyan, member of the Armenian parliament and former director of the Armenian genocide memorial in Tsitsernakaberd, near Erevan.

Still, he believes that the figure of the "Righteous among the Nations" is a way for the Turkish government to identify with their righteous kin from such a horrid chapter of the country's history. "It's a reconciliatory figure that can help Turkey acknowledge the genocide," says Lusine Kharatyan, who often confronts young Armenian and Turks about their pasts.

A ceremony in Yerevan, Armenia, marking the 102nd anniversary of the Armenian Genocide - Photo: Gevorg Ghazaryan via ZUMA

A first step was taken in 2015 with the creation, thanks to the initiative of a trio of philanthropists from the Armenian diaspora, of the Aurora Prize for Awakening Humanity to "honor the memory of Armenian genocide survivors by supporting projects honoring their saviors." This prize honors each year "those who take risks for the well-being of others and who embody the best of what makes us a global community," as described by Ernesto Zedillo, the former president of Mexico, who joined the Aurora prize selection committee in 2017.

In Europe, recognition of the Armenian tragedy is slowly taking root. In Germany, during the acknowledgement of the Armenian genocide by the Bundestag on June 2, 2016, the member of parliament of Turkish origin Cem Özdemir addressed the existence of the forgotten "righteous" during parliamentary debate. Mixing his German nationality and Turkish roots, Özdemir has a particular legitimacy that allows him to compare the Righteous among the Nations of the Shoah with Turks who risked their own lives to oppose barbarism. "In many cases, it was Muslim faith or their conception of humanity that would not allow them to obey Istanbul's orders. We have to honor their memory and the memory of Turkish heroes who refused to obey orders. They are the Turkish Schindlers."

But the passing of generations creates a fear that these quiet heroes will be forgotten, for Turks and Armenian survivors alike. In his house in Sologne, Jean-Pierre Fleury has not given up on finding the name of the man who saved his mother's life, even if chances are getting thinner each year.

"I never had the chance to know what happened, but I believe my mother's word : if I am here today, it is thanks to these righteous people. These men and women risked their lives for us. A hundred years of silence is enough."

After Sargsyan Resignation, What Next For Armenia-Russia Relations?

MOSCOW — Following a series of demonstrations against the political class that began across ...

Persistent poverty used to be quietly endured, but protests are rising against a political leader...