Hate And Fear: Weapons Of Choice In Today's India

The country's leadership is opening a Pandora's box by normalizing brutality and impunity.

I have been triggered into writing this short essay by three events. One is reading Mukul Kesavan's recent piece in the Telegraph saying that the terrifying thing about contemporary India is not the everyday violence against women, Dalits and other minorities or dissenters, but the formalizing and rationalizing of these actions into the highest levels of the law of the land.

The other trigger is the news of the burning of the victim in the Unnao rape-murder case on her way to court in Lucknow on Thursday, Dec. 5, by a group of men which included some of the accused rapists.

The third trigger, the most worrisome, is the Citizenship Amendment Bill (CAB), which the Lok Sabha passed on Dec. 9 and the Rajya Sabha too is likely to formally approve soon. This last development is procedural and formal, but it is yet another big step towards closing the gap between the fascism of law and the fascism of the streets in India.

The CAB is a brilliant way to target Muslims by failing to name them as potential citizens of India who are oppressed by neighboring regions, primarily on the grounds of their religious identity. By not including Muslims in this amendment, they have another door to justice closed to them. What is worse, the CAB is the loudest dog whistle by a ruling party since Indian independence, intended to declare Muslims as an open game for any form of degradation and destruction. 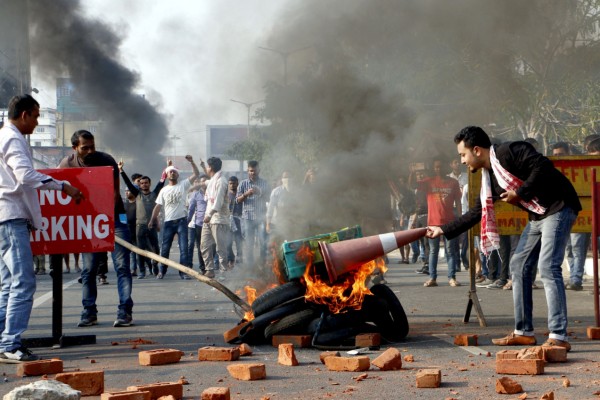 The Unnao victim's story, as well as the growing number of cases of everyday brutality with impunity, require us to make the link between everyday hatred and the dismantling of the constitution.

In the wake of the death of the Unnao rape victim, if India was anything close to a decent democracy, both Adityanath and Narendra Modi would have promptly resigned, along with their cabinets and all their political appointees, and there would be a national debate about elections, governance and change. But India is neither decent nor a democracy. What has India become?

The few remaining leaders in the world who can claim to have any commitment to human decency (Emmanuel Macron, Justin Trudeau, Angela Merkel, for example), should be calling for a change of regime, and the International Criminal Court should issue a major call for investigation and punishment. The UN should bar India's representatives from any participation in UN deliberations until they are held accountable for the new bar that India has set for in internal violence.

But none of these things is likely to happen, because India is regarded as too democratic to fail. If global institutions and other nations condemn India, what will do they do about Israel, Brazil, the Philippines, China, Turkey and many other statocracies? India has long benefited from this default view of its vibrant democracy, and it continues to do so.

Fear, anger, scapegoating and exclusion as the highest principles of civic and political life.

I have remarked before that India is not only following a global swing to the authoritarian right, it is an innovator. The innovation that is now being tried out in India is the successful closing of the gap between procedural fascism and substantive fascism. Procedural fascism is exemplified by the scrapping of Article 370 of the constitution in Kashmir, the National Register of Citizens process in Assam, the CAB and the recent Supreme Court ruling on Ayodhya.

In each case, the executive, the judiciary and the legislature have made fascism far more respectable than it ever was in India, at the highest formal levels. At the same time, the spate of rapes, murders, burnings, lynching, and other humiliations of women, Dalits, Muslims and children throughout India have raised substantive fascism to an unimaginable public level.

What is the source of the new compact between procedural (formal) fascism and substantive fascism, or to put it more simply, between the highest authorities in the land and the killers and lynch mobs that produce everyday brutality in India' cities, villages and neighborhoods?

One answer is impunity. If anyone in India today says or does anything that follows the BJP line on citizenship, security, patriotism, patriarchalism, or journalism or the BJP line on cows, statues, space travel, or women's place in society, they can rape, maim or lynch selected others anywhere at anytime. Impunity means the right to brutalize others with the near guarantee of no legal consequence.

Others have used the word impunity to describe the worst of India's current civic order and public life. But where does this culture of impunity come from?

First, from the utter cynicism of the top leadership of the BJP and their minions in all official institutions, at all levels. The second source is the extraordinary corruption generated by the alliance between corporate interests and politicians, indeed an old story in India but now characterized by a level of official indifference which is unprecedented: The scale of disappeared debts in the Indian banking system is one symptom of the new corruption.

The third factor is the thorough criminalization of the legislature, at all levels, with thugs, rapists and killers increasingly and proudly deliberating on how to shape the law of the land. The fourth force is social media, which allows for a new and sickening form of proliferation of pornography, in which poor men consume images of rape, murder and mayhem because it brings them "sukoon" (calm, peace), as one recent report shows us.

Normally, we associate the word aspiration with social and economic mobility, hope and legitimate social improvement for oneself or one's kin. But the Indian ruling party and the state elite have installed fear, anger, scapegoating and exclusion as the highest principles of civic and political life.

Thus, aspiration itself has been redirected away from better jobs, more economic security and greater social respectability towards a darker form of the revolution of rising expectations, in which the new role models are Muslim-hunting cabinet members, corrupt and sexually predatory saint-politicians and encounter-wise policemen.

When poor and marginalized men, or jobless or badly employed youth, or slum-confined casual laborers are motivated, mobilized and seduced by leaders of this type, who also offer them dreams of national and ethnic purity, they follow these examples in their own worlds, and hunt, maim and kill those to whom they feel superior.

Since they are guaranteed impunity (except in exceptional circumstances), the normal restraints of prudence, sanity and humanity are easily shed, especially when there is so little to lose. Aspirational hatred is hatred as imitation of one's betters, and in India's case, today's most powerful betters are the worst of the worst.

Hence, the most important link between procedural fascism and substantive fascism in India today is the absence of decent examples of leadership and decent models for mobility.

When we are ruled by thieves, killers and rapists, who enjoy and distribute immunity generously, it is no surprise that many begin to believe that hate, anger and the degradation of those who are even weaker than yourself, can take you nowhere but up.

*Arjun Appadurai teaches in New York and Berlin and has published widely on globalization and South Asia.

How is the pandemic panning out in the world's second most populous country? Science editor for T...

So far there's been little obvious effort to hold authorities accountable for the rising number o...