Erdogan v. Macron: Power, Faith And The Opposite Of Diplomacy

Things are heating up between Erdogan and Macron, leading to the recall of the French ambassador in Ankara. France's efforts in training local imams may thwart Turkey's policy of influence through religion.

ISTANBUL — Insulting French President Emmanuel Macron is definitely the new pet project for Turkish President Recep Tayyip Erdogan, who's been touring the country's central and eastern provinces to build his support. On Sunday, in a speech delivered in Malatya, in eastern Turkey, Erdogan for the second day in a row launched a vehement attack against his French counterpart, whom he accused of having a "problem" with Islam, and to whom he recommends receiving "undergoing medical examinations."

Reiterating comments made Saturday about Macron's mental health, the Turkish president declared, "He is obsessed with Erdogan, day and night." He had already recommended "mental health tests" for the French president. "What is the problem of this person called Macron with Muslims and Islam?" he asked in a speech to the delegates of his conservative Justice and Development Party (AKP), in Kayseri in central Turkey.

Judging these remarks "unacceptable," France took the rare step of officially recalling its ambassador in Ankara for consultation. The last time this had happened in the history of French-Turkish diplomatic relations was in 1901. The Elysée presidential office wanted to send a strong signal, adding in a communication that the Turkish leader "change the course of his policy because it is dangerous from all points of view."

French-Turkish relations are at an all-time low.

French authorities denounced a lack of condemnation or solidarity from the Turkish authorities after the terrorist attack last Friday north of Paris, when a French teacher, Samuel Paty, was beheaded by a fanatical Islamist for having shown caricatures of the Prophet Muhammad during a class on freedom of expression. Turkey's ambassador to France offered his condolences, the Turkish foreign ministry said Sunday.

The brutal killing went unnoticed in Turkey, where the official story distilled by the media revolves around "Islamophobia" and "fascism" in France. "France has recently launched a vast witch hunt against the Muslim community," wrote the daily Sabah, the mouthpiece of the government. Meanwhile, a false rumor is spreading on Turkish social media, according to which caricatures of the Prophet are projected on the walls of government buildings all around France. 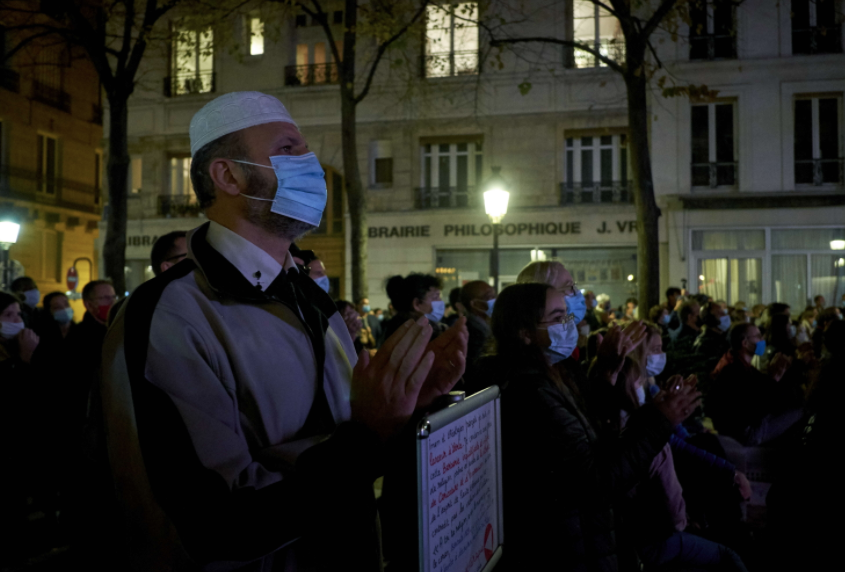 French-Turkish relations are at an all-time low. Tension has risen gradually over the months between the two presidents: first over the war in Libya, then over Turkish explorations in the eastern Mediterranean and recently over Ankara's support for Azerbaijan, which has gone to war again against Armenia for control of the Nagorno-Karabakh region. In all these foreign policy dossiers, the Turkish president plays the troublemaker, blowing on the embers of old resentments and conflicts that have not been properly extinguished. Erdogan often aims to assert himself as a global defender of Sunni Islam and oppressed Muslims.

The French president as a paragon of Islamophobia makes a convenient scapegoat for Erdogan, and an easy way to boost his popularity domestically. These days, he needs it. According to the opinion research institute Avrasya, if the presidential election, scheduled for June 2023, were to be held now, Erdogan would get 38.7% of the vote — compared to 41.9% for his main rival, Ekrem Imamoglu, the mayor of Istanbul. The economy is tanking and the president's beloved cultural revolution project is a failure. He acknowledged this when he inaugurated the campus of the Ibn Haldun University in Istanbul on Friday, Oct. 23: "In the fields of education and culture, we have not succeeded in forwarding our ideas," he said. His disappointment was directed at journalists: "Our media does not reflect our voice."

They castigate France as a "colonialist" and "racist" country.

Yet most government media faithfully report the thoughts of the "Great Man," one of Mr. Erdogan's nicknames. They join in continuously in castigating France as a "colonialist" and "racist" country where Muslims are persecuted in the worst way. Seen from Ankara, this persecution resembles "the demonization of European Jews in the 1920s," as Fahrettin Altun, the director of communications for the Turkish presidency, recently tweeted. Altun added that "Europe is an increasingly dangerous place for Muslims."

Implicitly, the Turkish authorities have not digested the fact that Macron seeks to strengthen control of Muslim places of worship on French soil, having also decided to end foreign imams and preachers coming to France. Turkey is the foreign country with the biggest influence on Islam in France, since it alone sends half of the 300 imams that come from abroad. It fears it will lose its influence if a proposed law on reinforcing secularism in France is passed. The Turkish-Islamic Union for Religious Affairs, financed by Ankara to promote Turkish Islam abroad, risks losing its goodwill. The French president's speech in Les Mureaux on Oct. 2 and his allusion to "Islam in crisis" particularly unnerved Erdogan, who had called it an "abuse of power." That is a syndrome the Turkish president knows well.

COVID-19 shook up the world of work last spring. Since the virus (and lockdowns) returned this fa...