For many, getting back to "normal life" means going out to eat. But people also want to be safe, which is why eateries — from Amsterdam to Australia — are experimenting with distancing innovations that might soon become the new normal in the field of gastronomy. So how will dining out look like in the post-pandemic world? Here are few glimpses:

• In Saxony-Anhalt, Robin Pietsch, the German state's only starred chef, is thinking about setting up small "greenhouses" in an open space at Wernigerode Castle, the German daily Die Welt reports. Each glass cubicle would accommodate two guests and protect them from other diners, and yet still allow them to appreciate the surrounding scenery.

• Pietsch says he was inspired by the "separated greenhouses" that a vegan restaurant in Amsterdam set up on the waterfront and tested earlier this month. The restaurant should reopen for the public in the beginning of June with other Dutch restaurants and terraces hosting up to 30 guests, reported NH Nieuws.

• Unlike its European neighbors, Sweden never enforced a lockdown, and bars, restaurants and cafés continue to serve seated customers, albeit with certain precautions in place. Many establishments decided, for example, to rope off every other table to make social distancing easier. But that's nothing compared to the approach taken by a new restaurant called Bord för En (Table for One), which opened two weeks ago serves just one customer per day, seated at a table in the middle of... a field! Not only that, but food is served in a basket attached to a rope. Offering seasonal and locally farmed food and drinks, the restaurant's owners also have a novel approach when it comes to the bill: It's up to the guests to decide how much they're willing to pay. "We're all facing difficult times," the restaurateurs told the Insider.

• The proprietor of a seafood pub in Ocean City, in the U.S. state of Maryland, have also found a creative way to keep business afloat while maintaining social distancing. Customers at Fish Tales, which is reopening its dine-in services, will once again be allowed to mix, mingle and much, but with one condition: They have to wear giant inflatable inner tubes on wheels. These "bumper tables" are six feet wide, and according to UJ City News, the owner intends to fit 40 to 60 of them inside her restaurant. 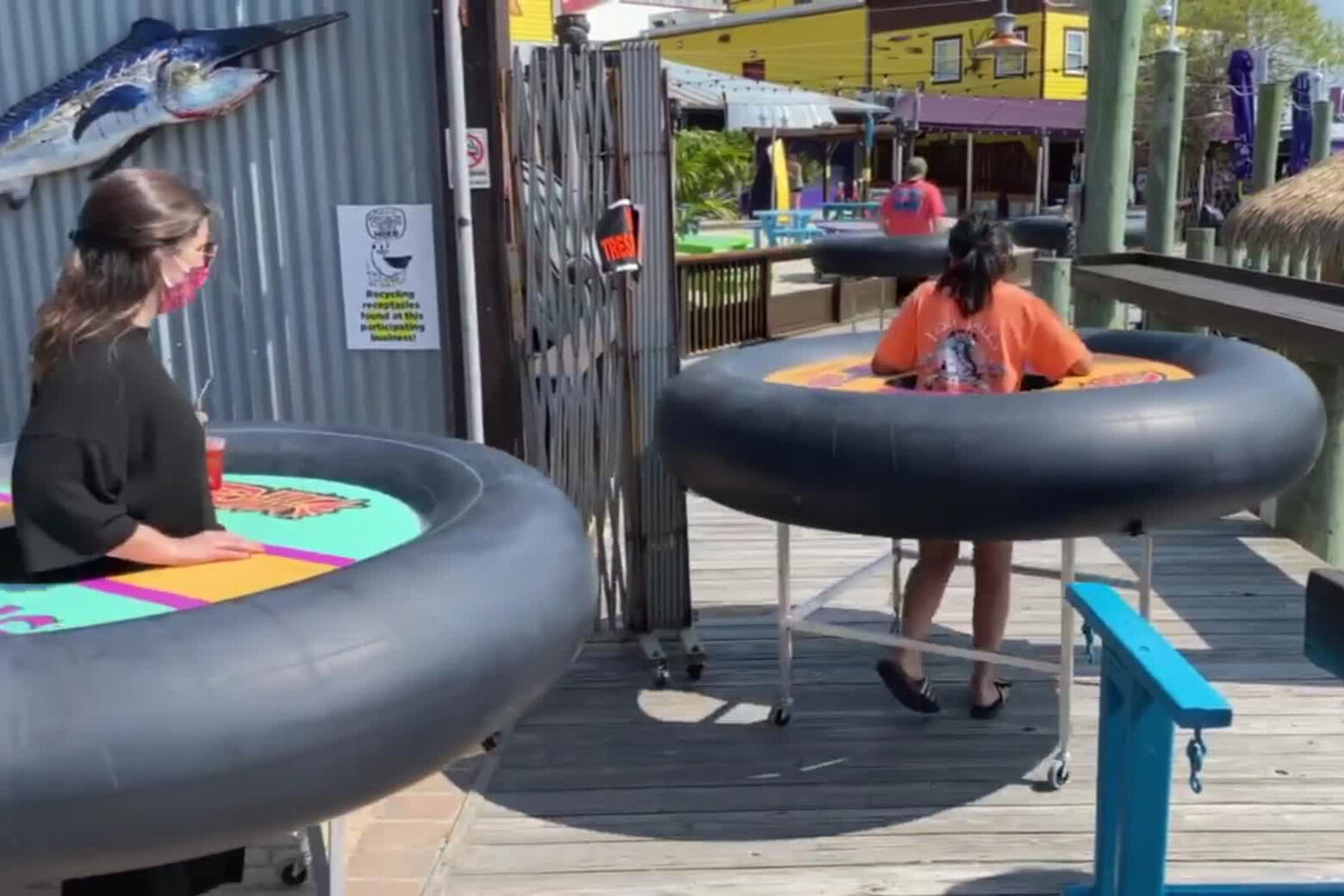 • A café in northeast Germany came up with a similar idea, only instead of inner tubes, customers use swimming pool floats (water noodles) to maintain social distancing. The 1.5-meter-long noodles are attached to hats that customers at Rothe in Schwerin, as the café is known, don while dining, Euronews reports.

• In Spain and Italy, some restaurants plan to reopen with plexiglass screens separating tables or even individual diners. One restaurant in the town of Leganés has already installed the prototype screens to test the design, reports The Local. As part of a pilot test, it has also set up thermal cameras that detect the temperature of diners.

• In New South Wales, Australia, in the meantime, restaurants are back in operation, but with strict limits on the number of diners allowed. Eateries can serve no more than 10 people at a time. Concerned that some clients might find the relative emptiness a bit off putting, the owner of one Sydney restaurant came up with a crafty solution: Why not fill the empty chairs with cardboard cutouts? And because the faux customers can't, of course, talk, the proprietor also outfitted his establishment with recorded background noise that simulates the chatter of clients, 7 News reports.

•A restaurant in Bangkok, Thailand had a similar idea, but instead of cardboard customers, decided to go with stuffed panda dolls. Different strokes, as they say, for different folks.

Greta! Will COVID-19 Make Or Break The "Climate Generation"?