When A California Boy Discovers Bear Bashing In Rural France

PAU — Not far from this southwestern French city, up in the snow-capped Pyrénées mountains that tower in the distance, there are bears. Still, even the most intrepid human adventurer would be hard pressed to ever spot one.

Researchers believe there are only about 40 of the omnivores in the entire, 490-kilometer long Pyrénées range, along the French-Spanish border. And in the portion that includes Pau — the once sovereign state of Béarn in what is now France's Pyrénées-Atlantiques department — there are just two, both of them males.

Little wonder the Pyrénéan brown bears (Ursus arctos) all have individual names — cute and fuzzy ones like Pepito, Bulle and Plume. There was even a Balou, "godson" of French actors Gérard Depardieu and Fanny Ardant, but he died in 2014. Word has it that he was struck by lightning, though like pieces of this tale, the precise facts have never been confirmed.

What we do know is, according to scientists, is that at least 80 of the furry creatures would be needed to make it a "viable" population to avoid eventual extinction. For obvious reasons, the situation is even more precarious for the two lonely Béarn bears, a father and son, apparently, and both decedents of Cannelle, France's last indigenous female bear, killed illegally by a hunter in 2004. The other females present in the Pyrénées were either introduced or descend from bears introduced from Slovenia.

For the sake of bears' reproductive necessities, French Environment Minister Nicolas Hulot announced in late March that the state wants to fetch two more Slovenian bears — females — and release them in the Béarn this coming autumn. "I don't want to be the minister who stood by while this line [of bears] died out," Hulot, a former wildlife presenter on television, told the daily Le Parisien.

I, for one, am hoping the match-making experiment works, that Néré and Cannellito — the two surviving Béarn boys — meet their future lady loves and, you know, do it like they do on the Discovery channel. May they live long and prosper, and populate their neck of the woods with bouncing baby bears!

My warm and fuzzy wishes, as it turns out, are not shared by all. In the area's valleys, many sheep and cattle farmers strongly oppose the presence of bears. Some hunters, beekeepers and even hikers agree with them, and want the government to send the bears back from whence they came — to Slovenia's Kočevje region. And as far as new introductions are concerned, pas question! (no way), the anti-ours (anti-bear) crowd insists. 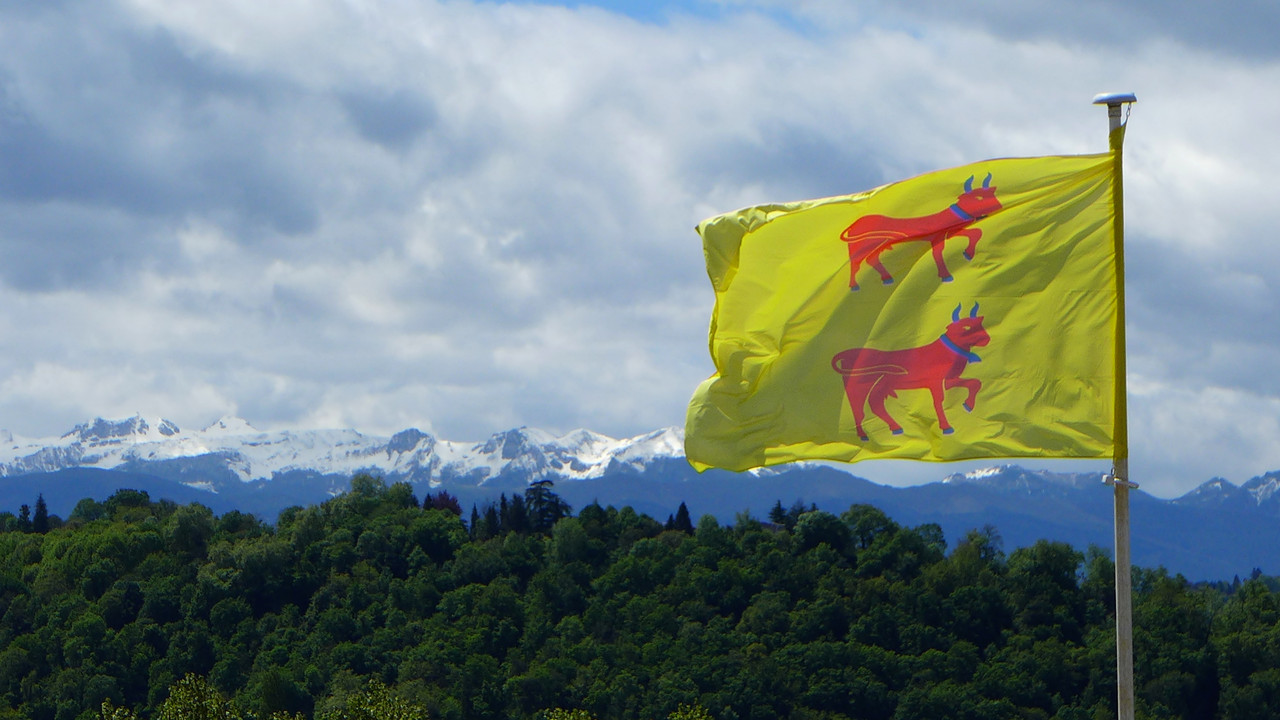 "Wild animals and domestic animals don't mix. It doesn't work. We don't want that," Patrice Marie, a middle-aged shepherd from the Vercors area, in the foothills of the Alps, told me in the parking lot of the Pau train station. "We defend our right to live off the work we do, and not be attacked, not be mistreated. It's like if someone goes to work every day and people keep lighting his car on fire. That's wrong. The people who do that are criminals. For us, the wild animals are the criminals."

Never mind that where Marie lives, in the southeastern Drôme department, there are no bears. But there are wolves. And it's "the same thing," the sparkly-eyed shepherd, with his friendly demeanor and rustic black beret, insisted. "For us it's hell," he said. "We're forced to watch our animals 24/7. We don't sleep any more. It's a life of stress. We have to have guard dogs. We need to be armed. It's not a pleasant life. We're at war when it comes to these wild animals."

Marie was one of an estimated 1,200 people — along with a couple of horses and at least 100 sheep, goats and cows — who made their way this past week to Pau, the administrative capital of the Pyrénées-Atlantiques, to make their voices heard and tell Mr. Hulot to scrap his bear-introduction plan once and for all.

Carrying signs, walking sticks and cowbells, the demonstrators snaked their way through the hilltop city, ably shepherding their livestock from the train station, down below, to the entrance of the city center's departmental administrative offices. There they unrolled a huge bail of hay, which the animals munched on while organizers gave a series of fiery speeches lambasting Hulot and his environmentally minded initiative. As a final touch, someone lit the half-eaten hay on fire.

The overall atmosphere was convivial, a boisterous but friendly celebration of paysan pride. But toward the end, as the rhetoric heated to a fevered pitch — one speaker likened the government's reintroduction program to Jurassic Park — it started to seem just a wee-bit over the top. All this hoo-ha over a plan to plant just two bears in an area covering thousands of square kilometers.

But of course this is my perspective visiting from Montpellier, the midsized French city where I sleep well knowing that neither myself nor my livelihood will have any unpleasant encounters with the wild animals. I also happen to hail from a country, the United States, with tens of thousands of bears, and grew up in a state, California, that features a grizzly bear (though they no longer exist there) on its flag. The Béarn flag, I realized, has a pair of cows on it.

No one I spoke to in Pau has had any ill-fated run-ins with bears either, which isn't surprising. There are only 40 of them after all. Javier Bernal, a young cattle farmer, came all the way from the Broto valley, across the mountains in Spain, to show "solidarity" with his "French comrades." He hasn't dealt with any bear attacks "yet," he told me. "Because in our area there aren't any." One never knows, though. Perhaps the Béarn bears will mate, as Nicolas Hulot is hoping, and mount an eventual cross-border invasion. 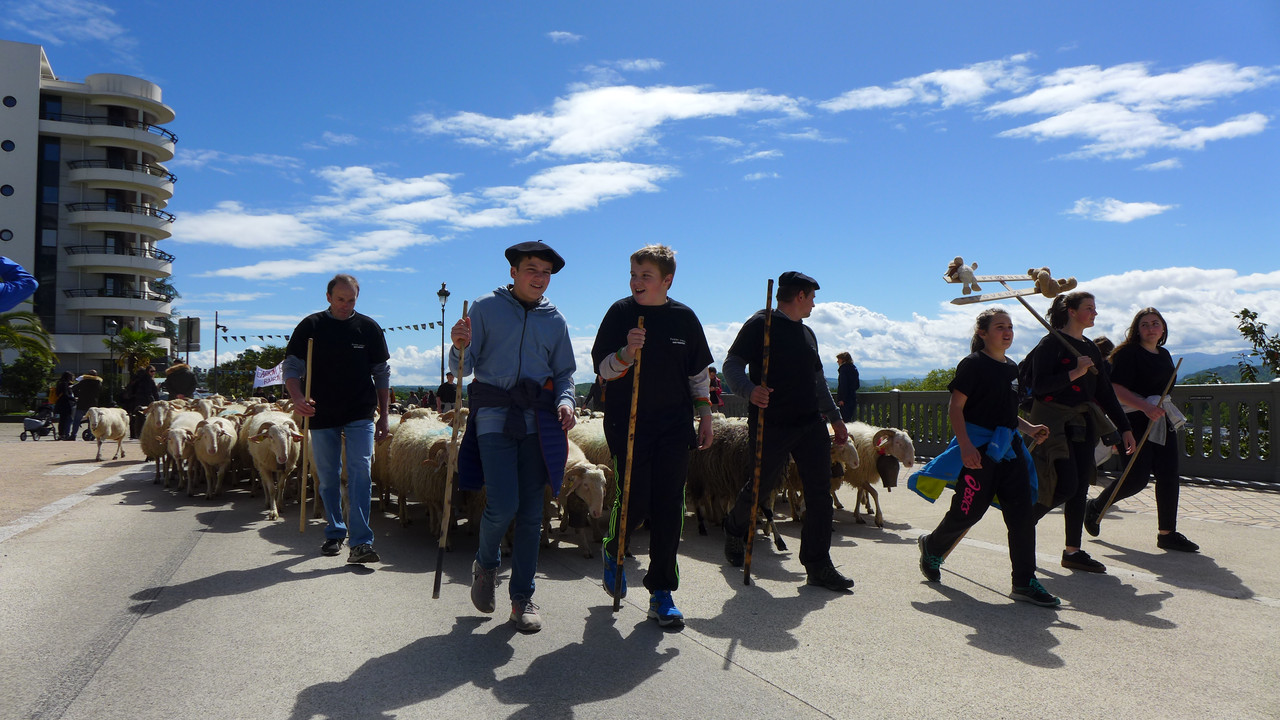 Still, there have been attacks elsewhere in the Pyrénées. Bears like to eat berries, honey and insects, but they'll also go after a sheep if they're hungry enough. And sheep scare easily, with potentially fatal consequences given the tricky mountain topography. Last summer, a bear attack along the border caused more than 200 panicked sheep to plunge off a cliff. Farmers aren't allowed to retaliate. Hunting bears is illegal in France. But the French state does offer compensation for lost animals.

Yelling into the microphone at an ear-spitting volume, cow bells clanging in the background, Patrice Marie took the stage toward the end of the Pau demonstration to spell out his vision of a grand, cross-country march on Paris — perhaps with participants from Spain, Italy, Germany and beyond. "We'll tell the whole country who we are, that we're proud people, alive and well, descendants of defenders of the mountain territories."

Even if Marie's European-wide march does get off the ground, don't expect there to be the "millions" he envisions. To me, it's all just wishful thinking. But as I turned away from the stage, I caught the eye of another middle aged, beret-wearing man. Visibly moved by Marie's speech, his eyes moist with tears, the man gave me a slightly embarrassed half-smile. I immediately responded in kind, as if to say, "I understand." Except I don't. Time, perhaps, for a city slicker like me to head home.