On The Trail Of Invisible Bears Wreaking Havoc In The Pyrenees

VAL D'ARAN — It wasn't until I'd made may way clear through to other side of the village that I finally crossed paths with another human: A man about my age returning from a walk in the hills with his dog.

"The only thing I can tell you is that up along the road, after the bend and then further along where it winds back, there's a water source. That's the last place they saw him, a few days ago," he told me when I explained the purpose of my visit.

"Be careful," the man added with a smile.

Down below, clustered on the valley floor, the rooftops of the area's largest town — Vielha e Mijaran — shone steely grey. Above and all around, green hills glowed as the slanted, September sun climbed through a thick belt of forest cover before merging into the mountain peaks, partly entangled in drifting clouds.

Mont, the hillside village I'd just traversed in the Val d'Aran (Aran Valley), in the Spanish Pyrenees, was eerily quiet. Before meeting the man with the dog, the only signs of life I'd encountered were a young cat, sitting upright in a patch of sunshine, and a lazy "patou" (Pyrenean mountain dog) stretched out alongside the wheels of a red car.

On the dirt road leading up and out of town, things were quieter still. I didn't pass any cars, and if there were other hikers about, I didn't see them. But after the first bend, I came across a clearing containing a large rectangle of high, electrified fencing fixed with a yellow sign reading "Atención! Abejas" — watch out for bees. 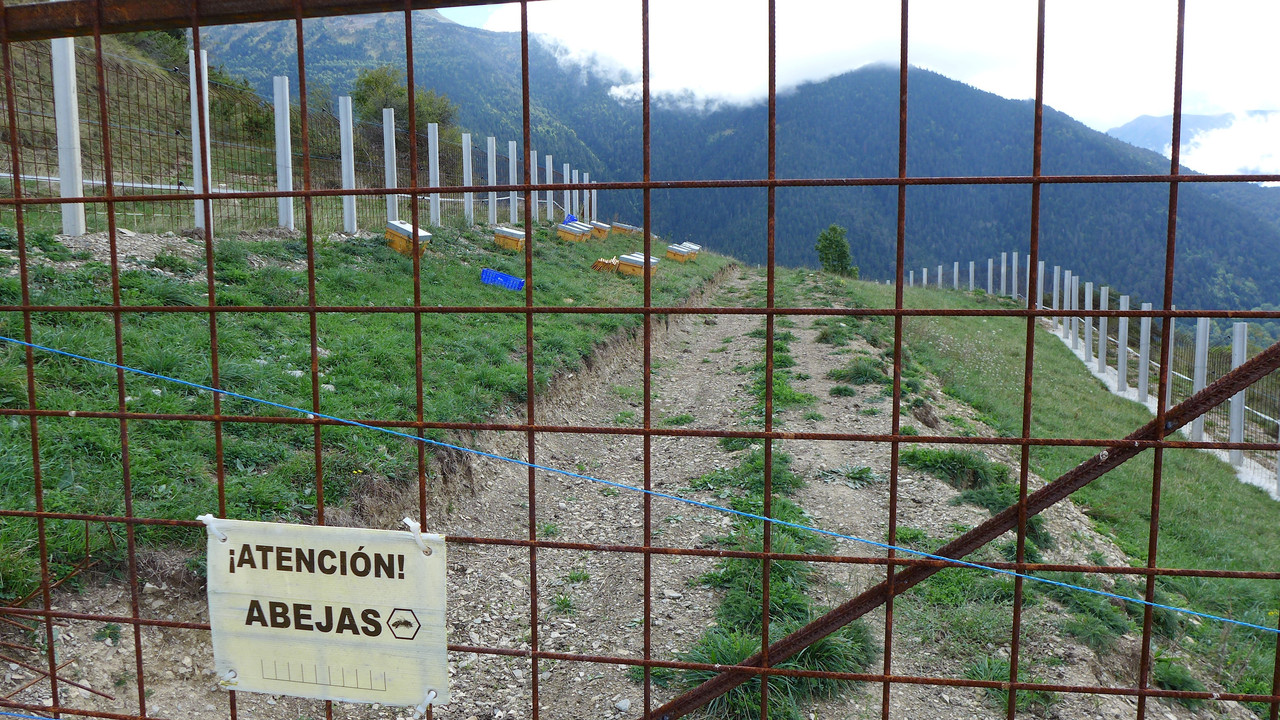 The words were a warning for people, obviously, but the high-voltage fence — as I'd just learned during a two-day conference held in the next valley over — was there to deter another kind of creature.

The conference, organized by members of an EU-backed conservation project called PirosLife, was on the topic of large carnivores. And while there were several talks about wolves — and one on the endangered Iberian lynx — the primary focus of the event was the Eurasian brown bear (Ursus arctos arctos), a cousin of the American grizzly.

In the Pyrenees Mountains, the species was hunted almost to extinction by the end of the 20th century. But thanks to the strategic reintroduction of bears brought in from Slovenia, the animals are now making a modest comeback.

Researchers estimate that there are perhaps 50 bears here, mostly in the central part of the range in the French department of Ariège and, on the Spanish side, in areas like the Val d'Aran. Whether that's enough to make the population "viable" — self-sustaining, in other words — remains to be seen.

Eating horses isn't a normal thing for bears. They tend to be vegetarians.

Conservationists worry about inbreeding, as a large portion of the bears are thought to be descendants of a single male, Pyros, who was introduced from Slovenia in 1997 and is now presumed dead.

Another threat to their survival is opposition by French and Spanish livestock farmers, whose animals are sometimes attacked. Breeders and their allies were particularly peeved last October when French authorities followed through on plans to introduce a pair of female bears into the western Pyrenees, an area that, until then, had harbored just two bears, both of them male.

Bears are known to go after sheep, sometimes killing large numbers inadvertently by causing flocks to stampede and subsequently fall to their deaths in the treacherous mountain terrain where breeders send them to graze in the spring and summer. More surprising are the attacks over the past two years on horses.

"Eating horses isn't a normal thing for bears. They tend to be vegetarians, or go for smaller animals," Guillermo Palomero, head of a Spanish NGO called Fundación Oso Pardo (Brown Bear Foundation), explained in an interview last year with the radio station COPE.

And yet, in a development that drew no small amount of media attention, a large male bear named Goiat was implicated, starting in 2017, in multiple horse attacks. More perplexing still is that Goiat — who was introduced three years ago on the Catalan side of the mountains to give the bear population some much needed genetic diversity — isn't the only Pyrenean brown bear with a taste for horse meat. 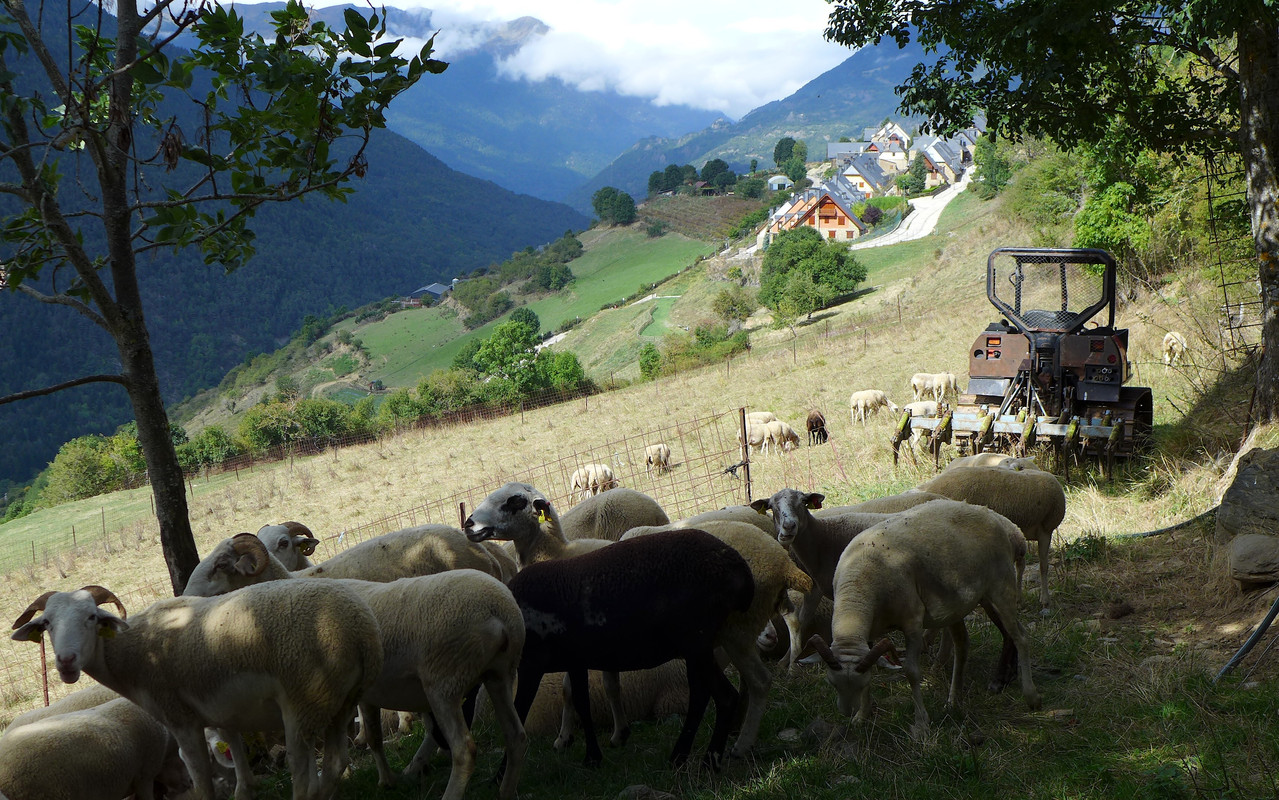 Starting in early September, another male bear whom researchers hope will help diversify the gene pool, began a series of late-night attacks that, to date, have claimed five horses. The attacks occurred in the hills around Vielha e Mijaran, and at least one took place just outside of Mont, the Barcelona daily La Vanguardia reported.

Together, the killings have prompted the Val d'Aran's administrative head, Francés Boya, to call for the animal's removal, a possibility that Palomero — arguably Spain's best-known bear advocate and a guest speaker at the PirosLife conference — isn't entirely opposed to.

A field researcher I spoke with during the event explained that "removal," in this case, could mean either placing the animal in some kind of established bear refuge, or killing it.

The bear in question, Cachou, was born in the Pyrenees four years ago but was fitted with a GPS tracking device just this past May. It was to him that I turned my thought as I continued along the road leading up into the hills from Mont, past the bee boxes in their electrified enclosure, and into the woods.

The bear causes me damage. He screws me, but I'm not against the bears.

Up and around the next bend I noticed, on my left, what looked like an overturned tree trunk, but raised up off the ground to about waist height. Upon further inspection I realized that it was hollowed out, and filled with water that trickled out along the front end, through a layer of spongy moss.

I realized suddenly that this was the water source the man with the dog had mentioned. It also hit me how utterly alone I was on that shadowy and silent bend in the road. Had one of the residents really spotted Cachou at this very trough? Behind the water source, leading into the woods, the tall grass looked trampled. Could the bear have done that?

I looked around for print marks, and examined the bark of a nearby tree to see if perhaps Cachou had left a tuft of hair — the kinds of clues I'd heard experts talk about during the previous day's "large carnivore" conference. Needless to say, my untrained eyes didn't uncover any evidence. 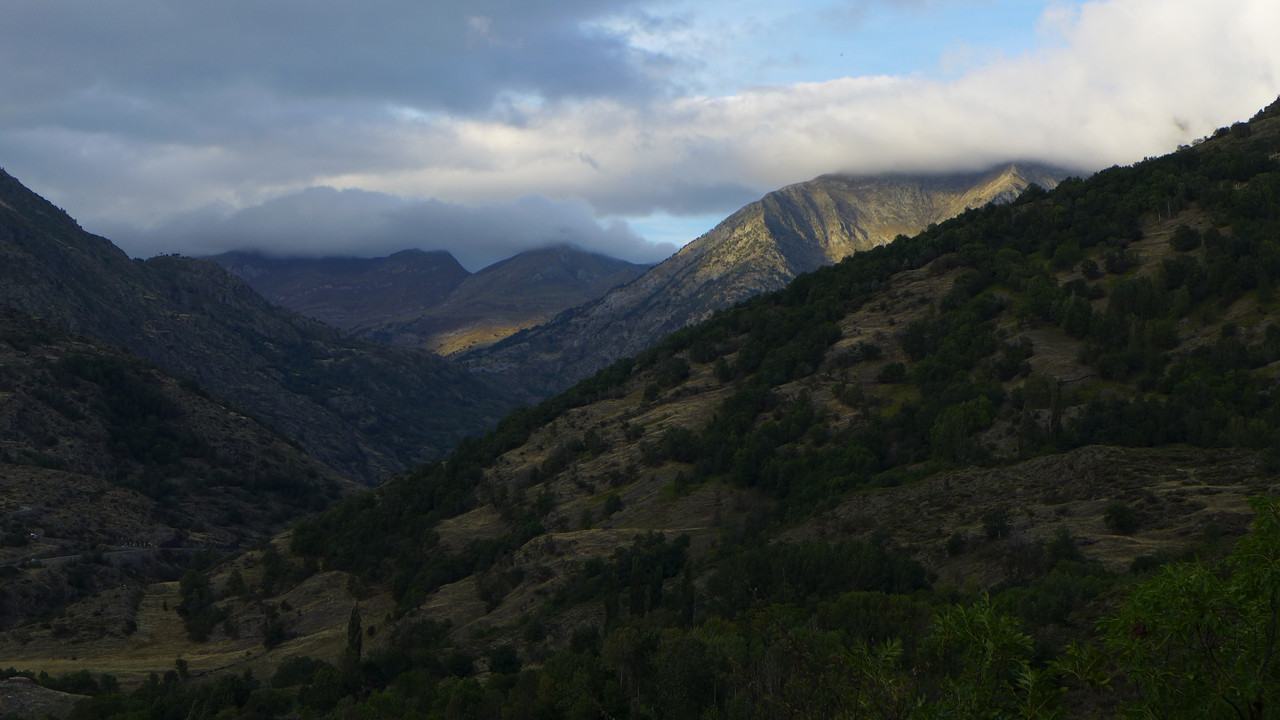 The rational part of my mind knew from the beginning that I was unlikely to see any trace of the bear. There are just 50 after all, in a mountain range that stretches for 500 kilometers. But wait, what was that? The crack of a branch somewhere caused me to jump and swing around. Nothing. I caught my breath, and began heading back down the road toward Mont.

Back in the village, a middle-aged man named José Luís acknowledged that Cachou is "causing a lot of damage" to livestock and said that while bears presumably try to stay clear of humans, the animal's presence is "worrisome — we don't know what kind of behavior he'll have."

Still, José Luís said he supports the animal's right to be in the Pyrenees: "It's just something we have to live with." A few blocks away, a young man named Santiago expressed approval of how authorities are trying to scare the bear off, even using rubber bullets if they have to. "I think how they're managing it is good," Santiago said.

His friend Aran had a more measured response to the situation. She said she understands both sides: the conservationists who want the species to live and prosper in the Pyrenees, and livestock breeders who are being hurt economically and say that coexistence with the bears simply doesn't work. "The majority of people who have livestock are against the bears," she said.

Authorities are trying to scare the bear off, even using rubber bullets if they have to.

A few meters down the road, I watched a man named Manel load manure into the back of wagon while his large patou sat nearby eyeing me suspiciously. Reluctantly, the farmer — who told me he also owns several restaurants — agreed to speak with me, first shouting from a distance, but eventually approaching the fence where I'd been observing him to continue his diatribe against everyone and everything from the "crooked" leaders of Spain, Catalonia and Brussels — "they're all liars and thieves" — to the "so-called environmentalists who are really just politicians."

"I'm one of the people who's been hurt economically by the bear," Manel explained. He said he's lost numerous lambs in the past two years and, because of bear attacks, can no longer let his sheep graze in the hills above the village. I also discovered that Manel owns the heavily guarded bee boxes I'd seen.

Surprisingly, though, he isn't against the bears. "I'm an ecologist. I like animals," he said. "The bear causes me damage. He screws me, but I'm not against the bears. They're the future for this area," Manel added. "I'm going to name my honey after him — Cachou Bear Honey — to make more money."

In the race to to find a cure, scientists are rushing to release their study results. There are d...

Sexuality And The Pandemic: Can We Go Back To Getting It On?

The jury's still out on whether COVID-19 can be transmitted sexually. But there's no doubt that i...