A Religion Class Curse: Why Italy Is Still Not A Secular State

MONTE CASTELLO DI VIBIO — "Sei la figlia di Satana! Gesù non ti ama!" It was 1989 and I was 8 years old — and my teacher was screaming at me in front of my classmates, telling me I was Satan's daughter and that Jesus didn't love me.

I had been looking forward to my first religion class at the public elementary school in my hometown just outside of Naples, Italy. I liked school — some would say I was a nerd, but the point is that I was curious. When the teacher for this new class showed up, she was smiling. Almost right away she asked if there was anyone not studying for the first communion. I knew there were two other students besides me who didn't attend Catholic catechism: Viviana, a Jehovah's Witness, and Rudi, who my parents had explained to me had a Marxist father. But neither raised their hand. I did right away, and it took me a moment to realize that I was alone with my hand up.

I must have been eager to find out what all the other kids had been learning after school — yes, always curious. But then, for the better part of the next hour, there would be nothing to enlighten me: the teacher berated and lectured me, apparently using me as some kind of lesson prop to make her point. Even then I understood there was something very wrong with it — it was what I later learned to call fundamentalism. All in the setting of a public school classroom.

The bitter lessons of that day came back to me recently as I read in Italy's daily La Stampa about a proposal to scrap Catholic religion teaching in state schools — 90 years since it was made compulsory by a treaty between the Fascist regime and the Vatican. Back on June 7, 1929, the Kingdom of Italy and the Holy See signed the so-called Lateran Treaty to recognize Vatican City as an independent state. Benito Mussolini was Italy's prime minister, and — trying to win over the Church's support for his Fascist regime — he conceded favorable conditions. Among other things, the agreement established Catholicism as the state religion and made the teaching of the religion compulsory in schools.

The teacher was picked by the Church but paid by the state.

When Italy became a republic after World War II, the Lateran Treaty was recognized in the Constitution as the pact that regulates the relations between the state and the Catholic Church. In 1984, a new "concordat" was signed, eliminating the clause that established Catholicism as the state religion, and making it possible for parents to choose whether their children attend religion classes. That was just five years before my encounter with the screaming teacher, who — like every other religion teacher — was picked by the Catholic Church but paid by the state. This is another tricky part in the religion teaching: These teachers don't pass any of the regular tests to check their knowledge or their capability or fitness to teach or to be with children.

My schoolmates had started going to catechism — afternoon classes taught in the local church to prepare kids for their first communion — already in third grade. Although I come from a Catholic background, my parents are not practicing, and it was ultimately up to me to decide if I wanted to pursue catechism. I'd wanted to try, but after one class with a priest who didn't let us ask questions, I opted out.

At my state-run school in Portici, in the outskirts of Naples, with some 30 of us in a classroom, I thought I'd have another chance to ask questions on that first day of religion class. I had no idea that, well, all hell would break loose. The teacher first calmly asked why I didn't go to catechism. I answered with some details, always the good student. And then it started, out of nowhere. "You are Satan!" she screamed. "Jesus doesn't love you! You still carry the original sin! Daughter of Satan!" I was baffled, and mortified. Nobody talked, as the woman's rant continued, muddling up all sorts of religious information. 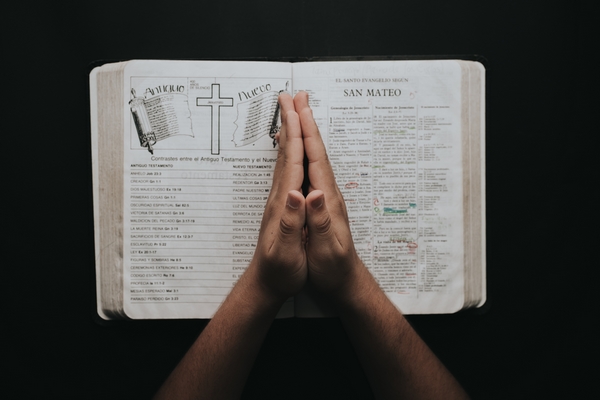 Confusion around religion often comes from the most devout — Photo: Luis Quintero

Recently, I attended a panel by Tom Heneghan, a longtime religion correspondent at the Reuters news agency, where he explained that the confusion created around religion, and even the basic rules, often comes from those who are the most devout. That too brought me back immediately to that classroom in Portici.

Indeed, in the years since, I have taken the time to learn about Catholic rites, and the sacraments that make you a Catholic. The first is baptism, which is how the original sin is washed away — differently from what the teacher told me. The First Communion has a completely different role, as it is when people join in the sacrifice of Christ by partaking of his blood and body.

Now, at age 37, I can imagine all sorts of creative answers for that awful teacher involving reflections on blood and body, but at the time I was silent and endured the class stoically.

When I got back home, I told my mother everything. She was furious. Oh, so furious. She ran straight to my school, screamed at the principal and whoever was there to listen and pulled me out of religion class.

Some would tell me I'd never be able to get married without my first communion.

From then on, once a week, I would stand up and walk out when the woman showed up, following my regular teacher into an empty room where we would learn about the history of architecture in Naples. But there were other consequences outside the classroom. My schoolmates stopped inviting me to their birthday parties and, later, I was left out of the celebrations of their first communion. Some would even tell me I would never be able to get married without my first communion. Others would taunt me by repeating the teacher's catchphrase: God doesn't love you.

Today, Italy is officially a secular republic, and all religions are equally free before the law, according to our Constitution. Still, the effects of the Lateran Treaty are everywhere. It may help explain why, according to a 2018 study by the Pew Research Center, it has the largest proportion of people who call themselves practicing Christians in Western Europe, at 40%. But whether people go to Mass or what they tell pollsters doesn't bother me. It's what happens in the public space that I care about.

Over the past year, since the anti-migrant League quickly grew into Italy's number one party, there has been a lot of debate about the secularity of public schools. Politicians from the League even proposed a draft bill last year to make crucifixes compulsory in schools, hospitals and even ports — with fines of up to 1,000 euros in case of non-compliance. The bill was not approved, but the issue pops up all the time.

My own personal "day in hell" was the consequence of a complicated political agreement almost a century ago, and the simple fact of geography, with the Vatican so close to the seat of our government. This year, a group of politicians in Parliament proposed a change to the concordat so that Catholic religion teaching be substituted by a compulsory hour of civic education. But the petition has little traction, and it is unlikely to be approved.

It has been 90 years since the Lateran Treaty, and 30 years since my devilish encounter with religion in the public classroom. But right now, I'm counting six years until my son will be starting elementary school — and I fear that change won't happen soon enough.

MILAN — In March, the first coronavirus outbreak in the West put Italy's hospitals under ...