Participants in a BLM march attach a pro-Biden sign to their van in Palm Beach, FLA. - Damon Higgins/Palm Beach Post/ZUMA

The protests, pandemic and poor U.S. jobs numbers all seem to spell trouble for President Donald Trump. But his challenger has a few disadvantages of his own.

MEXICO CITY — In democracies that allow for reelection, the incumbent enjoys obvious advantages. And yet, I'd venture to say that in the upcoming U.S. presidential election — granted it's still several months away — challenger Joe Biden is in the driver's seat, provided of course that he doesn't blow it, which is a big if.

Biden is the Democratic nominee in all but name, in large part because the party's establishment decided that only a moderate — someone who can win over the political center — will be able to beat President Donald Trump. At the same time, he doesn't have the strongest track record when it comes to elections outside his (tiny) state: Delaware. He ran twice before for president, in 1988 and again in 2008, but dropped out early both times, mainly because of his gift for the gaffe, especially when addressing the press.

Inside his party, he began the election process trailing the more leftist Bernie Sanders, and his challenge now will be to clinch the Sanders voting base — which tends to consist of younger, more politicized electors — without losing the center.

Elections have two parts: the candidates and the context. And in this particular contest, President Trump has three big advantages and one, enormous disadvantage.

Biden's challenge now will be to clinch the Sanders voting base without losing the center.

The first advantage is incumbency, with all the benefits that entails, including resources and, unlike the divided Democratic camp, no internal competition. The second, which is particular to him, is that he can use and manipulate his hordes of supporters to control primary election processes for Senate and House candidates. Typically, only a small number of the most motivated party members vote in primaries and among Republicans, these are precisely the people who see Trump as a star, similar to the way backers of Sanders feel on the Democratic side. The third advantage is a Republican party that is drifting and lacks a clear political project other than keeping power.

His disadvantage is the timing of the election — against the backdrop of a pandemic, a recession, widespread protests and heightened job losses. The latter, in particular, tends to have a huge impact on the likelihood of reelection.

Biden has his own advantages, along with some equally pronounced disadvantages. The first advantage — and one that is of superlative value among the country's more "modern" sectors — is that he isn't Trump. Indeed, it seems that with the exception of his immediate family members, nobody really cares about Biden. They seem him, rather, as a means to an end: a vehicle, in other words, for getting rid of President Trump. This provides Biden with an enormous opportunity, but also makes him an easy target.

The second advantage is that he can count on an energized party eager to beat Trump. But that party is also divided between those with a progressive agenda — the Sanders/Elizabeth Warren base — and those who believe moving to the center is the only way to win over independent voters. These are often termed 'Reagan Democrats," people who used to vote Democrat but switched sides out of concern that the party moved too far to the left. The fear is that if Biden leans too much to the progressive side, they'll be dissatisfied with both candidates and may even stay home on polling day. 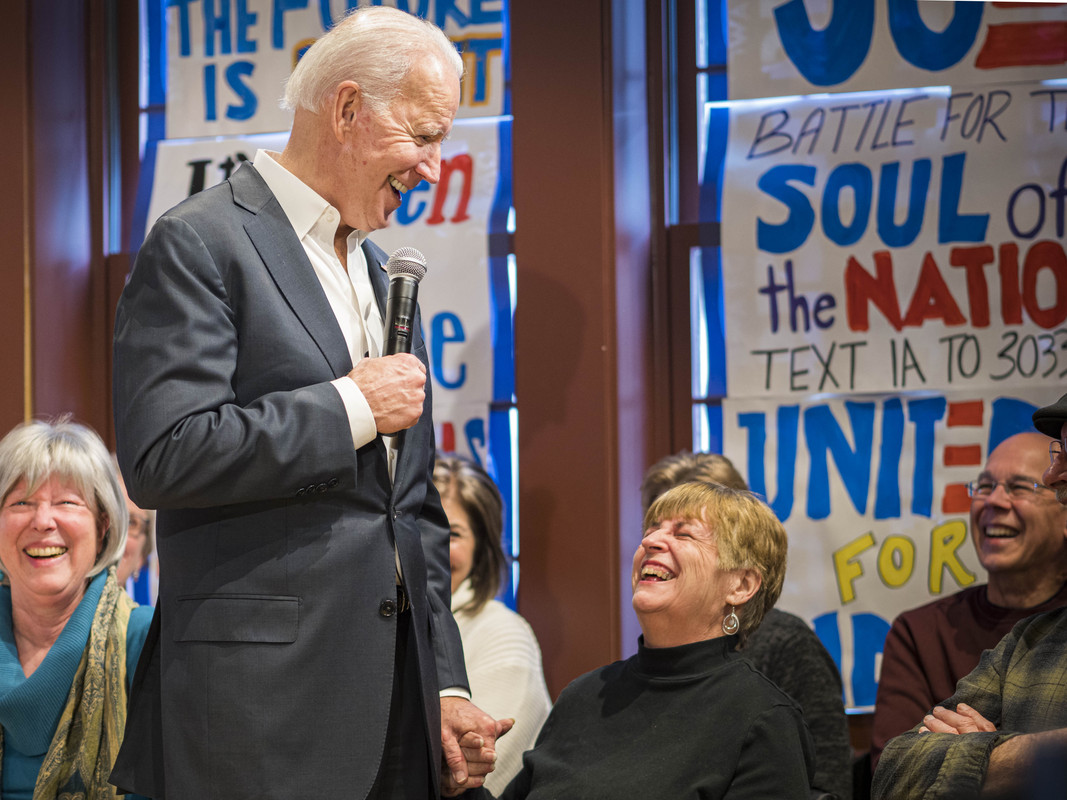 Joe Biden jokes with a woman at his campaign event in Newton, Iowa. — Photo: Jack Kurtz

This puts Biden in a bind, between consolidating his left flank (or winning those Democrats who shunned Hillary Clinton in 2016) on the one hand, and the center, on the other, especially in key states like Michigan, Wisconsin and Pennsylvania that gave Trump his victory and also among Hispanic and African-American voters. His positions in coming months and the running mate he picks will define his strategy, and thus his likelihood of winning.

Biden's great disadvantage is, well, Biden. His age (he turns 78 in November), frequent political gaffes and an apparent distraction when answering questions all make him vulnerable. He has the support of numerous media outlets that often cover up for him, but there is no guarantee this could last. His prospective vice-president will thus play a key role here, as she might end up as president. The powers in his party are inclined toward an African-American woman for that post. And there are plenty of good candidates, though what is politically correct does not always translate into votes.

As for Mexico, what really matters isn't so much who wins or loses, but our overall relationship with the United States. Leaders come and go — on both sides of the border — but our neighborly relations go on. History has shown that the most important thing is not to lose sight of our priorities, because when we do, regardless of who's in charge at any particular moment, that's when the problems begin.

*Luis Rubio is the president of the Centro de Investigación para el Desarrollo (Cidac, "Research Center for Development"), an independent institution dedicated to research in economics and politics.