BOGOTÁ — It may have been the war in Syria, starting in 2011, that delivered the knockout punch. Either way, there are no obvious signs of recovery, and looking at things now, it's unclear if the victim is paralyzed, cataleptic or already dead, ready to be wheeled away.

The patient in question is none other than the UN Security Council, and its dismal condition reverberates throughout the entire United Nations system and its many agencies.

As thousands were killed in Syria, the body was effectively bound and gagged by the veto powers of Russia and China, which impeded humanitarian aid and other interventions. UN mediators repeatedly failed in their endeavors, having no tools to force an end to the barbarism.

We are suffering from the incompatibility of 20th century multilateralism and 21st century geopolitics.

Since then, the Security Council has failed to fulfill its main objective: to maintain peace and security around the world. In a string of conflicts and disorders — in Yemen, Libya, Iraq, Syria, Myanmar, Ukraine and in the Mediterranean — it is simply absent. And with the arrival of the pandemic in late 2019, the body virtually disappeared save for reports of the politicized process of electing new members, which alters nothing in its sterile prospects.

The UN and UN Security Council were created at the end of World War II in conditions that were the result of that broad conflict. Never a paragon of virtues, the Council nevertheless managed for decades to enact its mandate in different scenarios, defusing or preventing wars, channeling disaster aid or curbing epidemics. 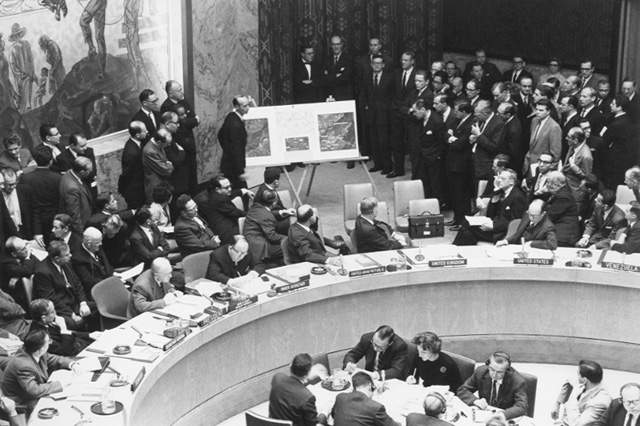 Meeting at the UN Security Council about Russian missiles in Cuba in 1962 — Photo: U.S. Government

The World Health Organization (WHO), which is ostensibly leading the world's response to the pandemic, is another hostage to political rivalries. The United States announced it would leave the body as debates arose over WHO's initial response to the emerging pandemic. We haven't come to the vaccine issue yet, which could turn into a competitive frenzy.

The body wasn't designed to take humanity to heaven but prevent it sliding into hell.

We are suffering from the incompatibility of 20th century multilateralism and 21st century geopolitics. The latter is marked by renewed great-power rivalries, lack of consensus in practically all international themes, absence of global leadership, the collapse of a supposed liberal world order, ballooning nationalism, governments brazenly turning to authoritarian methods, discord inside democracies, and reluctance of states to abide by the international norms that had hitherto prevailed, for better or worse. Talk of reforming the UN in these conditions seems deluded.

As the UN's second secretary-general, Dag Hammarskjöld, observed, the body wasn't designed to take humanity to heaven but prevent it sliding into hell. Let's hope it can do that at least, before the flames engulf us.