From India To Oxford: How Black Lives Matter Hits Home For Me

An activist and Oxford professor of anthropology of South Asia recounts her experience, and reflections, during a Black Lives Matter protest in the UK.

OXFORD — I won't deny feeling a twinge of trepidation at the prospect of being part of a crowd of people in England at this moment in time. Not just because of fears of a second wave of coronavirus, but also because I felt — after almost three months of sudden and severe quarantining — that I have lost the social skills and emotional energy to deal with large political gatherings.

I knew, however, that I just could not not go for the combined #RhodesMustFall Oxford and #BlackLivesMatter protest that was held on the evening of June 9th in Oxford. It would be impracticable for me to remain cloistered at home as, a couple of miles away, my students, colleagues and friends took to the street.

I told myself not to worry about crowds and the potential Covid-19 petri dish. This is Oxford, after all; even when our teachers' union calls a strike for grave reasons such as our vanishing pensions and rapidly deteriorating working conditions, only a handful of people turn up at the picket line. Furthermore, most of our students are absent, quarantining in their homes or will be busy with the examinations. Since the imposition of the lockdown in late March, Oxford has been eerily empty. At most, I told myself, there will be 100-150 of us at the protest.

I couldn't have been more wrong.

The first sign that this was going to be a much bigger event than I had anticipated was the sight of a helicopter hovering over Oxford. I could see as I biked over that it was flying above High Street — the very heart of Oxford — where Cecil Rhodes, considered an architect of apartheid and founder of Rhodesia, continues to loom above the entrance door of Oriel College. As I got into town I was stunned to see riot police and patrols atop horses everywhere, with several vans filled with back-up force arranged under the Bridge of Sighs.

Near the Radcliffe Camera, I walked past an elderly white woman on a bike who was talking to four police persons standing there. She was spitting in anger at the "irresponsible and stupid" protest against Oxford's "legacy." I rolled my eyes thinking, "Here we go."

As I arrived at a passage that leads to High Street, where the protest was already underway, I saw it was filled with people taking a knee for eight minutes and 46 seconds in honor of George Floyd. There was also the most "Oxbridge" protest poster ever — demanding more black rowers on boating teams at Oxford and Cambridge Universities wasn't exactly the radical politics I was hoping to see on display.

The first thing I learned about protests in the time of the coronavirus is how hard it is to spot friends/comrades due to masking and social distancing. The second thing I learned is that one should never underestimate what makes people come together to protest. Over the past winter in Delhi, I never failed to be amazed by how many people defied Section 144 and, despite lack of public transportation and with the very real possibility of being arrested or facing police action, took to the streets to protest the trinity of CAA-NPR-NRC, controversial Indian laws that put into question the citizenship of certain minorities.

We laughed with disdain at those who claimed the protestors were being paid to turn up for the demonstrations. What motivates human quests for justice and equality cannot ever be understood in such crass terms. It is only those who are themselves unmoved by such deeply cherished causes or ideals who would underestimate the visceral anger unleashed by acts of racism or communalism.

Perhaps the omnipresent fear of the coronavirus has changed how we come to occupy public space.

I wasn't particularly concerned about police brutality in the privileged and keenly-observed heart of Oxford, but I was almost certain the pandemic would keep whoever is left at the university at home. Besides the pandemic, there is also the shibboleth of "free speech" and debate that so many in Oxford bring up as reasons to keep Rhodes where he is.

These are tiresome, staid and repetitive discussions one still has to endure despite the superbly nuanced writings on the statue and Rhodes Must Fall movement by, amongst others, Tadiwa Madenga, Rahul Rao, Nakul Krishna and Amia Srinivasan. The original statement of the student-led 2015 Rhodes Must Fall Oxford petition possesses a compelling clarity. There were also powerful speeches delivered at the protest with, for instance, Simukai Chigudu, one of only seven black professors in Oxford powerfully explaining (from 1 hour 23 minutes) why we are all so "tired of colonial iconography."

Imagine my surprise then when I saw the swelling crowds on High Street. There were literally thousands of people occupying the main road and flooding the alleyways. Never before have I seen such a sight in Oxford and I wonder if I ever will in my lifetime again. 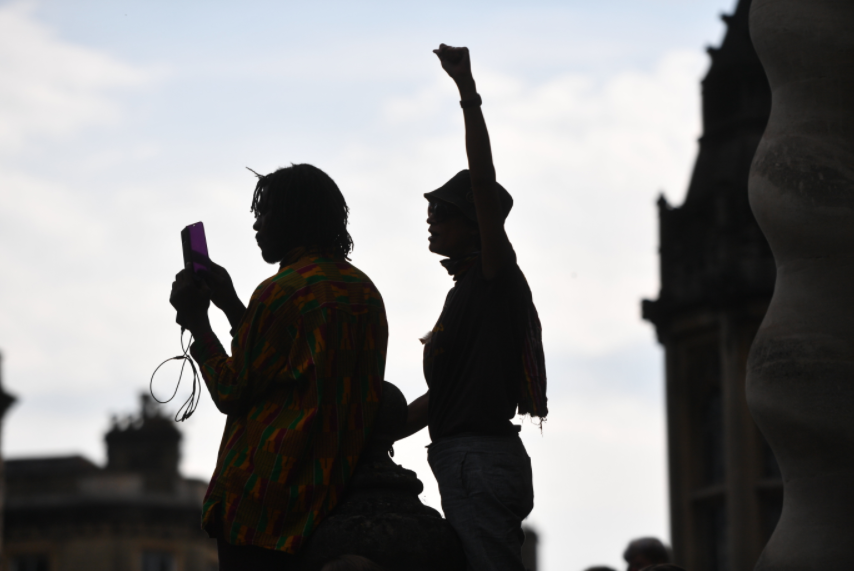 The third thing I learned is that it is totally possible to socially distance at protests or demonstrations without losing that invaluable and somewhat intangible sense of political togetherness. We were, more or less, careful to give one another space and weren't crowding, but yet it so felt like we were together. It reminded me faintly of being jammed into that small space at Jantar Mantar for the citizenship protests after we had been dislodged from other spaces in Delhi. But unlike Jantar Mantar, where we were packed like sardines, there was ample spacing here. Interestingly, this social distancing was not being imposed or monitored but was something we automatically adopted — perhaps months of isolation and the omnipresent fear of the coronavirus has changed, at least for the time being, how we come to occupy public space.

The resurrection of the Rhodes Must Fall movement in Oxford is a message of hope.

In 2016, Oriel College refused to remove Rhodes' statue. The official reason given was that it "was a reminder of the complexity of history and of the legacies of colonialism." There was widespread speculation that the statue wasn't torn down due to some wealthy donors who threatened to stop funding if the statue was removed. It is rumored that the gifts and bequests that were under threat of being withdrawn amounted to the tune of £100 million.

Four years on, the situation is different for several reasons. The first is the wider political environment in the UK. The Black Lives Matter movement is pushing this country, at long last, to confront its own past of slavery, violence and colonialism. The toppling of the slave trader Edward Colston in Bristol has been followed by the removal of another slave trader, Robert Milligan, in London. In Belgium, colonialist King Leopold II's statue was removed in Antwerp.

Even a few months ago, the discussion we are currently having on the politics of public memorials would not have been possible. This quick turnaround is a reminder of the fluidity of global politics as well as deep interconnections between what happens in, say, Minneapolis and Oxford. To those who are watching the seeming drowning of the struggle for equality in India with dismay, the resurrection of the Rhodes Must Fall movement in Oxford is a message of hope.

Other reasons why I think Rhodes will certainly fall are more local to Oxford. No doubt the dark forces that prevented Cecil from, as a poster said at the protest, "going for a swim" in 2016, will try the same tricks again. This time, however, the governing body of Oriel College, which acts as its trustees, is going to be under unprecedented pressure. After a rather uncharacteristic explosion by the Oxford faculty against the university's policies on pensions two years ago, the vice chancellor had hastily retreated on a decision she had made by citing the "depth of feeling" that was on display. Well, the depth of feeling against Cecil Rhodes and Oriel College was overwhelming on the evening of June 9. It was palpable in the air, in the chants of "Take it down! Take it down! Take it down!" and "De-de-de-decolonize" that resounded through the center of Oxford with over a thousand voices chiming in sync.

Perhaps the most striking thing for me about this protest was noting who was present. It was not just the sheer numbers but the types of Oxford dons and students who were signifying their support for the removal of Rhodes through their physical presence and slogans. And, I repeat, all this was in the face of a pandemic that has left us collectively exhausted and not a little terrified. There is a wide coalition building here — consisting of a motley bunch of academics, student bodies and local movements/organizations in Oxfordshire — who are all saying that it is time for Rhodes to be removed from the town. An environment is developing — globally, nationally and locally — that will make it exceedingly difficult for the university and Oriel College to not give in.

Once again, this aspect of the gathering in Oxford reminded me of the power of the protests in Delhi. It wasn't just the usual suspects of left-liberal students, activists, academics that I was encountering at the protests. As the poster theme "Things are so bad that even X is here" went, there was an unusual sociological and ideological combination of individuals and groups in the anti-CAA protests, which is what gave it teeth.

Another striking element of the Oxford protest, which bodes well for its success, was the connections it was making in the slogans, posters and chatter, as much as in the speeches. There was a true internationality among the causes, from George Floyd's killing and Black Lives Matter to Kashmir and Palestine. The most striking thing for me as a teacher was how strong the call was to decolonize the university, reform the curriculum, question and challenge whiteness and properly learn about Britain's imperial past and systemically racist present. This is why the Rhodes Must Fall movement is so powerful and essential — it isn't really about a statue as much as it is about how we produce and disseminate knowledge and what sort of a university, at its very ethical and pedagogical core, Oxford can become.

As a poster noted, "All Rhodes lead to the river." There is no doubt in my mind that all roads for Cecil do lead — if he is lucky — to a museum. No amount of riot police positioned in, around and atop Oriel College can protect him from the forces that are gathering for his imminent dislodgement.

And the final, unexpected, lesson I took away from this protest: The best (and cutest) social distancing tool is a dog.

*Nayanika Mathur, an associate professor in the Anthropology of South Asia and fellow of Wolfson College at the University of Oxford

Europe On Iran: Why The Appeasement?

The European Union should explain why it is doggedly conciliatory with a regime in Iran that repr...