Beyond Resistance: What India Needs Now Is A Revolution

As the "center" continues to shift rightward — in India and elsewhere — people need to do more than just push back against the powers that be.

NEW DELHI — We are apparently resisting right now — in India against citizenship laws and procedures, in Hong Kong against the fugitive offender's amendment bill, and across the world against border controls. But is it enough?

In political theories, resistance came to be the most popular concept since the passive resistance model of M.K. Gandhi showed success, and the romance of the European resistance to Nazi occupation became well-known through literature. Today we use "resistance" to designate nearly every political activity, or activism, with an ethical claim. In fact, we assume that all the good people are resisters.

In a metaphysical sense, resistance is at least as fundamental as existence. These two terms came from the same etymological root sistere, meaning "to take a stand." Interpretation of things on the basis of "existence" would imply that all things stand indifferently "out there." But when we interpret the world through resistance, it shows that all things stand against each other, or resist each other, in being.

When something slows another thing down, or at the limit halts the progress of another thing we say that there is resistance. This kind of resistance is very useful, for it performs a work, or a function. When the flow of electricity is resisted by the filament of a light bulb it creates heat and light. Or when the tires of an automobile enjoy friction with the road we can maneuver it, accelerate it, and apply the brakes effectively. Now we can see that resistance is found within a system — electric or mechanical — and performs various functions in it.

In politics, we should investigate if our resistance is performing a work for someone else, a work that we did not intend, and is thus going well against our ethical claim. In the familiar example of factory workers resisting, we can see the way resistance often plays out. The factory management increases work hours and reduces wages as a part of cost reduction measures. The workers go on strike, resisting the factory management. Eventually there are negotiations, at the end of which the workers settle for a marginal increase in wage without any change in the increased work hours.

Resistance often results in the resisters resembling the opponent.

As we know, inflation eats into the value of currencies everyday, which means that the factory would not lose much by way of increased wages. But the increase in work hours surely adds to the profit for the management. That is, economism as resistance leaves that system qualitatively unchanged, and at best functions as a regulator slowing and hastening the innate tendencies of the system.

In the above example, resistance appears analogous to the militaristic notion of defending a terrain. That is, when something we perceive as malicious approaches the objects, institutions and terrain we created, we resist it. To give a contemporary example, we are today talking about resistance on behalf of the values of the constitution of India, which we must note is conceptually different from the Republic of India. The republic is a promise we make to each other that we will strive together to realize certain values — socialism, egalitarianism, secularism, climate security, destruction of the caste system, intolerance to racism and patriarchy.

In world politics as well as in India, the reality of all political systems might be that they are tending towards the critical limits of their innate possibilities — through dismantling of the universities; leaving workers without pensions; reducing the health care benefits to the people; privatization of the police and the military; and corporate surveillance displacing "intelligence gathering."

We should take note of a certain fact of the last few decades: Politics has been played on the basis of the co-ordinates of "left" and "right," where the line between the two has been drawn invariably by the "right." The notion of "centrism" then implies that a resister takes the space previously occupied by the right, who has now shifted to a position farther rightward.

In India, in recent years, we have started resisting the Hindu right's version of fascism with a "resistant nationalism" — by waving the national flag at all times, ensuring that Muslim protesters sing "Vande Mataram" despite its obvious religious imagery, and politicians of the opposition visiting temples and reciting religious prayers at press conferences.

But something repugnant took place on Thursday. A young woman, Amulya Leona, chanted slogans and wrote posts for the well-being of all countries and she was booked for sedition. This took place at a resistance event organized under the banner "save the constitution," and some of the organizers took offense at this internationalist young woman. Often those who lag behind in moving towards the ever right-shifting "center" (always drawn by the right) are "thrown under the bus." 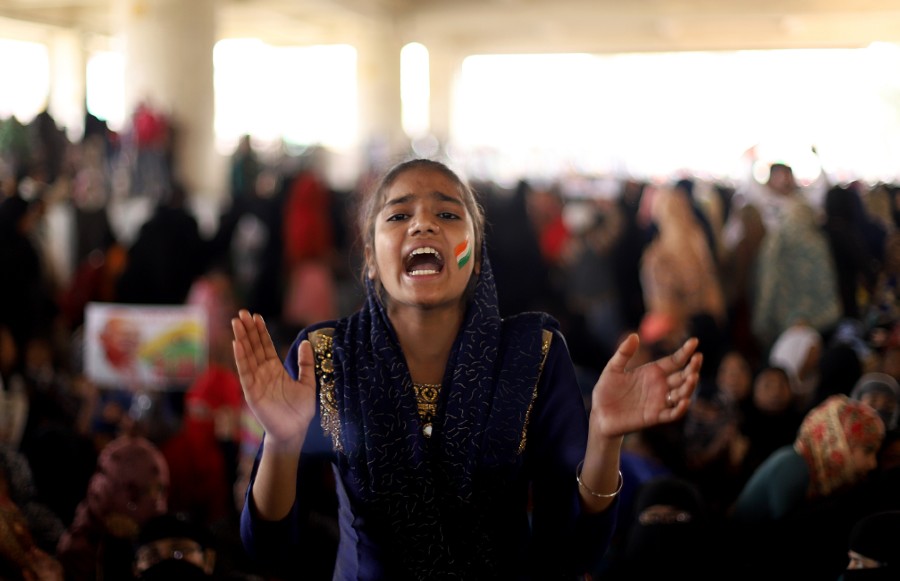 Resistance often results in the resisters resembling the opponent — "The creatures outside looked from pig to man, and from man to pig, and from pig to man again; but already it was impossible to say which was which."

The romance of resistance lies in the social illusion it provides with the noise of action, which is never political action, nor transformative participation. Instead, resistance often lets political systems reach the limits of its innate tendencies to the point of death while regulating their decay. Therefore, resistance creates heroes who knowingly regulate the innate tendencies of the system while seeming to be opposed to it. The classic example is the union leader who takes a cut from the workers and the factory owners. Resistance can be good business.

The most popular interpretation of resistance is "civil disobedience" which presumes that the natural duty of a human being is to obey. When the circumstances are not ideal we are supposed to make the exception and disobey under the condition that everything is "civil." In this case "civil" refers to the kind of relation between the agents of the state — the ministers, judges, and the police — and those who disobey; that is, the agents of the state remain obedient to the law and human rights conventions, and the protestors obey all laws except the one they choose to disobey.

For example, a crowd seeking to disobey the law against "freedom of organization" is expected to obey all laws except that one. The difficulty today with this notion of "civil disobedience" lies entirely in its premise of universal obedience. As we have argued, even the struggle against the CAA requires disobedience of not just the unjust law and its associated processes, such as the NRC and NPR, but also disobedience of the rules of caste oppression. Unless it tends towards universal disobedience — of all norms, codes, rules, constructs that keep the oppressive system intact — "civil disobedience" will eventually dissipate.

Concepts like "civil disobedience" and even "non-violence," which we recognize under resistance, work well in an idealized liberal state in which persuasion on the basis of moral hegemony changes the course of history for "the good." The trouble is that liberalism is founded on the superstition that all possibilities are equal in value and that they can co-exist in politics. As Martin Buber tried to explain to Gandhi, we know that the Jewish people and the Nazi state could not co-exist.

The difference between resistance and what we can call "revolution" for the time being can be explained through the encounter between M.K. Gandhi and P. C. Joshi in 1944. Joshi was the first general secretary of the Communist Party of India. Gandhi the resister feared the approach of "western civilization" through colonial rule, which for him reached the ultimate limit at the point when it began to transform the 'eternal' caste order of Indian society, which he called "Hindu." Gandhi spoke of the feared ultimate event during a conversation with Sardar Patel at Yervada jail in 1932 — "the untouchable hooligans will make common cause with Muslim hooligans and kill caste Hindus." (emphasis added)

In this case, Gandhi was being a "bourgeois thinker" in the sense in which Wittgenstein used the term — "he thought with aim of clearing up the affairs of some particular community." Wittgenstein had opposed the "bourgeois thinker" with the philosopher who must be indifferent to the interests of communities, because the philosopher is concerned with the very meaning of "interest" and "common."

The most popular interpretation of resistance is "civil disobedience" which presumes that the natural duty of a human being is to obey.

P.C. Joshi was involved in the project of "people's struggle" to bring an egalitarian society, to create something new rather than resisting changes to the old. Gandhi, who had a limited conception of the people as "caste Hindus," found it curious and asked Joshi who these people were. Joshi responded: "People in people's war means all peoples the world over without exception."

This "without exception" implies that "people" is not just the sum of all men and women but the sum of all the possible inclinations and all the impossible desires of humankind. This drive for the infinite which we find in Joshi is something that confounded Gandhi but which is an essential for change. For this moment, then, revolution implies this: We must go beyond "resistance" to struggle for people, without exception.

*Shaj Mohan is a philosopher based in the subcontinent.

For The Economy, Lockdown Is Worse Than War

A view from India on the prospects of major upheaval in the short-term and the possibility of a l...

India's Anti-Muslim Violence Is Part Of An Ugly Pattern

By now, many across Delhi, and Sikhs across the world, are retriggered by memories the pogroms of...