A Wrestler's Execution, Proof That Iran's Regime Is Nervous

Vigil held after the execution of Navid Afkari on Sept. 14 - The Post Millennial

Under pressure both at both home and abroad, the Islamic Republic's clerical regime is using capital punishment to sow fear and force compliance.

LONDON — Ignoring countless pleas for mercy, the Islamic Republic of Iran recently executed Navid Afkari, a former wrestler convicted of killing a state agent during street protests in 2018. The killing is part of a vicious strategy, one that targets detained opponents but whose real objective is to cow a restless population.

In late December 2017, Iranians began a new round of protests against the post-revolutionary regime in power since 1979. These were extensive, and resurfaced to a greater or less extent in July 2018 and October-November 2019.

In the meantime, the leadership is also under pressure abroad and impedes itself with dysfunctional economic policies.

In response, and presumably on the advice of some of their putative ideologues, either reformist or hardline, Iran's rulers decided to clamp down on all dissent. The state is using its depleted forces to suppress demonstrators and wants them to know: Executions are on the agenda.

To give these executions legal grounding, the judiciary has turned to one of the regime's threadbare ploys, which is to charge detainees with murder, armed insurrection or "waging war on God," whom the clerical regime claims to represent. Such charges ease the way for the "lawful" elimination of opponents.

Executions are on the agenda.

In all of these cases, the dossiers are characterized by blatant juridical irregularities. Objections in the nine cases included, among other things, forced confessions, defendants rectifying confessions before the judge but outside the courtroom, an absence of solid evidence or eyewitnesses for the charges, and abuses committed against defendants while in custody. 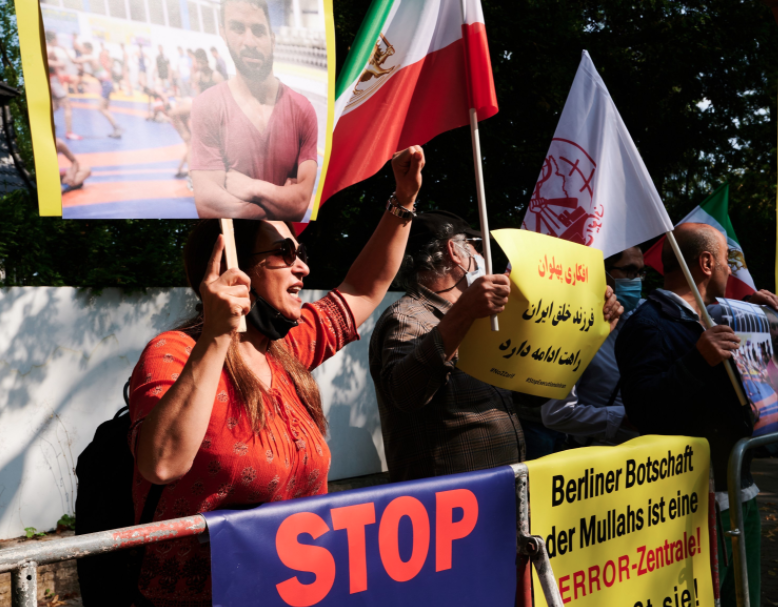 Anti-governement protest in front of the Iranian embassy in Berlin on Sept. 12 — Photo: Annette Riedl/dpa/ZUMA

The sentence for Afkari reached more quickly than the others, and briskly carried out on Sept. 12. He was put to death in secret, without his lawyer's knowledge and without a final family visit, as the laws of the Islamic Republic allow.

There is a direct link between anxiety, on the part of a regime like Iran's, and brazen suppression. The more frightened they feel, the harder they strike. The execution of Afkari — and in the face of so much opposition — is a prime example. And the message it sends is clear: We'll kill if we have to!

Never mind that in doing so, the regime is fueling even more hatred and ire against itself. For the leadership, it doesn't matter, because in their mind, any sign of weakness may prove far too costly.

The result is that no campaign or civil-society push has had any obvious impact in convincing the regime to change course. And that's because Iran's rulers think they can use an overdose of fear and despondency to create paralysis in the country.

Meanwhile, inside the country — and for the first time — many artists have openly sided with public opinion. And outside the country, outrage in Europe forced the regime to postpone a scheduled European tour by Iran's foreign minister.

On the other hand, Iran's usually bickering reformists and conservatives, sensing they must justify the system that nurtures them, came together to say Afkari had been executed for murder. They cited the law of talion (Qesas), sanctioned by religion.

The E'temad newspaper, a principal mouthpiece of the reformist camp, reproduced Afkari's forced confessions on its Twitter account and termed his execution a lawful retaliation! The conservative Tasnim news agency used similar terms.

That some reformists questioned the killing at all is only because it became public knowledge. No doubt nothing would have been said had it been a secret execution, like those of hundreds of other Iranians.

Nor is public opinion fooled anymore by the reformist label. Reacting to the protests of early 2018 and late 2019, both sides denounced demonstrators as "rioters," vandals and "sympathizers of foreign powers," and demanded a "firm response."

In 2018, a prominent reformist pressman Abbas Abdi urged the state to act firmly against protesters. Another reformist, Hamidreza Jalaypur, called them "vultures." The two factions morphed long ago into the same, illegitimate nomenklatura. Both are concerned when they hear angry crowds chant: Reformist or Conservative, It's All Over!

In Lebanon and Iraq, two countries that Iran's clerical regime has long tried to control, some Sh...