Several reform-minded Iranian economists say President Rouhani's government has been unable to curb inflation, shore up the currency or even absorb liquidity through constructive taxation.

Iranian economists are sharpening their criticisms of government policies on inflation and excess liquidity, in an economy distorted by decades of arbitrary decisions, cronyism and intermittent sanctions imposed by Western states.

Hossein Raghfar, a lecturer at the Alzahra University, a public university for women in Tehran, says the state had become just a "big machine" dishing out perks, favors and "status" to its supporters. He said "it gives out positions to its affiliates and fits them into this structure, so they can exploit its resources. That is not what a modern government does."

The reform-minded economist said the government should be taxing stock market transactions. Had it taxed 10% of the revenues generated by the Tehran bourse in the first two months of the year (the Persian year that began on March 21), he said, it would have earned the public coffers the equivalent of some $11 billion (50,000 billion tumans) in revenues for the national economy and the public sector, "without in any way obstructing participation in the capital market."

That's what modern governments do.

A typical investor with the equivalent of some $2,000 worth of local currency would have turned it into $10,000 in that two-month period, he said. The government might have taken half, and "with this income the government could have provided welfare services for others who are not able to invest in the capital market. It could build homes, expand healthcare and improve education services. That is what modern governments do everywhere in the world. They provide people with public services with these revenues."

Another economist, Sa'id Lailaz, previously a firm supporter of the government of Hassan Rouhani, believes the president's "mistakes at the start of the sanctions period wasted $30 billion in forex reserves and 80 tons of gold reserves." 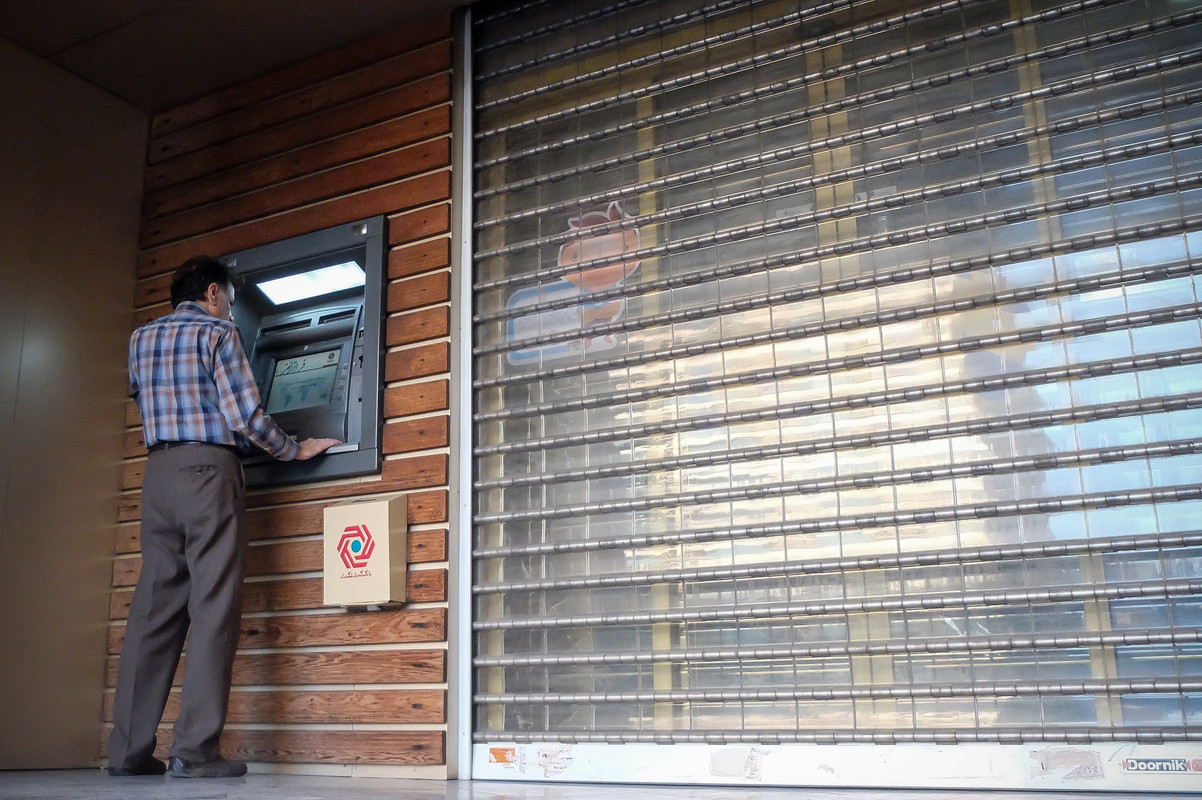 Taking cash from an ATM in Tehran — Photo: Rouzbeh Fouladi/ZUMA

He said Rouhani made the "unforgivable" mistake of selling subsidized dollars inside the country in March-April 2018 to shore up the currency and counter forex shortages. He did stress that he hadn't made any other major errors, and prevented the economy's "collapse" due to U.S.-led sanctions.

Musa Ghaninejad separately told a local business daily in late August that the government had been mistaken in "encouraging people to enter the stock market." Writing in Donya-ye eqtesad (World of Economy) on August 26, Ghaninejad said the government had to rely on "economic science," and officials should stop dismissing economists as "theorists" with no idea of real living conditions.

He said "some officials have the mistaken idea that you can control inflation by channeling liquidity toward the stock market, which is generally absorbed into the secondary capital market. Essentially it means transferring money from one bank account to another." Flooding the market with subsidized dollars was another mistake, he said, based on erroneous assumptions that the dollar had a "real price," to be determined by the government. In the midst of sanctions choking Iran's exports, mainly oil, he believes the government cannot assume it can fully meet growing domestic demand for foreign exchange.

There were only two swift ways to curb inflation, argued Ghaninejad: either to issue or auction bonds, or let the markets set the nominal interest rate, which would lead to "positive" rates that would shut money into the banking system and prevent turmoil in the securities market.

"As long as politicians and those with power do not accept the real function of prices in the market and do not abandon the illusion of having 'full knowledge and power' (over the economy)," he argues, "there cannot be a bright horizon for the Iranian economy."