A Progressive Manifesto For Europe To Protect Its Borders

The do-nothing approach to migration being taken by the new Spanish government and others in Europe is untenable, and plays right into the hands of racist far right.

BERLIN — I was in continental Spain and in the Spanish North-African enclave of Ceuta a few days ago. I looked at how the south of the country was reacting in the face of hundreds of migrants who have started to come from across the sea every day. They and I were happy they'd survived the journey.

I also talked to the people who'd arrived. Most of them are from West Africa. They told me that they'd come to Europe because of poverty in their homeland. A young mother held her two small children in her arms and said, "I am here because of them. They should have it better than I do."

I understand and sympathize with these people. But even I must admit that it cannot go on like this. We need to be realistic and say things the way they are: The vast majority of Africans who are pushing for Europe have no right to asylum here. They are economic migrants who aspire to a better life.

I would describe myself as a humanist. I feel for the people who want to go to Europe, for whatever reason. Because if I were them, I'd probably do the same. The only thing that really distinguishes me from them is my luck of being born in the First World, something for which I'm not responsible.

That's why I find it difficult to call for our continent to close its borders — and I certainly wouldn't have done so a year ago. But everything else, in my opinion, is a tunnel-vision humanism, blinding itself to the motives of the people who come as well as to the interests and concerns of Europeans. This can't go well. And it's not going well. All across Europe, resistance to open borders is growing.

For the first time in post-War German history, a right-wing party has a real and burning present-day topic they can use. And they're having greater success than ever before because of it. My recent trip to Spain and the trips I've made in recent months to Hungary, Bosnia, Croatia, Italy, France, Greece, Bulgaria, Slovenia and Austria have made it clear to me that things cannot go on like this.

Hundreds of migrants are currently sitting in inflatable boats on Moroccan beaches every day and paddling towards Spain — an almost hopeless undertaking. The Spanish maritime rescue service takes the people and brings them to the Spanish coast. Adolfo Serrano, head of the sea rescue unit in Tarifa for 23 years, told me: "I've never experienced anything like it."

For the first time in post-war German history, a right-wing party has a topic they can use.

The economic migrants who are coming believe that they will be living in peace and prosperity in Europe. They don't know that no one's waiting for them, that many of them will end up in misery because their request for protection will be rejected. This daily influx of people, as can currently be observed in Spain, helps neither Europe nor the migrants themselves. You just can't pick a country to live in. No social system is designed for this.

And yet the new Spanish government of Socialist Prime Minister Pedro Sanchez has been presenting itself as a first-class benefactor since taking office in early June. Sanchez decided to welcome the rescue ship Aquarius with 600 migrants on board, after Italy, Malta and France blocked it from their ports. But these people don't want to stay in Spain, so the country doesn't actually have to take care of them. It was just for show.

And these days, when the south of the country urgently needs help to cope with the surge, the government in Madrid is looking on idly as local mayors sound the alarm bell. The situation is "absolutely under control and controllable," the interior minister, Fernando Grande-Marlaska, insists.

Fearing 'the next storm'

Not that he went there to see for himself. Because if he had, he would have seen that in fact, nothing is under control; that there isn't even enough housing for those coming on the rescue ships; that the frustration of the people of Andalusia, who are themselves affected by an economic crisis, keeps on growing unremittingly.

But none of this counts. It's all about keeping up appearances, sending the message to the world that with a lot of humanity and nice words, this crisis can be managed. My visit to Ceuta, the Spanish exclave in northern Morocco, also showed me how much nonsense this is.

I was there on July 26, a couple of hours after hundreds of migrants stormed the border fence and attacked police officers with burning lime, excrement and flamethrowers. More than a dozen officers were hospitalized, and more than 600 Africans managed to enter Spanish territory. 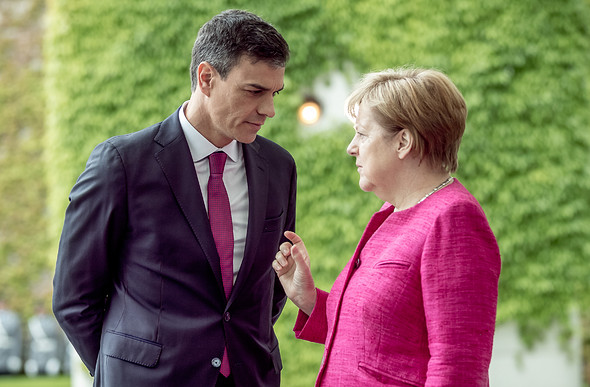 Police officers I talked to told me they were afraid of the next storm. They said they aren't allowed, under any circumstances, to react by force to aggressions from migrants. "This is our only protection," one of the officers said, showing me a gas mask. "In the eyes of Europe, we, the border guards, are the bad guys and the migrants are the good guys."

I thought that what happened in Ceuta would provoke a debate about the disastrous conditions on the EU's Spanish external borders. Instead, the Sanchez government is now discussing removing the barbed wire on the border fence to reduce the risk of injury to migrants. What a fatal signal to send! It's a slap in the face to the Spanish police.

And it will only embolden the migrants, sending out the message that it's okay to use violence to enter. It will create a magnet effect, encouraging people to set off, therefore putting their lives in danger — there's nothing humane about that. But doesn't it sound nice, to take down the barbed wire?

We need to call a spade a spade.

Because there are still many tunnel-vision humanists like Pedro Sánchez who are building cloud-cuckoo-lands, the sudden right-wing boom continues across Europe. They are the winners of these ludicrous policies. Because of this ignorance, which is still very much anchored in the minds of many political decision-makers — including in Germany — the continent is drifting further and further to the right.

We must ask ourselves: Do we really want to be governed by racists or by people who joke about the deportation of 69 Afghans? By a Matteo Salvini, who uses the words "human flesh" to describe refugees on boats? By politicians like those of the AfD, who play with people's concerns and call sea rescuers criminals? Do we want the end of Schengen, the end of freedom of movement within the EU? Nationalism instead of European solidarity?

If not, then something must change quickly. We need to call a spade a spade. Those who reach Europe's shores are those who have the money and the strength. But they're not the ones who are suffering the most. I was in Bosnia-Herzegovina a few weeks ago, and on Lesbos a few months before that. There are many war refugees there, people who need our help. Their situation is one of pure despair. These people have neither the money nor the strength to go forward.

For the suffering of these people to become apparent and for measures to be taken, radical steps are needed first: securing Spain's external EU border, for example through a deal with Morocco. And certainly with a further reinforcement of the border fence in Ceuta.

It must be considered whether boat refugees can be brought back to Morocco after they have been rescued — also in order to prevent further deaths in the Mediterranean. And then (or, even better, at the same time) focus on those who need our help. The resettlement deal between Germany and Turkey is a good starting point.

What's more, asylum centers should be set up immediately at the EU's external borders, where asylum applications could already be roughly pre-checked. In addition to combating the causes of flight, there must be more legal channels to come to Europe. If we can better control who comes to us, we can help those who actually need help. People at the gates of the continent must not be forgotten. That must not happen.

I am convinced that it won't come to that. I believe in philanthropy and solidarity in Europe, that there is an interest in the suffering of others. Compassion. The will to help. Europeans who vote for parties like the AfD are currently in a minority. But for how long? We are not a continent of racists. But to act appropriately, we need to accept what's really happening.

A new study in Spain found that middle-aged women are by far the most likely demographic to be su...

A chocolate museum nestled in Spain's small town of Astorga reveals how an exotic delicacy became...