Toward A More Humane Response To Migration

Migrants rescued near the coast of Malaga, Spain, on May 23 - Jesus Merida/SOPA Images/ZUMA

The world can do a lot better than incarcerate migrants en masse, or turn away boatloads of desperate passengers, argues former Chilean president Ricardo Lagos.

SANTIAGO — We are gradually becoming more nomadic in our time. Young people are increasingly moving abroad with the idea that, by getting to know other countries and cultures, they will enrich their transition into adulthood. But there are also the others, the ones who place their hopes for a better life on a flimsy raft or a midnight dash across the border.

Humans have always been this way: seeking new horizons. That is why migration can only be understood as an ancestral, acquired right. And from this perspective, we are outraged to see the tragedies related to contemporary migration.

Has Europe forgotten that it grew in the 19th century because of the outward migration of workers it couldn't feed and the exodus of people persecuted for religious and political reasons? Does the United States not recall that it owes a good deal of its growth precisely to immigration? The ability of the United States to assimilate Irish, European and now Latin American and Asiatic cultures has been notable. Let us add all the Africans who arrived as slaves and whose emancipation ennobled the country.

We must widen our outlook and understand the migrant.

For us in Latin America, immigration is intertwined with the very origins of our various republics. In Argentina, Uruguay and Chile, it is at the core of the national identity. European migrants began to arrive here a century and a half ago. Some sought a better life. But in many cases, they were fleeing the old continent's conflicts: Spaniards and Italians from internationalist workers' movements; Spaniards fleeing the Third Carlist War; exiles from German Chancellor Otto von Bismarck's 1878 edict banning socialism.

Moving into the 20th century, millions more arrived — from Poland, the Ukraine, Palestine, the dying Ottoman Empire and other places. And now, in the 21st century, the process continues. Argentina has an estimated 2 million immigrants, according to government figures. Chile is absorbing a fair portion of this flux as well. Years of economic growth and political stability have made it an attractive destination, and migrants currently constitute 2.7% of the nation's population. That is more than half a million people, 70% of whom are from South America.

Why go back and look at these facts and figures? Because they tell us that for over a century, we have been conscious of what migration is and what it means to the future of our societies. That is why we condemn President Trump's initiatives, why we take issue with how states like Malta or Italy are responding to migrants crossing the Mediterranean Sea.

Since mid-April, the Trump administration has implemented its zero tolerance policy on the U.S./Mexico border and the Office of the Attorney General has decided to jail, not just hold, anyone entering the country without papers. Violators are charged with a felony (rather than just a misdemeanor), meaning they are sent to a Federal prison. 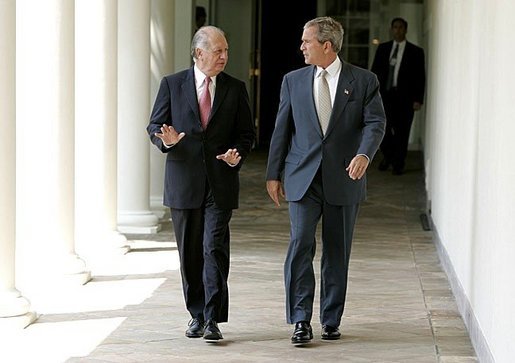 Former Chilean president and author of this article Ricardo with then U.S. President Bush in 2004 — Photo: White House

That, in turn, means the prisoner cannot be accompanied by his or her small children — bringing brutal consequences. Mexicans and Central Americans have borne the brunt of this harsh policy of imprisonment followed by immediate expulsion.

While Trump has revoked the policy following a barrage of criticisms, the situation remains "chaotic," as many will testify, when it comes to clarifying where the minors are and how they are to be reunited with their families. Simply put, Trump's policy is inhumane, and that — more than the legal issues involved — explains why it has been so universally criticized. There's also the fact that it began just when the U.S. government announced it would abandon the UN's Commission on Human Rights.

Forge welcoming and inclusive societies — societies of, and for, the 21st century.

Something similar is happening in the Mediterranean, where weeks ago, Malta and Italy announced they would turn away the refugee ship Aquarius, with 600 on board. In the case of Italy, the new right-wing ruling coalition's hand was evident. The boat has been received in Spain, but as the French president and Spanish prime minister have pointed out, this is a matter of concern to the entire EU, not just to its southern countries.

Expect more boats crossing the Mediterranean as poverty and hunger assail the Africans.

What does all this tell us? That migration has become a key part of the international agenda and a challenge requiring clear policies in response. We must widen our outlook and understand the migrant not just as social burden or political pawn, but as a source of economic development.

Here in Latin American, we must become a receptive region, open to immigration and adopting policies geared toward human rights and cultural interactions. These should be designed to help integrate people and regulate migratory flows. Let us learn to observe the other and foment education systems that help us to relate better to diversity, seeing it as an opportunity not a threat. That is the only way to forge welcoming and inclusive societies — societies of, and for, the 21st century.

Countries like Argentina, Chile and Mexico have begun charging a value added tax (VAT) on digital...

Chile, The Deep Meaning And Real Limits Of A New Constitution

Forging a new constitution to replace the one from the Pinochet era is necessary for Chile to mov...